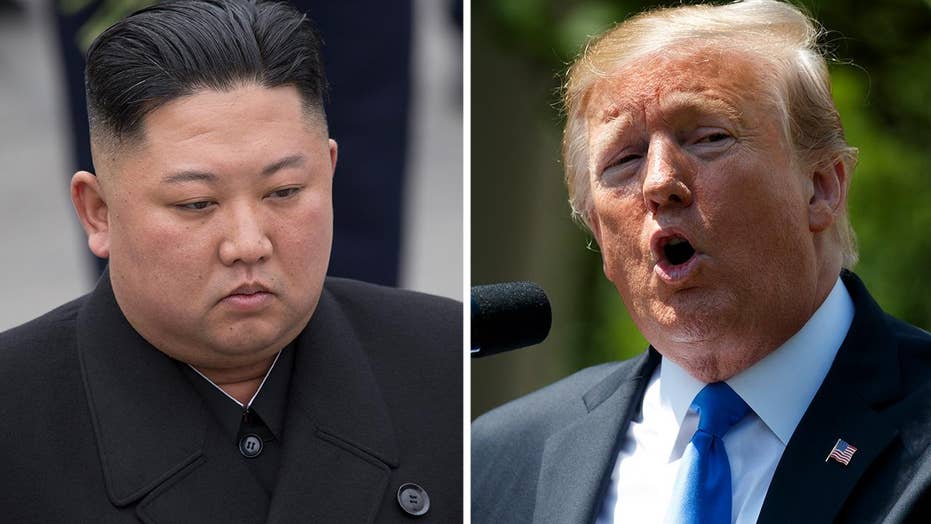 North Korea’s launch Saturday of what appear to be short-range missiles is disturbing, but we shouldn’t overreact and conclude the move will end President Trump’s diplomatic efforts to get the North to give up its nuclear weapons and long-range missiles.

In fact, Trump may still win his high-stakes bet that he can end North Korea’s status as an international pariah and open the way for normal diplomatic and trade relations if the communist nation accepts denuclearization.

According to the South Korean military, the North launched the unspecified projectiles Saturday morning and they flew between 42 and 124 miles before falling into the sea between North Korea and Japan.

Does this mean North Korea is slowly heading back to the days of dangerous provocations by testing advanced military hardware – and perhaps even another nuclear weapon?

It’s too early to tell.

North Korean dictator Kim Jong Un is a young man and he is playing a long game. He considers nuclear weapons his insurance policy against a U.S. attack now and for decades to come.

A deal is very much within President Trump’s grasp – and he might just be the only person who can make it happen.

But Trump has done something no other U.S. president has done. Instead of matching Kim’s aggressive moves, he is showing restraint and showing he won’t get baited in any way.

Trump is trying to reassure Kim that he is still willing and able to find a diplomatic solution to the dispute over denuclearization, despite the failure of the two leaders to come to an agreement in summits they held in Singapore and Vietnam.

“Anything in this very interesting world is possible, but I believe that Kim Jong Un fully realizes the great economic potential of North Korea, & will do nothing to interfere or end it,” Trump tweeted Saturday. “He also knows that I am with him & does not want to break his promise to me. Deal will happen!”

I agree completely. A deal is very much within President Trump’s grasp – and he might just be the only person who can make it happen.

What makes Trump well-suited to negotiating a deal with North Korea is that he is a realist and pragmatist. Because he is not a career politician, a diplomat or a trained political scientist, his ideas are not limited to the conventional thinking that has failed to halt North Korea’s march to become a nuclear power.

As with many things in life, when old approaches fail repeatedly to solve a problem, new approaches need to be tried.

Trump, despite decades of tensions with North Korea, was the only U.S. president to have a sit-down with a leader of the North – something that was considered a radical concept a year ago.

And while North Korea still seems reluctant to give up its nuclear weapons, there is a recognition by diplomats in Seoul, Pyongyang and Washington who I have spoken with over the last few months that we can never go back to the dark days of 2017, when war between the U.S. and North Korea seemed like a real possibility.

But now the time for words alone is over. Now is the time for bold action on all sides, as it seems America, North Korea and even South Korea are becoming frustrated with the recent stalemate in negotiations.

What we face – and must overcome – is a crisis of trust. After years of suspicion, threats of nuclear war and starts and stops in diplomacy, how do these different nations that all fear each other’s intentions reverse course and embrace peace?

First, we should listen to what North Korea has been telling us it wants from the United States. Recently, the Kim regime has stated it is willing to move away from demands for economic sanctions relief and instead is now seeking security guarantees from America.

Kim and his inner circle want assurances that they and their nation are under no threat by the United States before they give up their nuclear weapons.

North Korea has been asking for such assurances for decades. In fact, Kim brought this up in his recent summit with Russian President Vladimir Putin.

But how could Washington provide such assurances without drawing down U.S. forces in South Korea or in the wider Indo-Pacific?

America could work to address an area of dire need that may eventually lead to massive instability and even regime collapse in North Korea – growing food shortages. According to Reuters, official food rations are now 11 ounces per day for North Koreans because of serious food shortages now plaguing the country.

South Korea’s regional governments have already allocated the resources needed to assist the North and could begin food distribution quickly, ensuring mass starvation does not set in. This can be done in a way to ensure that any food aid given doesn’t go to Kim’s armed forces.

Such a move would show Kim we have no intention of invading or deposing his regime.

Next, its past time to begin utilizing the South Korean government much more effectively, given the unique position it holds in acting as not only a facilitator of talks, but as the only party both Washington and Pyongyang can trust.

In fact, South Korea’s President Moon Jae-in could very well end up being the most important player in forging a lasting and durable peace on the Korean Peninsula.

For example, just before the Trump-Kim summit in Vietnam, Moon offered to move quickly on inter-Korean economic projects that would be worth tens of billions of dollars to Pyongyang.

However, Washington and Seoul would never give away such a prize for free. If North Korea once again agreed to dismantle the entirety of its Yongbyon nuclear facility, economic carrots could be granted as a reward to Pyongyang in stages to ensure compliance as the facility is dismantled.

That’s a win-win proposal that no one should reject. It could be structured in a way that has snapback provisions in the agreement, so if North Korea were to cheat on the deal, all economic incentives would stop immediately.

Finally, there is one thing above all else all sides should agree to that would lay down a strong foundation of peace and build trust: ending the Korean War once and for all.

Estimates are that the horrific conflict took as many as 5 million lives from 1950 to 1953. But the war was never concluded in any sort of formal diplomatic way. It was only halted by an armistice.

There is no reason that America, South Korea, China and the United Nations cannot sign a formal peace declaration finally putting an end to this dark chapter of history.

This – and perhaps only this – can prove to all sides that nations capable of bringing lasting peace to the Korean Peninsula are serious, having taken an irrevocable step that would be hard to reverse. Nothing builds trust more than making history and putting the past behind us.

A peaceful Korean Peninsula is not an impossible dream. President Trump has proven he is a man of action with the ability to approach old problems in new ways and find solutions. We should all hope he can succeed in doing so now in dealing with North Korea.