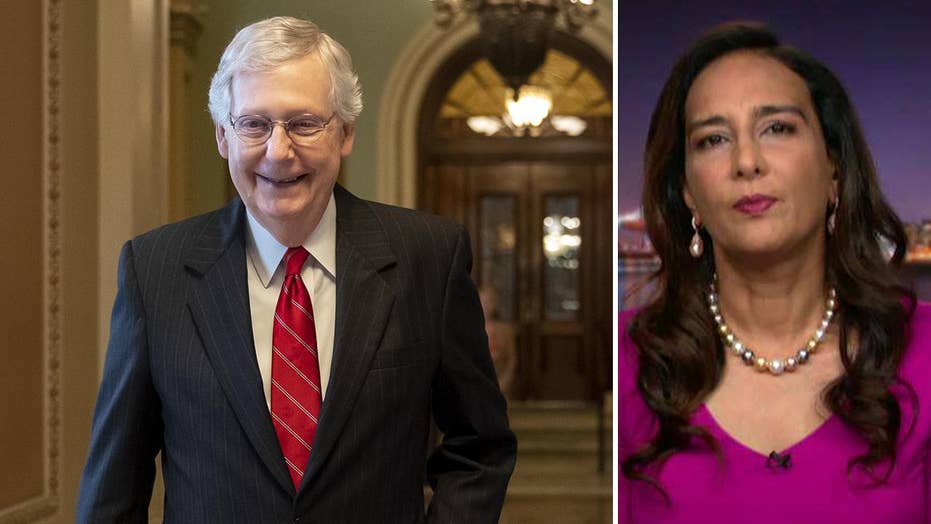 Protests by Senate Majority Leader Mitch McConnell’s campaign and his Republican supporters forced Twitter to back down Friday and reinstate his “Team Mitch” account and allow it to display a video of protesters threatening violence against him.

But this victory by the most powerful Republican in Congress is an exception to the censorship suffered by many others as a result of Big Tech’s anti-conservative bias and increasingly brazen interference in the political arena, which pose serious threats to our democracy.

It would be a big mistake for conservatives to think the McConnell victory means we should let up on our efforts to fight the bias of social media companies and their manipulative machinations that are hindering our freedom of expression and tilting the political playing field in favor of Democrats and others on the left.

Twitter suspended McConnell’s campaign account Monday because the account posted a video of screaming protesters who had assembled outside the majority leader’s Kentucky home and vividly discussed inflicting physical violence on him.

Other conservative accounts that shared the video – which showed people yelling, among other things, about murdering McConnell by stabbing him in his heart – were also banned.

Republicans threatened to stop doing business with Twitter before the company bowed to pressure.

Twitter has taken no serious disciplinary action against the users who got “#MassacreMitch” and “#AssassinateTrump” trending. In fact, Twitter let them trend. So making threats against Republicans is fine, but Republicans who report those threats must be censored, according to the logic of Twitter’s original decision to kick the McConnell campaign off the platform.

Twitter initially said that the McConnell campaign’s post calling public attention to a video of the threats being made against their candidate “violated our violent threats policy, specifically threats involving physical safety."

Yet incredibly, Twitter has taken no serious disciplinary action against the users who got “#MassacreMitch” and “#AssassinateTrump” trending. In fact, Twitter let them trend. So making threats against Republicans is fine, but Republicans who report those threats must be censored, according to the logic of Twitter’s original decision to kick the McConnell campaign off the platform.

Twitter has a clear double standard on suitable content for its platform. While it continues to restrict expression by Republicans and conservatives, it has no problem allowing the murderous terrorist group Hamas to maintain its account, spewing anti-Semitism and hatred of Israel.

Actor Peter Fonda was free on Twitter to fantasize about throwing Barron Trump, the president’s adolescent son, into a cage with pedophiles.

Twitter also didn’t mind when Rep. Joaquin Castro, D-Texas, recently posted a list of select people from his district who donated to President Trump’s campaign, accusing them in the post of “fueling a campaign of hate” against Hispanics. Those individuals have been subjected to vicious personal attacks as a result of Castro’s Twitter post.

It’s difficult to look at any of this and conclude – as Big Tech’s executives have repeatedly claimed in public statements, Capitol Hill hearings, and even during personal audiences with U.S. presidents – that they are completely politically neutral.

The notion becomes even more ridiculous when one considers the long record of the social media giants of censoring conservative voices, delisting and deplatfoming conservative media outlets, and even removing Republican campaign ads since President Trump was elected.

The McConnell campaign’s suspension was just the latest shot in a war that Big Tech has been waging against conservatives for years, which has been exposed through a massive trove of now-public internal communications among Silicon Valley executives and engineers.

There was the tear-filled, post-2016 election company-wide meeting at Google where executives promised to work to ensure that such a defeat wouldn’t happen again; an internal Google report extolling the virtues of censorship; a pile-on of Google employees calling the Conservative Political Action Committee a “circus platform of hate;” undercover video of Twitter engineers discussing their efforts to shut down a certain kind of “mindset” or “a way of talking,” and more.

Big Tech’s censorship and bias have gone well beyond the point of mere annoyance or inconvenience. The companies are now threatening to corrupt the very core of our political system.

If we continue to tolerate this abuse will only allow Silicon Valley’s tech giants to exert more and more power to influence our electoral process according to their own “progressive” beliefs.

By choosing to censor a candidate’s ads while allowing an opponent’s to stay up, or banning one candidate’s voice on social media and allowing another to go uninhibited, Twitter is potentially pushing the boundaries of federal election law by essentially making a massive in-kind contribution to one side – all unreported and untracked.

Democrats, who endorse incredibly broad definitions of in-kind donations when it comes to attacking President Trump, have mostly turned a blind eye to Big Tech’s election interference. That is a terrible mistake, because this is not a partisan issue, as Democratic presidential candidate Rep. Tulsi Gabbard of Hawaii can attest.

Gabbard, who was already sharply critical of Big Tech’s overreach, was recently forced to file a $50 million lawsuit against Google after the search giant suspended her ad account at a critical juncture of her campaign, right after a triumphant debate performance that made her the most-searched-for candidate of the night.

Google then allegedly compounded the damage by directing Gabbard’s campaign emails to the spam folders of her supporters with Gmail accounts.

It’s critical that all Americans urge our elected officials to use the tools at their disposal to prevent the tech monopolies from abusing their enormous power to affect election outcomes and substitute their elite judgments for the will of the people.

At the moment, Big Tech companies believe they have carte blanche for censorship under an extraordinarily broad reading of the term “otherwise objectionable” material in Section 230 of the Communications Decency Act, which they argue exempts them from any legal consequences for removing certain types of content.

The other categories of removable content are all narrowly defined, but the “otherwise objectionable” category is so broad and vague that it threatens to make tech companies into the ultimate censors of American political discourse.

This runs directly contrary to the spirit of the law that tech executives so frequently cite, which was, ironically enough, enacted to help “offer a forum for a true diversity of political discourse.”

Silicon Valley continues to lie to lawmakers and the public about political bias, and increasingly act as the invisible kingmakers of political campaigns. These companies need to be held to account under the law.

New legislation is in the works. In addition, President Trump is reportedly in the process of drafting an executive order to address Big Tech censorship.

Making clear that the words “otherwise objectionable” don’t extend to choosing which campaigns are allowed to speak to the American people, or applying arbitrary standards in a way that eviscerates informed consumer choice, would be a great place to start.