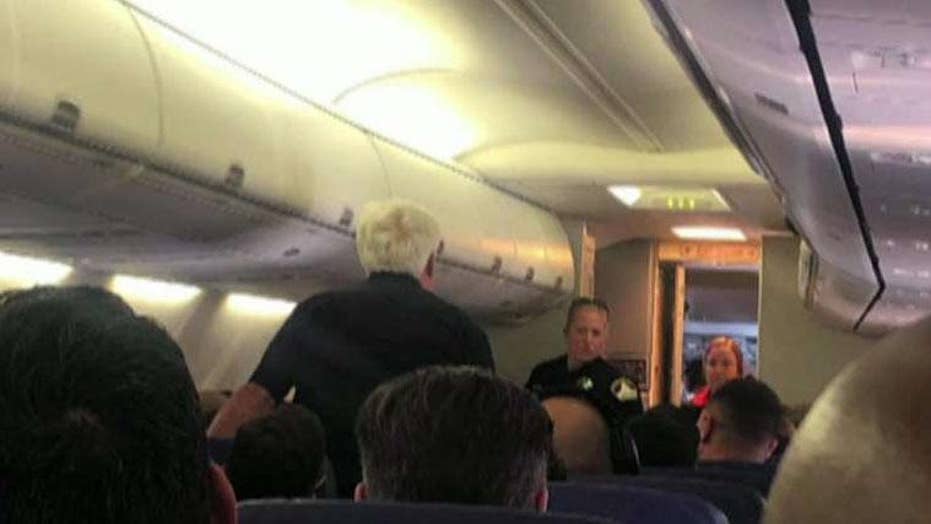 Gutfeld on jokes as aggression

Passenger kicked off Southwest flight after cracking a joke about vodka.

Did you hear the one about the passenger yanked from a Southwest Airlines flight for making a joke?

The flight from Sacramento to Austin, Texas had been delayed for hours – which spurred flight attendants to hand out water. One passenger asked if it was vodka.

The young flight attendant didn't find that funny, and despite fellow passengers defending the joker, the plane was turned back. Deputies boarded the plane and escorted the guy off.

At least he found a way to get off the plane on time.

Anyway, Southwest serves millions of passengers, so maybe this humorlessness is an exception for a company once known for its irreverence. But the incident is no longer out of the ordinary for life in general.

For so many people who came of age, but never grew up in the era of safe spaces, jokes are viewed as actual offenses, aggressions.

The result: we have a generation that fails to see that humor is one effective tool in reducing tension in stressful events – like a plane stuck on a runway.

If humans can no longer see humor’s value in reducing hostility, what are we left with? Hostility.

Life used to funny, truthful and shocking. Now it’s scolding and self-serious, with comedians as schoolmarms.

It’s the Seth Meyers effect: a jokeless life becomes mundane and pale. Even late at night. Yet he still has a show. Now that’s an unfunny punchline.