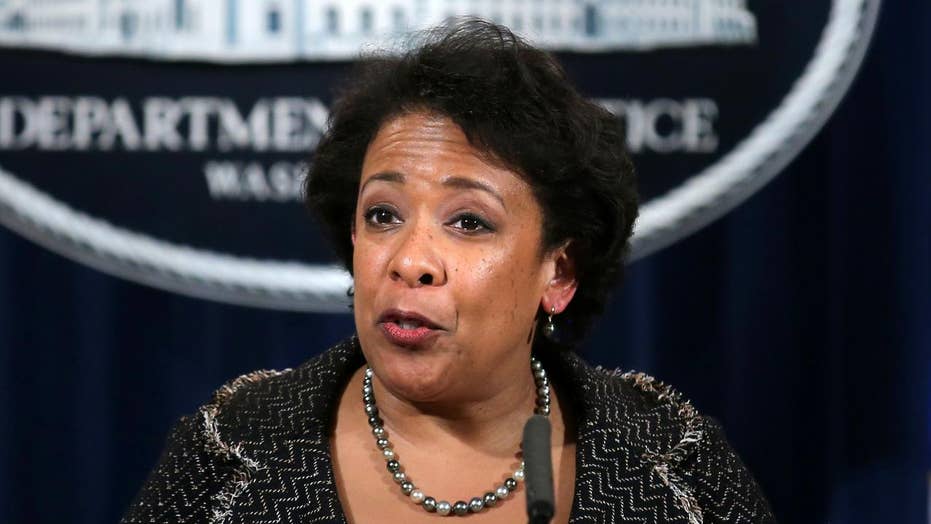 The former attorney general will testify as a part of the Russia investigation.

I don’t believe in coincidences. Not when it comes to crimes. Especially when they involve political corruption.

No such thing as a coincidence.  Doesn’t exist.

Yet, we are led to believe it was merely a coincidence that Bill Clinton just happened to be on the tarmac of an Arizona airport at the same time as then-Attorney General Loretta Lynch.  We are supposed to accept that their private meeting on board Lynch’s plane had nothing whatsoever to do with the criminal investigation of Hillary Clinton which the A-G was overseeing at the time.

Right.  They just “schmoozed” about grandkids and what-not.

I guess it was also just a coincidence that a few days after the furtive tarmac meeting the decision was announced that criminal charges against Clinton, the Democratic nominee for president, would not be filed, notwithstanding compelling evidence that she repeatedly violated the Espionage Act by storing highly classified documents on her private, unauthorized and unsecured email server in the basement of her home.

Sure. Makes perfect sense. To a naïve, gullible fool.

Maybe it was purely a coincidence that there was another FBI investigation going on involving Russia’s corruption-fueled purchase of U.S uranium assets and which also happened to implicate the Clintons, but was kept hidden from Congress and the American people by Lynch and her predecessor, Eric Holder. Hmm…

And perhaps it was simply an odd coincidence that the investigation of this uranium bribery, extortion, money laundering and kickback case was supervised by then-FBI Director Robert Mueller, his successor James Comey, and then-U.S Attorney Rod Rosenstein, all of whom appear to have covered it up but are now directly involved in the Trump-Russia probe.

I don’t buy any of it. Not for one minute. And not entirely because I don’t believe in coincidences. It is because all the above-mentioned people are known to trifle with the law or ignore disqualifying conflicts of interest. They seem to be without principles --devoid of the kind of scruples that should guide people in service of our government.

Mueller is serving as special counsel in the Trump-Russia case.  He reports to Deputy Attorney General Rod Rosenstein who appointed him.

Yet both Rosenstein and fired FBI Director James Comey are witnesses in the case, since Rosenstein recommended to President Trump that Comey be fired.

It is well established that Comey and Mueller are long-time friends, allies and former partners. How can Mueller be fair and impartial given these glaring conflicts of interest? He cannot. And he should recuse himself. Rosenstein should also step aside in overseeing the case. He cannot be prosecutor and witness simultaneously.

Their conflicts are compounded by recent reports that all three men were involved in the Russian uranium case which was kept hidden from Congress. How can Americans have confidence in the outcome of the Trump-Russia case if they engaged in a cover-up of the Clinton-Russia case?

Which brings us to Hillary and Bill. The Clinton name is synonymous with scandal. The sleazy Whitewater land deals, an illicit affair with a young White House intern that led to impeachment, deceptions following the Benghazi murders, Travelgate, cattle futures, suspected slush funds, evidence of perjury, the list is seemingly endless.

Through it all, the ability of the Clintons to evade indictments would make Houdini proud. They are escape artists of the highest order.

Loretta Lynch should never have presided over the Hillary Clinton email case. She owed her career to none other than Bill Clinton who nominated her to serve as U.S. Attorney for the Eastern District of New York which nicely positioned her for elevation to Attorney General a few years later.

She should have recused herself from the Hillary probe from the outset, but did not. Only when the ethically-challenged tarmac meeting took place did she step aside. Belatedly. Supposedly. I have my doubts.

On Friday, Lynch met behind closed doors with the House Intelligence Committee. Too bad the public was deprived of witnessing an attempt to elicit the truth. But secrecy is endemic in Washington, which is precisely why it is so easy to obscure the truth when power corrupts.

Lynch was likely asked to explain the full content of the infamous tarmac conversation with Bill Clinton that lasted approximately 30 minutes. Did Clinton remind Lynch of how much she owed him?  Are we to believe that he never broached the potential indictment of his wife with the very person who could decide her fate?

It is likely Lynch was asked by the Intel Committee if she ever directed Comey to mischaracterize the Clinton email case as a “matter” instead of what it truly was, a criminal investigation. Was Lynch downplaying the case because she planned to scuttle any criminal charges? Did she assure anyone in the Clinton orbit that prosecution would never happen, incriminating evidence be damned?

Finally, why did Lynch allow Comey to usurp the power of the Attorney General in announcing that no criminal charges would be forthcoming against Clinton? It was bad enough that Comey misinterpreted the law on “intent” and “gross negligence,” but Lynch appears to have allowed her office to acquiesce in Comey’s decision. Why?

Since Friday’s hearing was secretive, we may never learn the answers to serious questions that appear to involve lawlessness and rampant corruption.

Instead, we are left to wonder whether it was all just a confluence of fantastic coincidences.