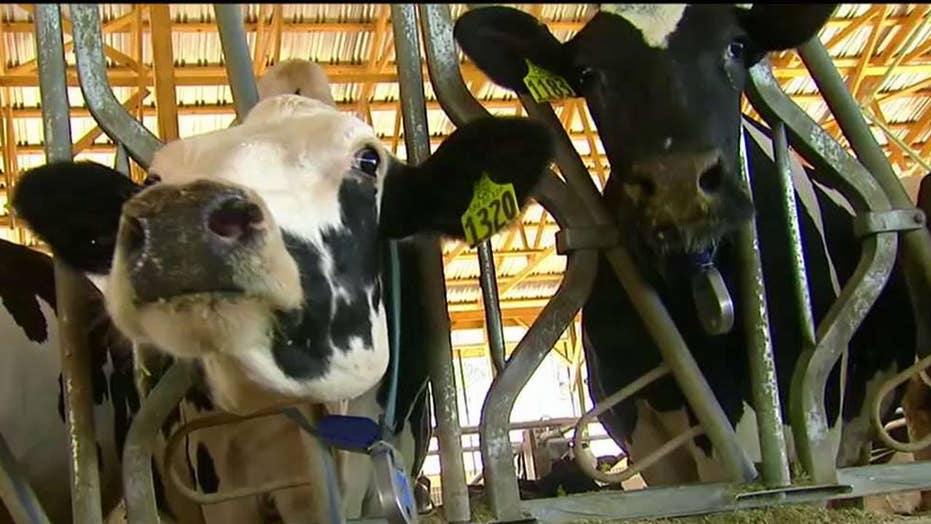 Democratic presidential hopefuls are beginning to visit Iowa seeking votes in the presidential nominating caucuses set for next February. But candidates who have endorsed the radical Green New Deal to dramatically restructure the U.S. economy by 2030 may be in for an unpleasant surprise.

The Green New Deal would do away with that industry – not only in Iowa, but everywhere else in the U.S.

Cow flatulence, you see, is a big source of global warming. So cattle have to go the way of the dinosaurs.

Assuming the wildly unrealistic Green New Deal actually became reality, forget about ever enjoying a burger, steak, roast, or other beef dish again. Perhaps we’d all start going to McDonald’s for sushi, tofu and a side order of kale. Just don’t ask for a carton of milk.

But the Green New Deal does not stop at destroying Iowa’s cattle industry. It goes after mechanized farming, too. The ability to grow crops in Iowa and make a profit doing so is completely dependent on the use of highly specialized and highly expensive machinery.

The average Iowa farm has $455,000 worth of farm machinery and equipment. The average cost of machinery for each crop acre is $135 and the investment per crop acre of machinery is $478. But those investments allow one person to work an average 437 crop acres and produce an average of $608 of value from each acre. In other words, mechanized farming is the lifeblood of successful crop production in the state.

The Green New Deal states that in just 10 years we would do away with the investment the farmers have in their expensive machinery. It would end the use of all fossil fuels, meaning current farm equipment would be useless and have to be scrapped.

Even farm trucks would have to be abandoned. While it is true that some vehicles and equipment might be replaced with electric-powered substitutes, those alternatives do not now exist, the infrastructure for them does not exist and the largest of the machines might be difficult to power with batteries.

You could use hydrogen fuel cells, but the natural gas production required to create affordable hydrogen would be abandoned under the Green New Deal.

On top of that, outlawing the use of gasoline and diesel fuel would devastate the ethanol industry. Ethanol is mixed with fossil fuels and accounts for $4.6 billion of Iowa’s gross domestic product, according to the Iowa Renewable Fuels Association. And the industry supports more than 43,000 Iowa jobs, including the jobs of farmers who grow corn that’s turned into ethanol.

Cars are not equipped to run on 100 percent ethanol – most run on fuel that is 10 or 15 percent ethanol now. So kiss the ethanol industry goodbye under the Green New Deal.

So far, at least six of the announced or possible Democratic presidential candidates have signed on to the aspirational resolution for climate change action. The known presidential aspirants and possible candidates who are New Green Deal supporters include Sens. Cory Booker of New Jersey, Kirsten Gillibrand of New York, Kamala Harris of California, Jeff Merkley of Oregon, Bernie Sanders of Vermont and Elizabeth Warren of Massachusetts.

What the Green New Deal supporters are aspiring to do is destroy the economy of Iowa and destroy the livelihood of hundreds of thousands of Iowans who depend on farming and the ethanol industry to make a living.

How many Iowa caucus-goers do you think will support that nightmare scenario? Democratic voters at the caucuses might wind up supporting Donald Trump for their party nomination. He might be their only alternative to unemployment and economic ruin.

Ocasio-Cortez proved that recently by helping to convince Amazon to cancel plans to open a second headquarters in New York City that could have provided 25,000 to 40,000 jobs with an average annual salary of over $150,000. Some of those jobs could have gone to her constituents in her New York City district.

A gleeful Ocasio-Cortez boasted that she had struck a blow against evil capitalist greed and for oppressed workers by killing the Amazon deal. She has a point – you can’t be an oppressed worker if you’re out of work. But her constituents deprived of high-paying jobs because of her actions might not be pleased with being liberated from big paychecks.

But hey, who needs a job? The Green New Deal calls for giving everyone a guaranteed income, including able-bodied people who simply don’t want to work.

How do we pay for this? By printing as much money as we need, advocates of the Green New Deal tell us. What could possibly go wrong with that?

Moreover, the Democratic candidates supporting the Green New Deal are jeopardizing the food supply for the whole county. What applies to Iowa, applies to farming throughout the United States.

Interestingly, one of the provisions of the Green New Deal says government will collaborate with farmers and ranchers to decarbonize the agricultural sector.  But once you have destroyed their herds and parked their machinery, what is there to collaborate about? How much free money to print for the day?

Instead of a mere aspirational resolution, the radical Democrats should be asked to write real legislation that would implement their ideas. Only then will we be able to evaluate more than their intent. Actual legislation could be evaluated for its costs and its impacts.

The real problem is that when ideologues and radicals run amok, all perspective and commonsense gets lost. We have a very complex country with a complex economy, a complex culture, a complex political structure, and, yes, even a complex climate.

It has been said that for every complex problem, there is a simple easy answer – and it’s wrong. Nothing could better describe the Green New Deal.

The Green New Deal is a seemingly simple answer to all the nation’s problems for many on the far left. Wrap our climate fears, our social maladies and our economic life into one radical package and you have an answer to all our woes. I’m sure this kind of nonsense would be accepted in some corners of the country, but I doubt it will sell in Iowa.