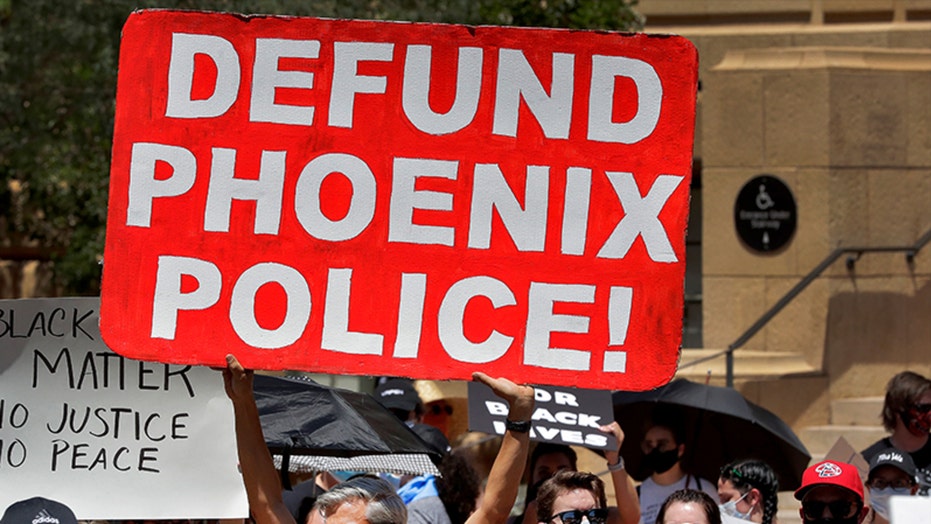 How anti-police sentiments could impact the 2020 election

The looting and riots that roared out of the George Floyd protests were surprising. The left’s celebration of this violence is shocking.

What follows are not the reckless rants of basement-dwelling, boxer-short-clad, baby Bolsheviks. Rather these are the words and actions of elected and appointed Democratic officials, top activists, and their comrades in the liberal establishment media.

These leading leftists encouraged, enabled and empowered people who decided to riot after they saw four Minneapolis cops go low as one officer knelt on Floyd’s neck for nearly nine minutes and killed him on Memorial Day, while the other cops did nothing to stop the killing. All four now-fired officers face charges of second-degree murder or aiding and abetting second-degree murder.

“A once in a lifetime opportunity,” is how Democratic Massachusetts Attorney General Maura Healey described the subsequent rioting. “Yes, America is burning, but that’s how forests grow.”

Rep. Maxine Waters, D-Calif., seemed unconcerned about store shelves being vacuumed by marauders nationwide. “Young people, they have a whole new definition for ‘looting,” Waters said. “They say ‘looting’ is predatory lending in, you know, minority neighborhoods, where they’re paying 300 and 400 percent on loans by these payday lenders.” So, the chairwoman of the House Financial Service Committee believes that the real villains are not retail thieves but those who finance black and Hispanic loan applicants.

“But what I don’t want to hear is for our constituents to be told to be civil, not to be reactionary, to be told looting doesn’t solve anything,” said Mosqueda’s socialist colleague Tammy Morales. “It does make me wonder why looting bothers people so much more than knowing that across the country, black people are being killed.”

“We don’t believe this is the time to be releasing a bomb-thrower like the defendant into the community,” said prosecutor Ian Richardson.

At least 13 Biden campaign employees donated to the Minnesota Freedom Fund, which paid cash bail for protesters and rioters arrested during the recent unpleasantness. Trump 2020’s Tim Murtaugh responded: “The city is burning & Biden staff are funding it.”

“Burn It All Down,” an Essence headline insisted. Yesha Callahan cited George Floyd, other unarmed blacks killed by cops, and the “insurmountable rate” of black COVID-19 fatalities. “Until these things disgust you, we riot, we protest and do whatever it takes to get your attention – including burning it all down.”

In The New York Times – the so-called “Paper of Record” – reporter Nikole Hannah-Jones argued that “destroying property, which can be replaced, is not violence.” Does that include this Pulitzer Prize winner’s windows? Her home?

“Please, show me where it says that protests are supposed to be polite and peaceful,” CNN’s Chris Cuomo demanded. Did Cuomo flunk high school civics? The First Amendment guarantees “the right of the people peaceably to assemble.”(Italics added).

“Riots are, at their core, a choice made by those in power, not people who participate in them,” The Atlantic’s Amanda Mull said via Twitter. “If you build a society that exhausts and abuses people and privilege [sic] capital over human life, I’m not sure which other imaginary ‘civil’ options you expect people to exercise.”

•“Burn that s--- down. Burn it all down,” ESPN alumnus and NBA analyst Chris Palmer cheered via Twitter on May 29, above a photo of 189 affordable-housing units that were under construction until Minneapolis rioters incinerated them.

But rather than a revolutionary, Palmer echoed landed gentry when rioters reached his California home.

“They just attacked our sister community down the street,” Palmer ranted via Twitter on May 31. “It’s a gated community and they tried to climb the gates. They had to beat them back. Then destroyed a Starbucks and are now in front of my building. Get these animals TF out of my neighborhood. Go back to where you live.”

After learning that walls work and expressing the Palmer Principle (trespassers should “go back to where you live”), Palmer wagged his finger at his visitors, saying: “Tear up your owns---. Don’t come to where we live at and tear our neighborhood up. We care about our community. If you don’t care about yours I don’t give a  s---.”

On June 1, BuzzFeed’s Ajani Bazile published “19 Tips For Anyone Who Plans On Protesting.” “Bring enough cash for food, transportation, or other necessities,” Bazile recommended. “Bring snacks and water to keep your energy up.”

But King and Gandhi might wonder why peaceful demonstrators, as Bazile suggests, would “Wear clothing that covers tattoos, discernible scars, and birth marks that could be used to identify you.” Suspiciously, he also counseled: “If you are worried about the possibility of being tracked by law enforcement, don’t post on social media while you’re there, turn off Face/Touch ID on your phone, or bring a burner phone.”

These comments leave these leftists in a moral landfill. More dangerous: how some respond.

“When you tell people their violence is righteous, you engage in what is called moral licensing,” National Review’s Zaid Jilani observed. “People start to think, not only does what I’m doing feel good, but it is even improving the world around me – even as it demonstrably does the opposite.”

On Election Day, remember all of this and vote as if your life, liberty and property were at stake.