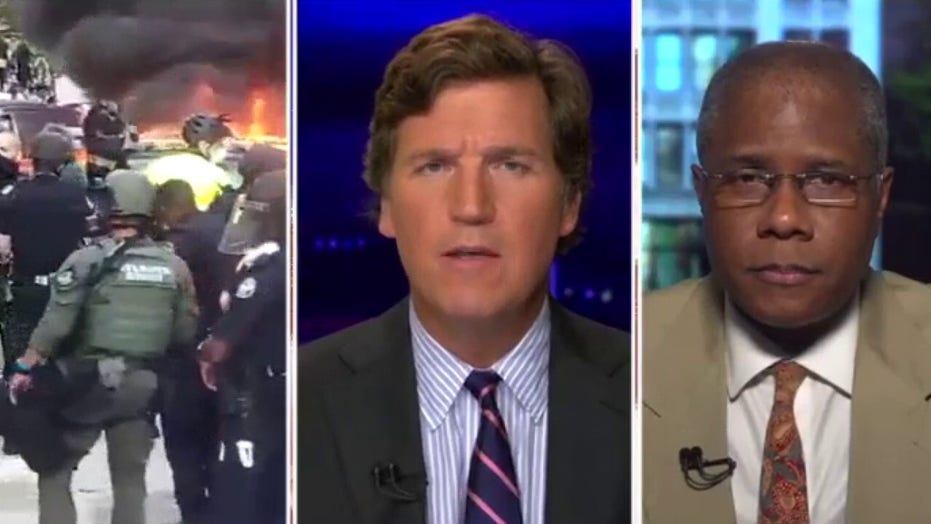 Deroy Murdock: American Dreams are being burned down by rioters in Minneapolis

In the name of George Floyd, Minneapolis rioters have done a huge injustice to George Floyd.

Floyd, 46, is dead. A widely viewed video confirms that the unarmed black man was killed after white police officer Derek Chauvin, 44, arrested him for allegedly passing a counterfeit $20 bill, handcuffed him, pinned him to the asphalt, and then planted his knee on Floyd’s neck.

“His nose is bleeding,” one horrified onlooker said off-camera. “How long y’all gotta hold him down?”

This did not continue for a few moments or just long enough to stop Floyd from resisting arrest, which – being cuffed – he didn’t do anyway. Instead, this dragged on for eight minutes.

“I can’t breathe,” Floyd implored. “Don’t kill me.” Chauvin did not relent. Floyd’s plea became a premonition: He died.

Unless something astonishing is hidden on that recording, this is a museum-grade specimen of overreaction, excessive force and police brutality.

Citizens rightly assembled, expressed their outrage, and called for the arrests of Chauvin and the three cops/spectators who let this happen. (Chauvin was arrested Friday afternoon and charged with third-degree murder and manslaughter).

But then things went too far. The protests – as CNN called them, even after violence erupted – soon became riots.

Locals attacked an elderly lady in a wheelchair and sprayed her with a fire extinguisher. That’s not activism. That’s bedlam.

When those who derided Floyd’s killing smashed police car windows and lobbed bottles at cops, the rioters began their slide off the moral high ground.

The ski jump off the moral high ground began when Minnesotans turned this into a 100 percent-off shopping spree.

Whatever sympathy people may have felt for Black Lives Matter or greater police accountability collapsed when hoodlums looted HDTVs, sneakers and other merchandise. Stunning images of thieves hammering open cash registers at a picked-clean Target store did not engender empathy for George Floyd or justice for his survivors.

Arsonists turned Auto Zone, Minnehaha Lake Wine and Spirits, and at least 14 other structures into cinders. How many disproportionately black locals now will lose their jobs because these establishments have been torched? Those whose jobs survived the COVID-19 lockdown now likely will join 40 million other Americans on unemployment.

The membrane between civilization and savagery is about a millimeter thick. In the Twin Cities, it dissolved like a communion wafer.

Minneapolis police officers deserted Third Precinct headquarters, which rioters breached, a la America’s Tehran embassy in 1979 or the Bastille in 1789. The flames that leapt from the abandoned police building gave proof of the total anarchy that officials permitted, to let rioters “blow off steam.”

The membrane between civilization and savagery is about a millimeter thick. In the Twin Cities, it dissolved like a communion wafer.

Korboi Balla, a black firefighter, plowed his life savings into a sports bar, which he expected to launch on Monday. Grand opening canceled. Arsonists had other plans for his watering hole.

Even worse, Balla had no insurance. So, his life is a smoldering ruin. Nice work, thugs!

As Balla explained all of this to a TV crew, looters tiptoed through the embers of his American Dream, as they tried to swipe his safe in broad daylight.

“Waking up this morning to see Minneapolis on fire would be something that would devastate Floyd,” his girlfriend, Courtney Ross, told the Star Tribune newspaper.

None of this will encourage police officers to behave better. If anything, it will arch their backs.

The rioters body-slammed the spotlight from the torture and killing of George Floyd to the narcissistic, nihilistic destruction of their own city. These barbarians resemble Palestinians who demolish their surroundings, such that they reduce any legitimate grievances into rubble.

Leftists predictably blame President Trump. Regardless, he called this “a very shocking sight” and correctly ordered the Justice Department and FBI to “take a very strong look” at what happened.

Trump’s enemies are never satisfied. If he dispatched federal agents to hunt Floyd’s killers and blast them with revolvers, Hate Trump, Inc. would scream, “Why not Glocks? Why not machine guns?”

President Trump said Friday that he has contacted Floyd's loved ones family and expressed his condolences and those of the nation.

“I spoke to members of the family, terrific people,” Trump said. “I understand the hurt, I understand the pain. People have really been through a lot. The family of George is entitled to justice and the people of Minnesota are entitled to live in safety.”

The president said he supported peaceful protests but “we can’t allow a situation like happened in Minneapolis to descend further into lawless anarchy and chaos.”

Trump now should bring burned-out merchants to the White House and ask them to urge people to stop the mayhem that has converted a worthy cause into total chaos.