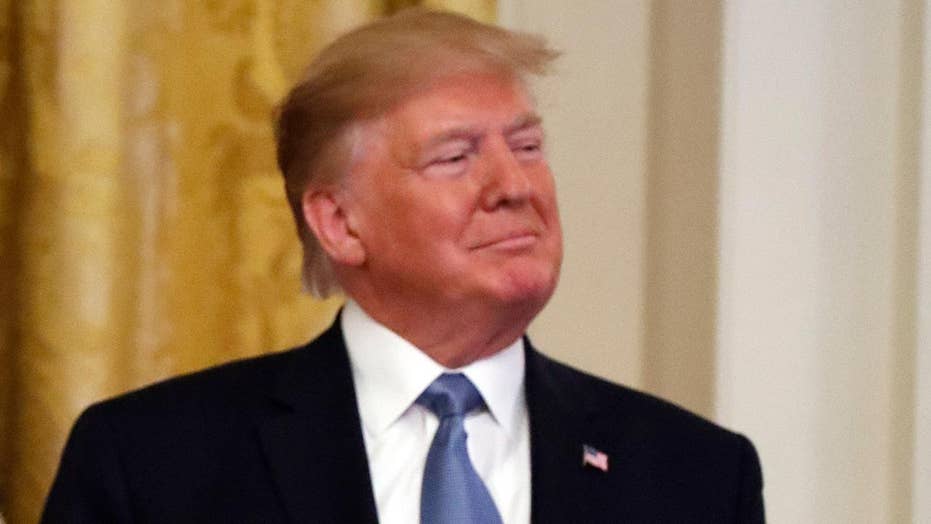 President Trump’s biggest challenge for reelection may not be the eventual Democratic nominee – it’s an economy with record expansion that is starting to slow.

Today, signs are pointing to another economic slowdown. The auto industry is facing flat sales, with Americans buying roughly the same number of cars this past June as they did in June 2018. Some of this may be due to the president's actual and threatened tariffs on cars and steel, which have not helped sluggish sales. Americans are also increasingly delinquent on their auto payments, a potential early sign of an economy in distress as total debt continues to rise.

The stock market is volatile, and nearly half of United States chief financial officers predict a recession in the first half of 2020. The Trump administration’s 25 percent tariffs imposed on Chinese imports, the threat of tariffs on Mexican imports, new tariff threats on Vietnam and fights with our allies have U.S. business leaders concerned. Our own government is prompting expensive supply chain shifts, while businesses waste time on crisis management, contingency planning and lawyers.

In addition, the president continues to assail our world-leading Internet businesses instead of treasuring and treating them as America’s crown jewels. Time and resources used to fend off attacks from our own government mean less time for innovating, building value and creating U.S. jobs.

Many business leaders are afraid to express concerns about this volatility, as they fear retaliation directly and indirectly by the president. The example of the former British ambassador to the U.S. – publicly demeaned by the president for doing what his job demanded and, ultimately, resigning his post – was not lost on anyone. It’s true that several Trump administration policies, such as reforming tax law and loosening oppressive rules, have spurred huge economic growth, stock market gains and business success.

Presidents often claim credit – or deflect blame – for economic swings. But there is no question the Trump administration deserves credit for the last two years of strong growth. For example, in his eight years as president, Barack Obama earned credit for modest growth, fueled mostly by the U.S. becoming a leader in oil production through fracking and natural gas exports.

But just as Trump deserves credit for the strong economic growth, he may also be blamed for the next recession, given his volatility on tariffs and unconventional global relationships. The “Trump Recession” may be part of the natural business cycle, but threats of tariffs and volatility in global trade relationships will certainly be contributing factors.

Given Trump’s intense focus on the Federal Reserve, he must realize that, to paraphrase candidate Bill Clinton’s campaign, “It’s the economy, stupid.” One of the last remaining tricks to pump up the economy is a drop in interest rates, which Trump clearly wants to happen before the next election. Lowering the cost of debt will not only prop up the economy in the short term, but as global interest rates fall, the cost of servicing the $22 trillion debt will fall slightly.

Another strategy Trump could deploy, which is advocated for by Americans for Tax Reform head Grover Norquist, is unlocking cash in the market and freeing up the income of asset-holding Americans by indexing capital gains to inflation

In other words, no gain would be taxed for long-held stocks, land or assets unless the gain from purchase exceeds the inflation rate during the holding period. Norquist makes a compelling argument for this plan, noting the Department of the Treasury has the regulatory authority to add an inflation adjustment to the calculation of capital gains taxes. Also, this strategy doesn’t require a vote by Congress or a Congressional Budget Office score.

If the president took Norquist’s recommended action, already supported within the administration, the stockholders would likely act quickly as they would be uncertain about whether a Democratic president would undo this action. This would have a strong, positive – and immediate – impact on the economy, benefiting millions of Americans with money in assets. The market would see huge transactions, Americans would receive investable or spendable income and the economy would have an infusion of unlocked cash.

The president has an opportunity to boost the economy. If he kills the tariffs, gets his Federal Reserve choices and indexes asset-taxable gains to inflation, he can spur economic growth through 2020. Otherwise, he will deal with a slowing economy and an increasingly concerned electorate.