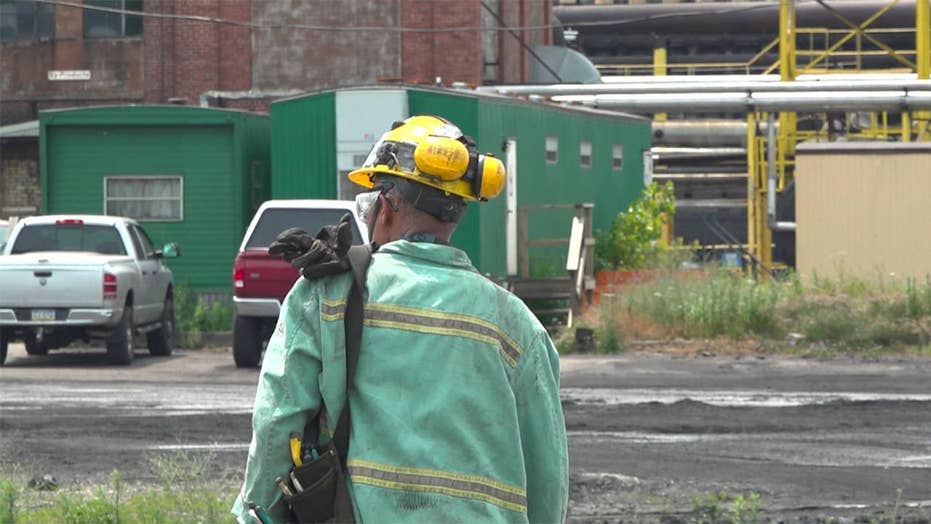 ERIE, Pa. – Donald Trump is counting on support in the Rust Belt.

President Trump's 2016 victory was secured by winning three Rust Belt states Democrats had carried in previous elections: Wisconsin, Michigan and Pennsylvania. Now, his 2020 re-election could depend on whether he can hold onto them.

"I always voted Democrat," said Larry Nelson, a steelworker at Erie Coke in Pennsylvania who voted for President Donald Trump in the last election. "But with this last election, I felt like he [Donald Trump] was trying to put the country on the right track."

Many of Nelson's co-workers at Erie Coke and his neighbors also voted for Trump in the 2016 election. For many, a vote in favor of Trump was fueled by financial frustrations.

Erie, located in northwestern Pennsylvania, had been largely plagued by industrial decline. So when then-candidate Trump vowed he would place the worker first and focus on trade deals and policies to boost the steel industry-- the historically blue county flipped red.

But now, many of those voters are once again feeling frustrated. They say the area has not rebounded as much as they had hoped and that promises that were made were largely not kept.

According to a recent poll conducted by Mercyhurst Center for Applied Politics, 35 percent of voters in Erie County, a county that helped Trump win, approve of the president's job performance.

In Pennsylvania, where the race was excruciatingly close, tiny shifts in any part of the electorate could change the outcome next year.

A different type of battle

Kristen Coopie, a political science professor and director of undergraduate pre-law studies at Duquesne University, said the upcoming 2020 election will be a different type of battle for candidates.

“In 2016, we saw the same story emerge from the election -- people were apathetic towards both candidates,” Coopie said. “Voter turnout was low and of the people who did show up, they voted for Trump either willingly or in preference over Hilary Clinton.”

Today, voters in Erie have had three years to compare. Some feel not enough has been done to lift its economy. Many in the region are particularly worried about the potential closure of Erie Coke, one of the last steel plants in the area.

"In 2016, Trump connected with union workers," Coopie said, "but with the closure of Erie Coke, we could see that support waiver and the overall morale of the worker shrink.”

The plant, which produces coke, a key ingredient in making steel, is battling with the state’s environmental board over alleged violations. If the company closes, nearly 200 workers could lose their jobs, Nelson said.

“I blame state regulators, not the federal government,” said Nelson, who stands behind his decision to vote for Trump. “We have to look at the bottom line -- the nation is doing better [under President Trump].”

But for residents like Sean Fedorko, who is from the area and returned to start his own company, Radius CoWork, after college, the president is to blame.

He said rather than promise jobs to people in dying industries, the president should focus on promoting innovative businesses with a strong future.

“I’m happy to trade off some really dangerous, potentially harmful jobs today, which are not in high demand, to gain more high value, productive, and efficient jobs,” Fedorko said.

He said if an employer like Erie Coke cannot meet environmental regulations, then good riddance.

“The closing of the plant is inevitable, really, if it is no longer able to produce its product in an eco-healthy way," Fedorko said. "So why give workers false hope?”

Right now, Erie Insurance is now the largest employer in Erie County and is expanding; Mercyhurst University breathed life into the Innovation District that now resides within the new Velocity Network headquarters in downtown Erie; and the region's four universities are collaborating in what's called the Innovation Beehive Network to support startup entrepreneurship throughout Erie County.

Fedorko represents a part of the “new” Erie. An independent voter who is swayed by candidates who emphasize bipartisan collaboration and whose policies address the circumstances of his community.

“I am not impressed by promises,” said Fedorko, who expressed he doesn’t think he’d vote for Trump, Sen. Bernie Sanders, or former Vice President Joe Biden.

“I am looking for a candidate with plans like Sens. [Elizabeth] Warren and [Kamala] Harris," he said, "whose plans address my generation and the future.”

For Trump to be successful, experts believe he will need to ensure voters attribute the current economic boost to his strategies and policies. In March 2019, unemployment rates in Erie dropped to 4.3 percent, down from 6.2 percent in December 2016. But the region lagged far behind the national average of 3.7 percent, according to the Bureau of Labor and Statistics.

A challenge for President Trump, Coopie said, is making sure residents in the Rust Belt credit the strong economy to him. Voters in the region will either still feel left behind or feel their economic situation has improved under Trump.

“Right now voters in this region are going to support a candidate," Coopie said, "who is ultimately going to make their situation better."