From the moment he was sworn in as attorney general, Merrick Garland set out to transform the Department of Justice into a zealous political organ. Without conscience, he weaponized his immense powers to protect President Biden while punishing his adversaries. Garland’s appointment of a special counsel to take over the DOJ’s investigations of Donald Trump offers further proof.

U.S. government regulations specify that a special counsel will be named whenever there exists a conflict of interest or even the appearance of one. Garland cited Trump’s announcement that he is again running for president in 2024 and Biden’s stated intention to do the same. The impropriety of an incumbent candidate’s administration investigating his opponent is self-evident.

Yet, the attorney general continues to ignore an even greater conflict of interest as he presides over an FBI and U.S. attorney investigation of Hunter Biden that directly implicates his father, the president.

How convenient and dishonest. It bears the unmistakable stench of a double standard.

The probe has gone nowhere during Biden’s presidency, and no charges have been filed.  More than a dozen FBI whistleblowers have stepped forward to expose the political bias that has deeply infected the investigations that were effectively shut down.

The evidence contained on the infamous laptop alone constitutes a compelling case of influence peddling, fraud, bribery, tax evasion, and violations of the Foreign Corrupt Practices Act, as well as the Foreign Agents Registration Act. Tens of millions of dollars flowed into Biden bank accounts from foreign interests and governments who appear to have paid enormous sums of money for access to Joe Biden and promises of influence. Entities in China, Russia, Ukraine, Kazakhstan, Romania, and several other countries poured money into Biden coffers with Hunter’s father as an expected beneficiary. Allegedly $40 million came from Russia, some $30 million from China, and roughly $11 million from Ukraine. 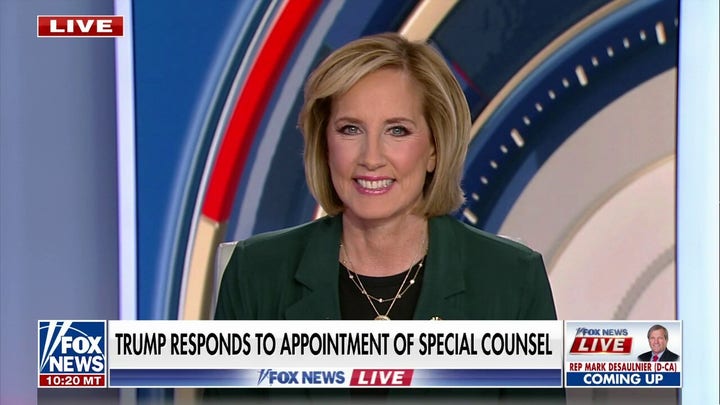 Volumes of documents and the damning statements of one of Hunter’s primary business partners incriminate President Biden as complicit in his son’s lucrative schemes. It is ludicrous for Joe to claim he knew nothing about the nefarious dealings and never spoke with Hunter about it. Photographs and emails directly contradict this. And so do visitor records showing that the elder Biden met repeatedly with his son’s partners during the Obama administration. One of them logged 19 separate visits to the White House.

It is the definition of a conflict of interest for the attorney general to oversee a criminal investigation of his boss and his son. Americans have little reason to trust that Garland will disassociate himself from any decision to prosecute. He has personal motivation —his own job security— to cover up wrongdoing and obstruct criminal culpability. It is no coincidence that Garland’s special counsel announcement involving Trump came just one day after Republicans in the House of Representatives vowed to launch hearings into the illicit money-making ventures.

Come January, the newly installed House Oversight Committee will likely issue subpoenas to the Treasury Department to produce the more than 150 Suspicious Activity Reports (SARs) evidencing millions of dollars in overseas cash that was transferred into Biden-related accounts. U.S. banks flagged a staggering number of these transactions and notified the financial crimes unit at Treasury. But Joe Biden reversed long-standing policy by refusing to produce the documents voluntarily to members of congress. Will Garland enforce these subpoenas as vigorously as he enforced the January 6th committee’s subpoenas? Doubtful. He’s been running a protection racket for the Bidens, and there are no signs that it will stop. His appointment of former DOJ prosecutor Jack Smith as special counsel to investigate Trump shrewdly shifts the media’s focus.

There is reason to be suspicious that Smith will be the impartial special counsel that federal regulations demand. The last one selected to investigate Trump, Robert Mueller, assembled a team of partisans. So, we’ve seen this act before. Smith’s promise to proceed swiftly suggests that he may rely on many of Garland’s existing prosecutors who have demonstrated that they are neither neutral nor fair. His prior employment at the Justice Department in the Obama administration raises legitimate questions about his objectivity in a politically charged case. Mueller lieutenant, Andrew Weissmann, endorsed the appointment of Smith, which should tell you all you need to know about his predisposition.

In raiding Trump’s Mar-a-Lago residence to recover documents, Garland criminalized a dispute with the National Archives over material governed exclusively by the provisions of the Presidential Records Act, which is a civil statute that contains no criminal remedy. The Act affords a former president extraordinary discretion to access and control presidential material. Hence, the proper recourse was for Garland to file a motion in court to compel enforcement of his subpoena seeking documents that may or may not be classified and/or privileged. Instead, he chose to ignore the language of the Act and descend upon Trump’s home with a phalanx of armed FBI agents under the guise of criminal statutes that have little relevance. He snookered a magistrate into signing an overly broad general search warrant that is strictly prohibited by the Fourth Amendment. Personal effects without evidentiary value were seized, along with the disputed documents.

In court filings, Trump’s legal team cited a 2012 dispute over records that Bill Clinton took with him when he departed office, including tapes that were arguably classified. No one raided Clinton’s home. The matter was litigated in civil court. A federal district judge in New York ruled that custody of the records rests squarely in the hands of a former president. District Judge Amy Berman Jackson stated that "the National Archives does not have the authority to designate materials as ‘presidential records.’ It lacks any right, duty, or means to seize control of them." The court concluded that a former president has sole responsibility to categorize a record as personal or presidential.

In her ruling, the judge adopted the very argument made in court by the DOJ that Clinton was entitled to keep whatever he wanted. Fast-forward 10 years and Garland is arguing against his department’s own interpretation of the law. Why? Because it is Trump, not Clinton. Garland’s flagrant abuse of power is partisan politics at its worst. It has contaminated the attorney general’s tenure from the outset.

The same is true of Garland’s decision to direct the new special counsel to investigate whether Trump "unlawfully interfered with the transfer of power" after the 2020 election or with the Electoral College vote count. Despite the best efforts of the one-sided January 6th committee, no credible evidence has emerged that Trump committed any crimes. Indeed, no criminal referral has been made by the committee. It should be remembered that Democrats employed the exact same tactics of contesting electors in the 2016 presidential contest when Trump was the winner.

The pursuit of Trump by Garland is about politics, not national security. The latter is simply a convenient pretext. The true intent is to bludgeon Trump with the cudgel of investigations and threatened prosecutions. At the same time, Garland turns a blind eye to the mountain of evidence that Joe and Hunter Biden fattened family bank accounts by selling out America and jeopardizing its national security in the process.

Merrick Garland presides over a Department of Injustice that manipulates the law for political gain. It smacks of retribution against Republicans for denying him a seat on the U.S. Supreme Court. At least Americans can be thankful for that.