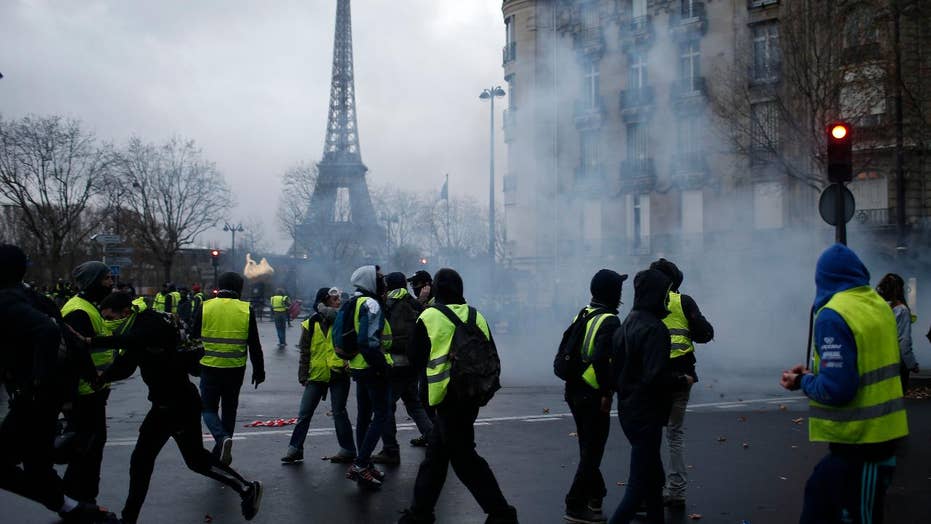 Over 700 arrests have been made in France amid the violent protests due to rising fuel taxes; Greg Palkot reports.

A city on fire. Cars burnt to ashes. A national monument defaced. 10,000 tear gas canisters and stun grenades used against protestors. In one week, Paris transformed from the City of Lights into a total battle zone.

It’s important to understand how we got here. A major European power was brought to its knees by a mass protest – a near revolt by its people. Even for France, these events don’t happen often. It takes major problems to cause this level of upheaval, and we should seek to understand why people would risk their lives and take to the streets.

The proximate cause of what’s being coined the “Yellow Vest” protests may shock you: climate taxes.

French President Emanuel Macron has fully bought into the elite, environmentalist position that governments must do everything, including implementing regressive taxes on the most disadvantaged, to restrict so-called dirty transportation like driving. That’s why Macron championed an “eco-tax” that would raise fuel prices in order to discourage driving. Diesel fuel was set to rise by 24 cents a gallon and gasoline by 12 cents a gallon in January.

That may not seem like a lot, but the French are already paying exorbitant fuel prices, roughly $6.57 per gallon in U.S. dollars. You can see why the French people would say enough is enough.

The French people, especially rural citizens who have no choice but to drive for their livelihoods, were predictably furious. Discontent with Macron had been growing for other reasons both cultural and economic, but these environmentalist gas taxes were the straw that broke the camel’s back.

One French citizen expressed his frustration by explaining to the Washington Post, “We live on the side of a mountain. There’s no bus or train to take us anywhere. We have to have a car.”

Protestors flooded Paris, sporting yellow vests that all French motorists are required to have, causing the worst violence the city has seen since 1968. Protestors even went so far as to deface the Arc de Triomphe, scrawling “Marcon resign” in graffiti on the monument. Macron has since relented, at least temporally, by putting the planned carbon tax hikes hold.

The violence in France makes clear how regular families feel when they are the brunt of elitist, technocratic environmental policy that threatens their ability to pay their bills and provide for their children. It’s no wonder they feel devalued when they’re told to fork over even more money. It’s no wonder they recoil when the Paris elite, accustomed to taking Ubers and subsidized mass transit, shame their car-centered lifestyle and don’t seem to care about their struggles.

The reaction from climate activists in America to these events has been a suspicious silence.

They don’t want to talk about the protests in France because it calls into question their entire political and policy platform. After all, left-wing climate groups in America like the Sierra Club and the Sunrise Movement, as well as far-left politicians like Tom Steyer, Michael Bloomberg and Alexandria Ocasio-Cortez, want to bring French-style carbon taxes to America.

Steyer and Bloomberg especially signify the elitist nature of modern environmental activism. From their enclaves in San Francisco and New York, they dictate to the people down below how to live their lives, even as they buy up mansions and live the good life of the extravagantly wealthy, boasting their own massive carbon footprints in the process.

This is not theoretical. Just last month, members of Congress rolled out another federal plan to tax carbon, and Ocasio-Cortez has made passing a radical “Green New Deal” (code-word for a massive carbon tax) her top priority after she is sworn in.

The protests in France should be a lesson for green activists here in America – people simply do not want these radical taxes forced on them.

Will the green movement listen and drop their demands for carbon taxes? Unfortunately, that’s doubtful.