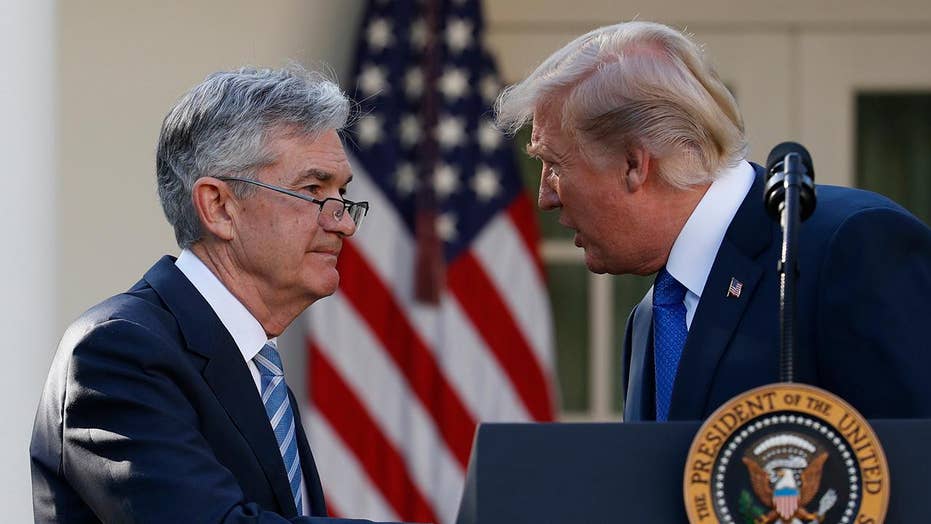 President urges the Senate to swiftly confirm Powell to replace Janet Yellen when her term ends in February.

By nominating Jerome Powell as chairman of the Federal Reserve, President Trump is elevating a nominal Republican but also an Obama administration appointee to the chairmanship of our nation’s central bank. Many consider the chairmanship to be the second-most powerful position in the U.S. government.

This is not the first time something similar has happened. In 2006 President George W. Bush appointed Ben Bernanke, also a nominal Republican at the time, who on leaving the Federal Reserve registered as a Democrat.

No wonder that Democratic Sens. Chuck Schumer of New York and John Kerry of Massachusetts publicly rejoiced when Bernanke was appointed. They correctly surmised that he was closer to them philosophically than to President Bush.

Democrats should be equally pleased about the Powell nomination. This puts someone in charge of the Federal Reserve who is more aligned philosophically with Schumer than with President Trump.

Ironically, it was mistaken judgments by Bush appointee Bernanke that brought on the Crash of 2008, which then ruined the economic record of the Bush presidency. Bernanke helped blow up the housing bubble with loose monetary policy and as late as 2007 refused to acknowledge any threats from the mortgage sector.

The trigger for the Crash was the chairman’s stubborn refusal to reconsider the imposition of “mark to market” accounting on U.S. banks. This form of accounting reflects the current market value of assets and liabilities. Steve Forbes accurately identified “mark to market” regulations as “mark to make believe.” They were guaranteed to make the entire banking system insolvent.

When Bernanke finally relented and announced the termination of “mark to market” the stock market bottomed only a few days later and thereafter soared as more easy money was poured in. These policies, cheered on by the Democrats, represented true trickle-down economics. They helped those already rich, not the poor or the middle class.

During the Crash, Bernanke devised a novel monetary policy that was remarkably unsupported either by economic evidence or theory. Federal Reserve economists acknowledged that they could not model it. The stated purpose was to protect Main Street, although it was obvious that Wall Street and not Main Street was being bailed out. What was not so obvious was that the real intention was to rescue a tottering federal government debt system.

It is illegal for the federal government to sell its debt directly to the Federal Reserve. This prohibition has been circumvented by the device of first selling the debt to Wall Street, which then resells it to the Federal Reserve. The latter buys the debt with newly created money, so in effect the government has simply created new money and used it to finance itself.

The system is so complicated that few people, even in Congress, understand how it works. Bernanke feared that the federal government would have too few buyers for its debt if Wall Street firms went under, so he moved to save them and at the same time guarantee a steady supply of buyers of U.S. Treasury debt.

Some of Bernanke’s steps in 2009, in particular the buying of mortgages, violated the plain language of the Federal Reserve Act, but Congress obliged with legislative fixes after the fact. Bernanke was also trying to reassure foreign central banks, which were also buying U.S. bonds from Wall Street. Toward this end, many of the direct bank bailouts by the Federal Reserve went to foreign banks.

Current Federal Reserve Chairwoman Janet Yellen was a close ally and acolyte of Bernanke. She continued and protected the system that he had built, in particular by refusing to sell government and government-guaranteed bonds purchased during the Crash, even after the economy was gaining ground. This was further evidence that the Federal Reserve’s actions had not been about the economy, but rather about shoring up the shaky government debt market.

Jerome Powell joined the Federal Reserve in 2012. Before that, he was a Wall Streeter even when based in Washington, and a prominent environmentalist. In his early career he was a protégé of Treasury Secretary Nicholas Brady, who served under Presidents Reagan and George H.W. Bush.

Brady persuaded the first President Bush to make a deal with Democrats to raise taxes, despite the president’s “read my lips” pledge not to do so. This bad advice is generally thought to have led to President Bush’s loss in his re-election bid.

On the Federal Reserve, Powell has been a “good soldier.” He never voted against the wishes of either Bernanke or Yellen. He vigorously opposed legislation proposed by Rep. Ron Paul, R-Texas, and his son, Sen. Rand Paul, R-Ky., to audit the Federal Reserve.

The Paul legislation would have penetrated some of the secrecy of the Federal Reserve, which finances itself “off-budget” with newly created money, notwithstanding the Constitution’s requirement that government spending be approved by Congress.

Powell can be relied on to oppose any reform of the Federal Reserve or any reconsideration of the Bernanke system, despite the dismal record of the U.S. economy since the Crash.  Powell was reportedly favored by current Treasury Secretary Steve Mnuchin, who earlier worked for Goldman Sachs and liberal financier and donor George Soros.

Mnuchin made campaign contributions to President Obama, Hillary Clinton and even Kamala Harris, who is now a Democratic senator from California.  He is widely perceived to represent the interests of Wall Street and of those with Democratic leanings in the Trump administration.