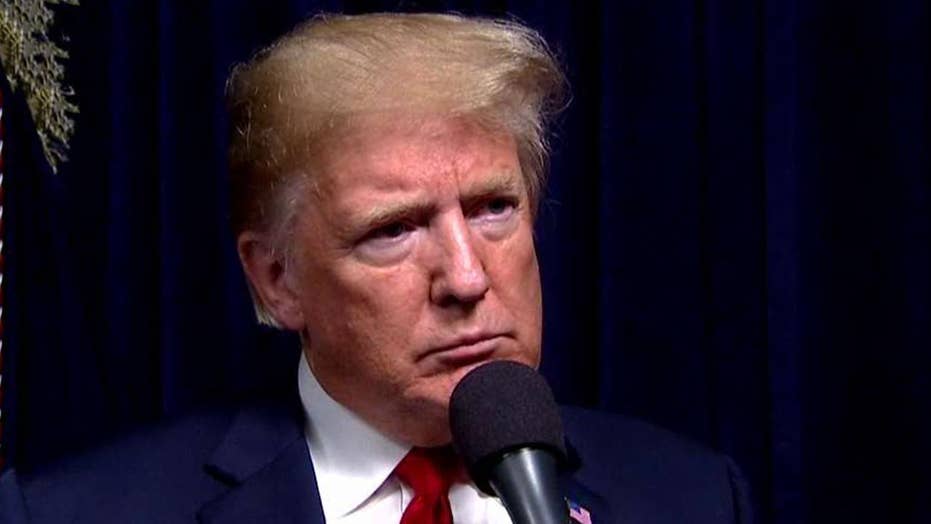 President Trump says Democrats are fighting to make sure that the border wall is not built and immigration laws are not changed, praises Republican Senate hopefuls Martha McSally and Rick Scott, says there's an electricity in the air that reminds him of 2016.

It’s Election Day and it’s hard to remember a midterm where the stakes have been higher.

The ads have run. The policies have been put forward. The candidates have made their cases to the American people. Now it’s time to vote.

President Trump made the decision to treat 2018 like a presidential election year. He crisscrossed the country to make his final argument to the voters on behalf of Republican candidates. He presented compelling facts and accomplishments to show voters why it’s in their best interests to vote for Republicans and keep both houses of Congress in GOP hands.

In 2016, Trump campaigned for president as the ultimate political outsider who would come to Washington with fresh ideas and a new way of conducting the nation’s business.

This president has defied all expectations by outworking, outsmarting and outmaneuvering the failed liberal leadership in the Democratic Party.

No one gave him a chance. The establishment scoffed at him at every turn. The New York Times and Washington Post were helping Hillary Clinton measure the drapes at the White House. In the face of all that, Trump decided to do even more campaign rallies and overcome all odds to win.

Since Election Day on Nov. 8, 2016, the American left has made it clear that they hate this president more than they love our country, resisting and tarnishing him at every turn. The mainstream media, liberal academia, and the socialists in the Democratic Party launched a coordinated effort to try to end this presidency before it began. They failed miserably.

To the new president trying to drain the Washington swamp, everything was on the table because Washington needed a lot of reforming and the swamp creatures fight back.

The left didn’t like what President Trump was planning to do to their failed status quo so they resorted to mob tactics. It didn’t work; because when it gets hot in the kitchen, Donald Trump is at his best.

This president decided to get to work and do it his way. And by any metric, he’s succeeded – and he’s just getting started.

The president promised to get our economy growing again. He’s delivered with millions of new jobs, the highest wage growth since 2009 and more Americans working than ever before in our history. The Trump economic program of low taxes and less red tape is working wonders for all Americans.

The president promised to make America safer and more respected around the world again. He’s made good on his word.

ISIS has been decimated. North Korea is not test-firing missiles and setting off nuclear bombs, and is instead at the table talking. Iran is being held accountable instead of being bought off.

President Trump promised to nominate judges to the federal bench who will defend the Constitution and not legislate from the bench. With the confirmations of Supreme Court Justices Neil Gorsuch and Brett Kavanaugh – along with historic numbers of circuit and district court judges – it’s another promise made and promise kept.

This president has defied all expectations by outworking, outsmarting and outmaneuvering the failed liberal leadership in the Democratic Party.

Because the president’s desperate opposition is fresh out of ideas. The shameful chaos orchestrated at the Kavanaugh confirmation hearing can only get you so far.

By contrast, President Trump is full of innovative ideas and is poised and ready to press on with his agenda to Make America Great Again.

President Trump will continue to fight for higher quality and more affordable health care for the American people. The president will continue working tirelessly to secure our border. He will continue fighting for fair trade for American workers.

President Trump will continue to reform and streamline the federal government to make it more responsive to the American people. And he will continue to deliver on his peace through strength foreign policy by putting American interests first.

You want to hear the Democratic plan if the party takes control of Congress?  It starts and ends with partisan investigations and multimillion-dollar taxpayer-funded smear campaigns.

The Democratic Party has hit a new low and it is time for a coalition of reasonable Americans to stand up and be counted.

Control of the U.S. House of Representatives is going to come down to 20,000 votes in 15 to 20 districts. If you want to help President Trump continue the success of the past two years, get out and vote Republican and convince your friends and family to do the same!

The election of 2018 is going to be remembered as the one that mattered most. Please be a part of it and vote, because even though President Trump is not on the ballot his agenda most certainly is!