Rockland County Executive Ed Day declared a county-wide State of Emergency Tuesday over the ongoing measles outbreak that has reached 153 confirmed cases, the vast majority of whom are under the age of 18 and unvaccinated.

According to the ban that went into effect at midnight, anyone under the age of 18 who has not been vaccinated against measles will be barred from public places for at least a month or until they receive the Measles, Mumps, Rubella vaccine.

This ban is the first of its kind in the U.S. and will apply to schools, churches, stores, medical facilities, and restaurants. This will not be a police state since no one will be checking for immunization papers and there will be no fines or imprisonments. The goal is to put more pressure on parents to get their children immunized.

DR. MARC SIEGEL: MEASLES OUTBREAKS ARE FAR WORSE THAN THE VACCINE THAT CAN PREVENT THEM

Anyone worried about government overreach and restriction of civil liberties should be more worried by Day’s statement that only 72.9 percent of children between 1 and 18 years of age have been vaccinated against measles. Consider that 95 percent is the magic number needed to create an effective community immunity.

Government has a crucial role in maintaining public health. This role is activated when scientific inquiry is able to determine that you are putting others at risk. Such was the case with smoking tobacco once secondary smoke was shown to damage lungs and cause cancer. From that point forward, it became reasonable and in the interest of public health to ban smoking from public places. Smoking, which is, of course, damaging to one’s own body, is still protected in the name of personal freedom – but not when you are putting others at risk. That restriction is public health at work. 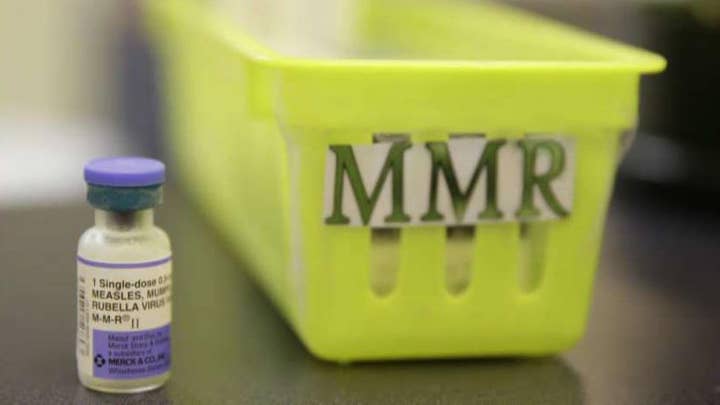 The same reasoning applies to vaccines. With a wildly contagious disease such as measles, which infects 90 percent of unvaccinated individuals who encounter it, stopping the spread requires at least a 90 percent compliance rate. This is especially important first, because of the potential side effects of measles, which commonly include pneumonia and rarely includes brain swelling or death. Second, because the MMR vaccine is a live (weakened) virus vaccine, there are vulnerable groups who are unable to take it, including pregnant women, immunocompromised individuals including those with HIV and receiving cancer chemotherapy, some who have autoimmune diseases and the severely ill. In order to protect this segment of the community, the rest of us must be compliant with our vaccines.

Third, in some cases the measles immunity wears off or the vaccine wasn’t effective in the first place, and the person is at risk without even realizing it. This is the reason I check all my patients for measles immunity before they travel to countries where measles is still endemic. When they aren’t immune, I administer a booster shot.

Exemptions from the vaccine have been given for both philosophical and religious reasons, and in Rockland’s case, it is mostly religious. As a practicing member of the religion in question, I am sympathetic, but public safety clearly predominates. I am only hoping – and expecting – that vaccine compliance will go up.

Banning children from school or restaurants or daycare is a barbaric – if necessary – solution.