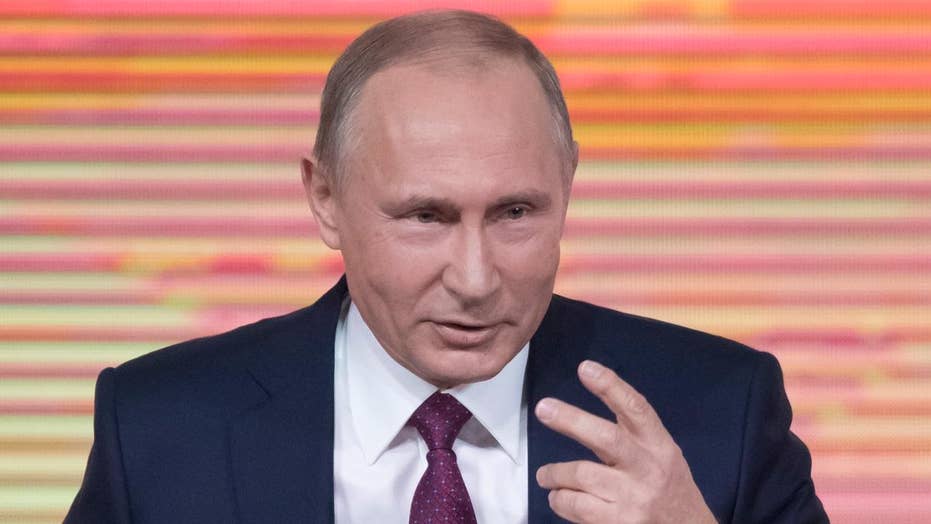 Russian president dismisses accusations of collusion with the Trump campaign; reaction from Heather Conley with the Center for Strategic and International Studies.

As I argue in my recently published book “Putin on the March,” the Russian president continues to aggressively push forward his international agenda. Putin wins much more often than he loses, and he continues to pose a mortal threat to the Western Alliance. We are running out of time to wake up the dangers he poses.

Seemingly echoing President Trump, Putin said Thursday that any suggestion of Russia meddling in the American presidential election had “been invented, made up by people who are in opposition to President Trump with a view to shedding a negative light on what President Trump is doing.”

Putin also praised President Trump’s first year in office, noting that “we see some serious achievements accomplished over the short span he is president … look at the markets, how they’ve grown. This attests to the trust investors show in him on the American economy.”

If President Trump and his national security team are serious about countering Russia they must make dramatic, far-reaching and sustained efforts to respond to the country’s hybrid-war brazenness.

President Trump said Friday that Putin “said some very nice things about what I’ve done for the economy” when the two spoke by phone on Thursday. And the U.S. president also repeated his denials Friday of accusations that his campaign had worked with Russia on election meddling. President Trump told reporters: “There is absolutely no collusion. That has been proven.”

To achieve this, Russia is working relentlessly to undermine NATO, destabilize Europe and America, and dominate the Middle East. Most concerning is that Putin does not need a shooting war to accomplish his objectives. All he needs is the consistent application of pressure, confrontation, and high-stakes moves to intimidate Washington and Europe into backing down.

One of Putin’s most critical strategies has been the use of propaganda and disinformation. He is focused on winning the battle not only in the streets but also on TV, the internet, newspapers, and the hearts of the people.

There is evidence of Putin doing this not just in the United States, but in countries like Belarus. In that nation, Russian media have been escalating an information and propaganda war that is believed to be designed to whip up pro-Russian sentiment against Belarus.

The United States response to Russia’s aggression has been dismal.

Although continued sanctions against the Russian Federation and individuals close to the Kremlin have undoubtedly hurt Russia, they have failed to stop Putin’s continental and global aggression, and failed to meaningfully alter his belligerent stance.

Additionally, all indicators have shown that President Trump does not prioritize Russia as a threat; nor has he planned any actions to counter the Kremlin.

If President Trump and his national security team are serious about countering Russia they must make dramatic, far-reaching and sustained efforts to respond to the country’s hybrid-war brazenness.

To start, the United States must aggressively undermine Russian propaganda arms, like the international TV channel RT (formerly Russia Today), which is funded by the Russian government. RT carries TV programs and runs a website in several languages including English, Spanish and Russian. We must discredit RT’s perceived legitimacy as a news source.

We must also take more steps to show Russia we can take action short of a shooting war against that country if we must. This includes increasing our cyber abilities to shut down parts of Russia’s power grid and jamming the nation’s aircraft communications, potentially causing planes to crash.

Although critics argue that tactics like these would provoke Russia too much, former director of the CIA and retired four-star Gen. Michael Hayden disagrees. He says that “the Russians really don’t want to go to war with us. They are by far the weaker power.”

President Trump has a chance to push back on Putin and turn the tide against Russia’s ongoing campaign of aggression and sabotage. Trump has good people in place to do this. The question remains what the president himself wants to do – a question that must be answered soon.