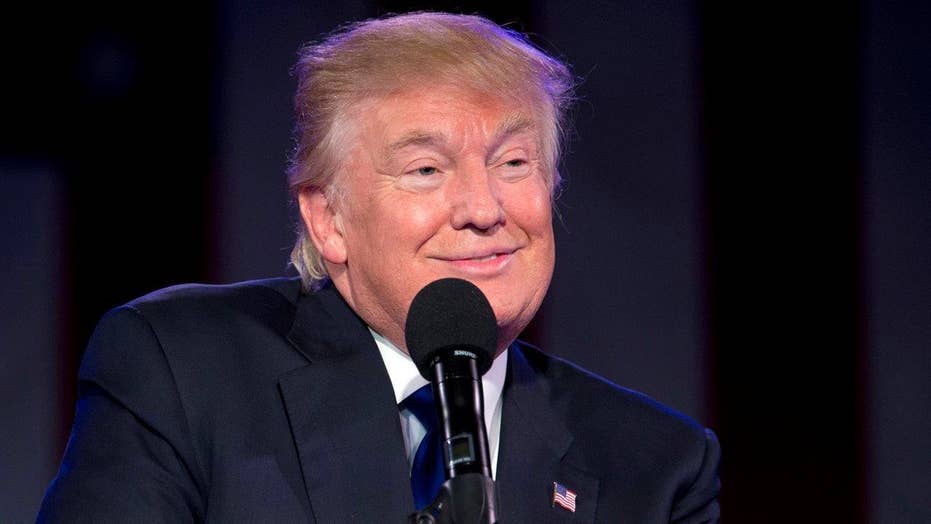 On 'Outnumbered,' the panel reacts to questions over the GOP frontrunner's temperament

As a former Pentagon spokesman who’s been stationed in both Europe and Asia over a 20-year military career, I believe Donald Trump is 100 percent correct to insist that our allies share the burden of collective defense.

While Americans should be proud of our historical role to advance global freedom -- defeating Nazism and imperialism during World War II, communism during the Cold War, and battling jihadist terror networks today, we can’t be the world’s policeman forever.

We can’t afford it.

Nope, we’re $19 trillion in debt and our own national infrastructure is crumbling.  Literally.

Anybody remember the I-35W Bridge in Minneapolis?  On a bright, sunny August day in 2007, it collapsed into the Mississippi River during rush hour, killing 13 and injuring 145.

Anybody seen current pictures of once mighty and prosperous industrial cities like Detroit; Gary, Indiana; or Akron, Ohio?

Isn’t it time to do some nation-building at home?

Meanwhile, aside from natural disasters, our top allies don’t worry about physically crumbling cities.  And that’s thanks to the American taxpayer underwriting their massive security bills since the 1940s.

So let’s take a look at some facts & figures:

NATO is an alliance of 28 nations with a population of more than 910 million.  America makes up over 1/3 the population, yet pays nearly three quarters of the defense expenditures.  Each country is supposed to pay 2 percent of their GDP on defense.  Yet only America, the U.K., Greece, Estonia and Poland are currently meeting their obligations.

During a Washington Post editorial board with Mr. Trump last month, the newspaper noted that Japan and South Korea pay about half of the non-personnel costs of U.S. military basing.  And his response: “Why isn’t it 100 percent?”

Even getting past the massive trade deficits with allies like Japan, we’re funding a system that makes our allies nicer places to live than here.

Take airports, for instance.  Many of our NATO allies, Japan and South Korea put ours to shame.  The first time I set foot in Japan, it was mind-blowing.  Kansai Airport is a marvel of technology, entirely built on an artificial island in the middle of Osaka Bay.  Never seen anything like it.  Two decades later, the state-of-the-art, luxurious air hub still beats JFK, O’Hare and LAX.

And then there’s high-speed rail, subways, highways and ferries.  They’re modernizing while we’re struggling to keep ours on-line.  Case in point, Washington, DC Metro authorities have been discussing potential 6-month closures of certain rail lines for repairs -- which comes after several accident and fire related fatalities in recent years.

But beyond the lopsided financial burden, our allies aren’t pulling their weight on the battlefield either.

As Defense Secretary Robert Gates noted on his way out of the Pentagon in 2011, only a handful of allies were willing to fight and die in Afghanistan.  Some insisted their troops couldn’t fight in the snow or mountains.  On NATO, he said its future is “dim, if not dismal.”  A running joke during my Pentagon days was that “International Security Assistance Force” (ISAF) in Afghanistan, actually stood for “I Saw Americans Fighting.”

In the Middle East, it’s even worse.  While we spend billions to defend Saudi Arabia and other Gulf State allies, we get practically nothing.   Though they’ve signed up to fight ISIS, the vast majority of airstrikes are American.  The Saudis ought to pay the bills, especially considering the role their hardline clerics play in creating jihadist networks in the first place.  Let’s recall that 15 of 19 hijackers on 9/11 were Saudis.  The Iranians are even more hostile, yet don’t claim to be an ally.

While America shoulders the free world’s defense burden, we must recognize the threats have changed.  That’s despite the panicking establishment’s insistence they haven’t, both on the left and the right.

While the Soviet Union was the biggest threat during the Cold War, it no longer exists.  Today’s greatest long-term threats to Europe and America are radical Islam-inspired terrorism and unchecked immigration, which by the way, go hand in hand.

Next is nuclear proliferation and rogue nations like Iran and North Korea.  Then the rise of China, busily hacking and cheating its way to superpower status.  They don’t have to conquer us if we internally collapse.

Bottom line, our allies must get serious about defense.  If they can’t pull their own weight, why should we go broke carrying them on our backs?

Time for a fresh approach.

J.D. Gordon is a retired Navy Commander who served as a Pentagon spokesman in the Office of the Secretary of Defense from 2005-09. He serves as senior adviser to several Washington-based think tanks.