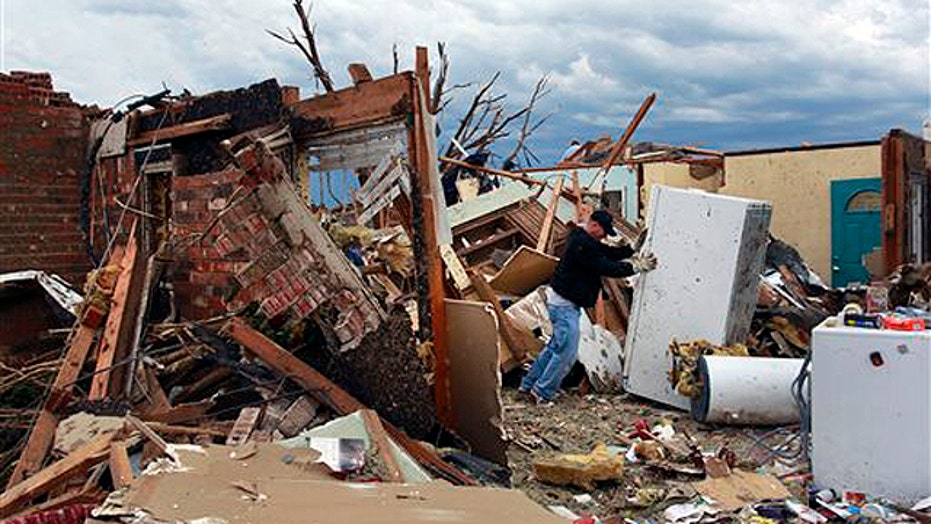 Search efforts winding down after tornado

Tragedy in Oklahoma: tornadoes devastate a community, an elementary school is leveled and the death toll stands at 24 dead.

Does the idea of the existence of a loving God get swept away in the wake of such storms like a tin building or mobile home?

Looking at the outpouring of prayer and the massive faith-based response to help those affected, it doesn't seem to be the case. In fact, it appears to be just the opposite. I've lost count of the times I’ve read or heard the phrase, "Our thoughts and prayers are with the people of OKC."

Still for some, the call for prayers for the victims and their families seems almost irrational. They say, "If prayer didn't work before the storm to prevent it, why should we think it would work after the damage is done?"

In moments like these, we have little time to waste asking questions like "why did this happen?" The urgent need of the hour is to give our collective focus and efforts toward those who are hurting and are in need.

The recurring story in this country is that when tragedy strikes, God shows up through the lives of countless thousands whose faith moves them to action--to give their time and resources to help the hurting.

Besides the tragic reports, there will be stories of hope that abound as well. Stories of not only the massive numbers that were spared or recovered in the rubble, but the inexplicable comfort those families most affected will experience.

With little time to waste in mere speculation of God’s goodness and existence, we must remember some important things, lest in our pain we wrongly conclude that turning to God for help is a futile exercise.

It's self evident that our world runs by natural laws and processes. Wind currents, thunderstorms, pressure and temperature changes all contribute to form things like tornadoes and hurricanes. Without tectonic plate movement (which results in earthquakes), life on earth would not be possible.

Is the creator of the car, a cruel and thoughtless person because of the millions of people that have died in auto accidents?

Those natural laws affect everyone, believers and non-believers alike. In reality, this world we inhabit is a pale blue dot of hope in the midst of a violent, hostile universe.

The existence of life, consciousness and reason in the midst of this vast, uncaring universe is the wonder of wonders. The fact that we are learning to protect ourselves from these natural forces is the result of these gifts.

Besides creating a world run by natural laws, which can be understood and harnessed, God made humans with the capacity to choose good or evil, knowing many would choose the latter, which gives insight into the atrocities committed in Boston or Newtown, Conn.

Yet, God took things a step farther. He wrote Himself into the script of this cosmic drama. He became a man in Jesus Christ and felt the sufferings of the entire world. He also demonstrated who He was by subduing the forces of nature, calming storms and ultimately defying death itself.

When we pray, we are engaging our Creator and asking for His help. Just as there are natural laws, there are spiritual laws as well, and prayer seems to be one of them. Rather than turn from God in dark times, we turn to Him because we know that there must be an ultimate source of comfort and strength to tap into.

Skeptics use moments like this to mock and ridicule people of faith for their prayers. Yet, this doesn't take away the pain, it just takes away the hope.

Faith is what will help those who have lost loved ones move forward and believe that something good can come out of something so tragic. It is also a vital tool that will help a city rebuild stronger and more compassionate than ever before.

Rice Broocks is co-founder of the Every Nation family of churches, and the author of "God's Not Dead: Evidence for God in an Age of Uncertainty" (Thomas Nelson, March 2013).