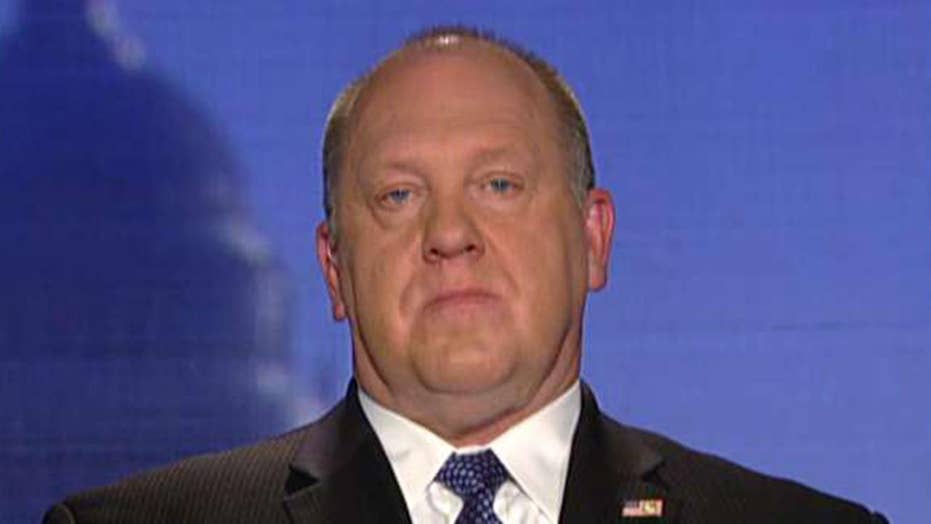 Homan on Trump's address: Hope he shares border data with the American people

Trump to address 'crisis' at the border during Oval Office speech; former acting ICE director Tom Homan weighs in on the issues the president should address.

President Trump’s address to the nation Tuesday night from the Oval Office is an important step to make Americans aware of an undeniable truth: we have a crisis on our southern border, and the time for action is now.

Thankfully, President Trump doesn’t just complain about problems – he solves them. Democrats in Congress have a responsibility to put partisanship aside and join the president in supporting his commonsense border security proposals.

Once that happens, the partial government shutdown will end, federal workers will get their paychecks, and our national security will be strengthened as a result of President Trump’s actions.

CLICK HERE FOR KAYLEIGH MCENANY:  ON BORDER SECURITY, PELOSI AND SCHUMER PLAY POLITICS WHILE TRUMP FIGHTS TO PROTECT US.

While partisan politics has infused the national immigration conversation, an unvarnished, clear-eyed look at the facts reveals a troubling, decade-long problem demanding an immediate answer.

That answer is outlined quite clearly by President Trump via acting Director of the Office of Management and Budget Russell Vought in a letter. The solution is a fair, just compromise that addresses the immediate needs of vulnerable populations while simultaneously deterring illegal immigration and protecting American citizens.

The president’s solution to the border crisis entails $5.7 billion for a barrier along our border with Mexico, additional revenue for law enforcement personnel and immigration judges, and funding for more detention beds and the humanitarian needs of illegal immigrant arrivals.

The Trump plan would end both the crisis on our southern border and the partial government shutdown with an effective plan of action to replace the years of endless talk and debate.

Here’s a look at just three of the problems caused by the lack of adequate border security we face today: the drug crisis, criminal crossings, and the suffering of people coming to the U.S. illegally.

About 300 Americans die each week from heroin – and 90 percent of the heroin in this country comes across our southern border.

Approximately 1,390 Americans perish as a result of opioids on a weekly basis.  Fentanyl is a synthetic opioid 50 times more potent than heroin. In 2017 alone, enough fentanyl was seized on our border to kill every man, woman and child in this country.

In just one year the amount of heroin, methamphetamine, and fentanyl seized on our southern border increased by 22, 38, and 73 percent respectively – a concerning increase over a short period of time.

In total, 1.7 million pounds of narcotics were seized by the U.S. Customs and Border Patrol in 2018.

Reversing the trend means building a barrier and increasing the ranks of our Border Patrol in order to stymie the flow of illicit drugs into our homeland.

In addition to the illegal drug flow, thousands of criminals and gang members are apprehended at our border annually.

In fiscal year 2018, 256,086 illegal immigrants were removed by Immigration and Customs Enforcement (ICE).  Among the deported, nearly 6,000 were known or suspected gang members.

All of these crimes were preventable if the laws had been enforced and our border secured.

This number is supplemented by the fact that more than 3,000 special interest aliens were caught trying to cross our border.

According to former Homeland Security Secretary Jeh Johnson, who served in the Obama administration, special interest aliens are “potential national security threats to our homeland” who demand “immediate attention,” “continued vigilance,” and “bringing the full resources of the Department to bear…,” as outlined in a 2016 Obama-era memo.

In addition to drug flows, criminal activity and potential national security threats must be stopped from entering our homeland.

Beyond thwarting illegal drug traffic and crime, our crisis on the southern border entails a humanitarian component as well.

According to Doctors Without Borders, 31 percent of migrant women and 17 percent of men making the journey to our southern border are sexually assaulted. Another 7-in-10 migrants are victims of violence during the trek north.

As Homeland Security Secretary Kirstjen Nielsen noted last June, there has been a 314 percent increase in cases where “minors have been used and trafficked by unrelated adults in an effort to avoid detention.”

In other words, children are being trafficked, and this trafficking is being incentivized by a system that encourages rather than deters illegal migration.

This is why President Trump, in addition to border security measures, has asked for $800 million “to address urgent humanitarian needs … (including) funding for enhanced medical support, transportation, consumable supplies … and additional temporary facilities.”

The flow of illicit drugs, criminal illegal immigrant crossings, and the humanitarian crisis on our border can all be stopped – if only Democrats in Congress make the responsible decision of acknowledging the facts and embracing the Trump compromise.

By cooperating with the president instead of endlessly confronting and criticizing him, Democrats can join with Republicans in protecting American citizens and vulnerable populations making the perilous journey to our southern border.

The power is in the hands of Democrats. All Americans will benefit if the Democrats put our national interests ahead of their political interests and join with President Trump to make our border more secure and end the government shutdown.