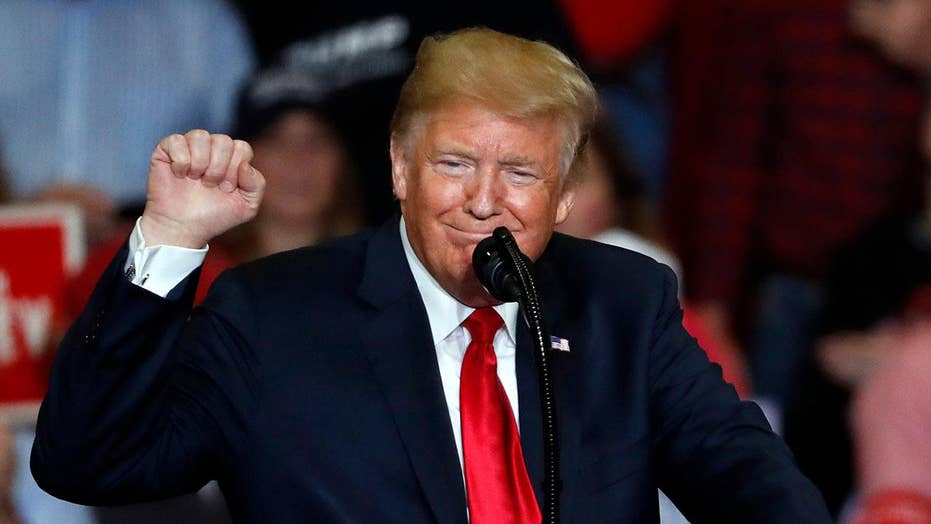 Tuesday’s midterm election results confirm beyond a doubt that President Trump is a political force of nature like we’ve never seen. He has a hugely successful agenda that tens of millions of Americans support wholeheartedly.

The midterms this year will be remembered as an awesome display of American democracy, as voter turnout levels went through the roof in a non-presidential year.

The political experts who historically bemoan the lack of voter participation in midterms saw Americans flock to the polls to weigh in on the most consequential off-year elections in recent memory.

In an unprecedented fashion, President Trump took matters into his own hands by tirelessly campaigning across the country for Republican candidates and making the difference in many high-stakes races.

In a year in which Democrats were supposed to completely dominate in President Trump's first midterm elections, the American people spoke loudly and delivered a mixed bag of results.

Despite the left’s permanent obstruction campaign against the president from Day One and the massive amount of energy it generated, as of this writing the Democrats have lost at least four incumbents in the U.S. Senate and only managed to secure a small majority in the House.

There’s only one way to describe it: there was supposed to be a surefire blue wave hitting our shores, but it didn’t happen.

Republicans had a very big night in the Senate.

Not only did Republicans knock off these incumbent Democrats – they held a competitive seat in Tennessee, with Republican U.S. Rep. Marsha Blackburn's impressive victory to fill a seat now held by GOP Sen. Bob Corker, who did not see re-election.

With the winners of three Senate seats still to be decided at this writing, it’s nothing short of amazing that Republicans have lost only one incumbent in the Senate – Sen. Dean Heller of Nevada.

On the House side, speculation abounded that the Democrats could have a historic night. Would they pick up 50 House seats against the party of a president who lost the popular vote in 2016? Not even close.

How about picking up 40 seats against a president who the mainstream media has tried to destroy day in and day out for two years? No so much.

In the end, the Democrats managed to recapture the House by picking up only about 30 seats. This will hand House Democratic Leader Nancy Pelosi of California, who is expected to be elected speaker of the House, a largely unmanageable majority of only about seven seats.

Let me be the first to predict that this new miniscule House Democratic majority will be a two- year proposition and not one day longer. It was President Trump’s fighting spirit that kept Republican losses in the House down.

A seven-seat majority (or something close to it) is not a mandate to try to pass the Democrats’ socialist wish list and conduct endless investigations.

The Democrats’ top priority – to conduct partisan investigations and meritless witch hunts – will quickly lose favor with the American people and will hurt them badly going into the 2020 elections. Hardworking taxpayers want innovative policy solutions, but the Democrats have none.

The American people want a vibrant economy and good jobs, higher wages, a secure border and better health care that is more affordable. The Pelosi-led Democrats should listen to the American people instead of obstructing and going off the investigative deep end.

In the end, President Trump and the Republicans running for Senate and House had a big arrow in their quiver due to our rapidly growing economy, thanks to the amazing success of the Trump tax cuts and deregulation program.

Liberal calls to abolish the Immigrations and Customers Enforcement (ICE) agency and open up our borders and not enforce immigration laws also weighed heavily on the minds of voters. The lack of a positive agenda hurt the Democrats at the polls and will continue to hurt them going forward.

Not only did President Trump pave the way to victory in decisive U.S. Senate races around the country – he also was the key factor in several successful gubernatorial races that will be critical as we start to look forward to presidential swing states in 2020.

The importance of the gubernatorial election victories of Republican Ron DeSantis in Florida, Mike DeWine in Ohio, and Kim Reynolds in Iowa cannot be overstated. Let’s also remember that accordingly to publicly available data, they all could have easily lost – which makes these wins that much sweeter.