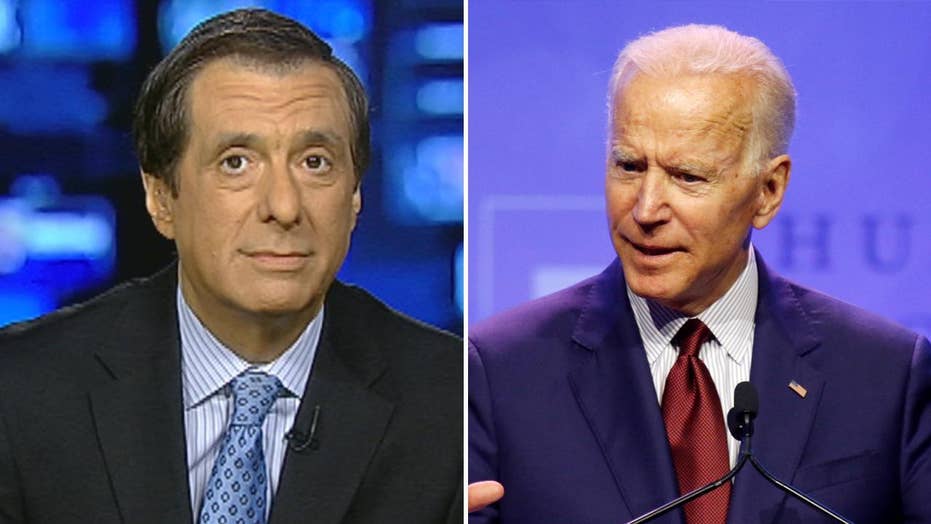 Howard Kurtz: How the Democratic left is trying to slow the Biden Express

'MediaBuzz' host Howard Kurtz weighs in on how the progressives running for president are attacking moderate Democratic candidate Joe Biden.

Even during coverage of the solemn commemoration of the 75th anniversary of D-Day last week, most of the media refused to declare a cease-fire in their daily attacks on President Trump.

Because the invasion was about fighting Nazis, you could pretty much guess where some of the comments went. Once more it was hard to tell comedians from others in the media.

On “The Last Word with Lawrence O’Donnell” on MSNBC, O’Donnell used the D-Day anniversary to slam Trump, Trump’ father, and even his grandfather. O’Donnell bashed them for not being in the military, noting, “That's just not what they do.”

Neither did socialist O’Donnell serve in the military, FYI.

Then O’Donnell slammed Trump’s dad in a tasteless and disgusting way, arguing he was “actually arrested at a Ku Klux Klan rally in New York City years before so we don't really know just how sympathetic to Hitler Donald Trump's father might have been.”

However, this is one of those slanders that even lefty PolitiFact won’t stomach. It wrote in March that Fred Trump “was promptly released without any charges.”

It’s unclear if Fred Trump was participating in the KKK march or “disrupting the parade,” according to one historian.

Fellow MSNBC host and pretend-Republican Nicole Wallace freaked out that Trump used an interview to attack “another American hero” – former Special Counsel Robert Mueller. “The View” host Whoopi Goldberg turned D-Day into a pro-illegal immigrant rally. “We fought for the right to help people from other countries,” she said.

What’s especially interesting is that Trump’s D-Day speech was so good that even CNN’s Chief White House Correspondent Jim Acosta and “Morning Joe” both complimented it.

“This is perhaps the most on-message moment of Donald Trump’s presidency today” and he “rose to the moment,” Acosta reported. And “Morning Joe” host Joe Scarborough described it as “the strongest speech of his presidency.”

“It's possible he was dishing out a lot of that red meat while he was sitting down with Fox before giving this speech,” Acosta speculated.

But it turns out that Acosta was wrong – what a shock! HuffPost contributor Yashar Ali tweeted: “I've spoken to several reporters who were present at this event, it was President Macron who in fact was late to the ceremony.”

Perhaps the most-disgusting reaction to D-Day came from an op-ed in The Washington Post. In a D-Day anniversary piece, Ruth Lawlor urged “don’t forget the dark side of American war efforts.” She wrote: “By romanticizing World War II, we have neglected to confront the darker underbelly of American military engagement.”

The Post chose to publish this on the D-Day 75th anniversary.

Trump threatened tariffs that would have damaged trade between the U.S. and Mexico. But the tariffs won’t be happening, because Mexico is taking action to reduce illegal immigration.

The new plan calls for Mexico to send troops to its southern border to stop the flood of illegal immigrants entering Mexico headed for the U.S. and to let the U.S. return asylum applicants to Mexico while they await a ruling.

The result wasn’t universally well-received. CNN Senior Political Commentator David Axelrod gave Trump no credit. He described the win as “crawling back off the limb and, predictably, declaring victory.”

Trump hater and MSNBC regular Rick Wilson mocked how the president’s supporters “actually believe it.” He added: “My GOD. The gullibility is spectacular.”

Thursday night, as the compromise appeared to be taking shape, NBC Anchor Lester Holt was still a doomsayer. “It is the latest threat in President Trump's growing trade war and experts warned Americans will pay a price.”

NBC Correspondent Tom Costello followed and admitted the “potential compromise” seemed to be working, with “Mexico deploying 6,000 troops to its border with Guatemala.”

The media had been warning of economic cataclysm. CNN wrote that: “Tariffs on Mexico could cost America 400,000 jobs, a new report says.”

And The New York Times emphasized how Texas would be hurt: “Which States Will Be Hit Hardest by Trump’s Tariffs on Mexico.”

Even Hollywood got into the act with singer and actress Barbra Streisand complaining: “Trump’s idiotic tariffs on Mexico have driven stocks down more than 300 points and will raise costs for everyone in the US. Maybe the country shouldn’t be run by someone forced into bankruptcy 6 times.”

But things didn’t turn out that way and the result netted the president some surprise support. Trump critic and Daily Wire founder Ben Shapiro called the result “Excellent Trump.” “The tariffs don’t go into effect and Mexico devotes more resources to stopping illegal immigration. Why isn’t that a win?” he tweeted.

Biden and his flip-flops

This followed an embarrassing mix of opposition and affirmation of support for the Hyde Amendment. The amendment prevents federal spending on abortions except in cases of rape and incest, or protecting the life of the mother.

CNN Anchor Brianna Keilar did an amazing job pointing out how inconsistent Biden was being. She pushed Biden Communications Director Kate Bedingfield about how Biden’s position had switched “from Wednesday to Thursday.”

It was a battle of wits and Keilar was far better armed. Bedingfield stammered her way through canned responses. Keilar even followed up by asking about the plagiarism in Biden’s climate change plan. It was impressive.

ABC Congressional Correspondent Mary Bruce called the move by Biden “an abrupt about-face.” The chyron on screen referred to it as “Biden’s Abortion U-turn.” Bruce mouthed the propaganda response, noting that staff “insist that the mounting political pressure this week did not impact Biden’s announcement.”

Of course it did.

CBS and NBC elected to ignore the story entirely Friday night. NBC even aired a piece on a movie theater that caters to dog owners and their pets. (Journalism is going to the … well, you know what I mean.)

The Washington Post’s Matt Viser and Michael Scherer explained that Biden “reversed a position he’d held for four decades.” They called it “the rockiest week of his campaign.”

The Times looked at the issue almost entirely from the left. It didn’t include a single conservative or pro-life voice critical of Biden. It was more about Biden’s “instinct for moderation and consensus” and how that had hit a wall.

The Times story did admit that Biden “is running headlong into an energized base that has grown far more liberal in the decade since he became vice president.” That’s a rare acknowledgment for media that like to pretend the right has shifted more than the left. The more-than-1,600-word story also mentioned Biden is Roman Catholic, but failed to note that the church is against abortion.

The issue of abortion continues to dominate the news – typically from the far left. HuffPost even wrote a piece headlined “Women Aren’t the Only People Who Get Abortions.”

NBC’s White House Correspondent Kristen Welker shockingly called the Hyde Amendment a “controversial abortion law,” even though 58 percent of the American public “opposes allowing Medicaid funding to be used for abortion services,” according to Politico.