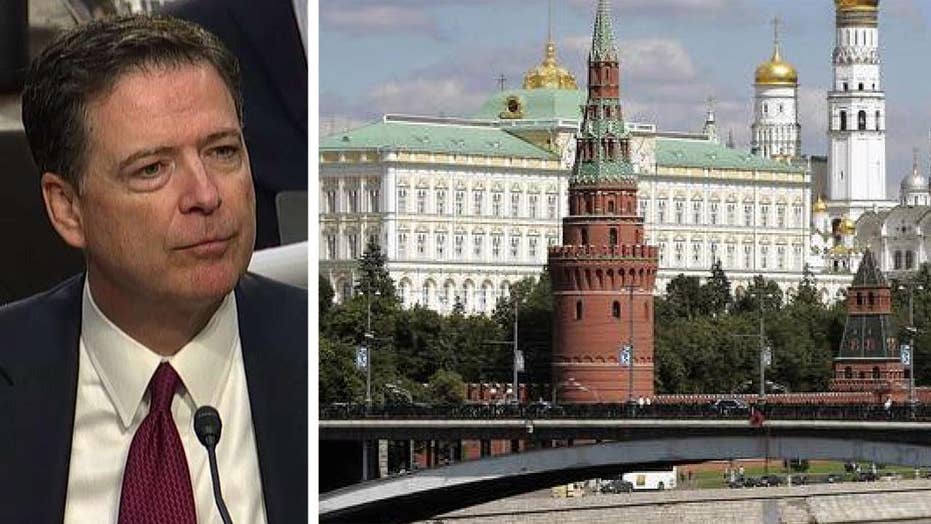 Former FBI director testifies: They did it with purpose, sophistication and overwhelming technological efforts

Comey emphasized that Russian cyber-attacks may only be expected to continue, that they are not isolated to either political party, and that Russia will be a threat as long as the U.S. does not assertively address the threats.

This is not a conspiracy theory. Russian influence is a real and tangible threat.

As for President Trump, Comey said in his opening statement that he was personally shocked when he learned the president had fired him, saying, “the shifting explanations confused me and increasingly concerned me.”

Comey continued even more strongly: “And although the law required no reason at all to fire an FBI director, the administration then chose to defame me and, more importantly, the FBI by saying that the organization was in disarray, that it was poorly led. That the workforce had lost confidence in its leader. Those were lies, plain and simple.”

This was not the only moment during his testimony that Comey expressed his doubts in the president’s honesty.  When asked why he felt the need to carefully record details of his meetings with President Trump, he replied, “I was honestly concerned he might lie about the nature of our meeting so I thought it important to document.”

Senators questioned Comey on everything from his personal relationship with the president to the status of investigations into the campaign. Many senators focused on Comey’s language in his meetings with Trump and the chain of command Comey had to follow.

Senator Dianne Feinstein, D-Calif., asked why Comey did not inform Trump that their meetings were inappropriate. Comey responded by saying, “Maybe if I were stronger, I would have.”

Comey continued, saying that he was shocked the president would ask him to “let things go” and was never sure of how to respond. As he confirmed for Senator Angus King, I-Maine, however, Comey was firm in his belief that the president’s suggestion to drop the Russian investigation was a directive.

Comey acknowledged that, upon reflection, he could have been more explicit with the president in his unwillingness to discuss the Russia investigation throughout the first four months of 2017.

Despite this, Comey remained confident that he acted appropriately.

And as for the seriousness of the Russian threat, Comey made it clear that Vladimir Putin will remain determined to influence U.S. elections in 2018, 2020, and beyond.

Unequivocally, and on multiple occasions, Comey stressed that the Russian government remains a threat to our national security and our national sovereignty.

Intelligence Committee Chairman Richard Burr, R-N.C., asked Comey if he had any doubts that “Russia attempted to interfere in the 2016 election.” The former FBI director replied with an emphatic, “None.” He then said he had “no doubt” that “officials of the Russian government were fully aware of these activities.” That is eerie.

Answering Senator King as to whether Russian interference was a “one-off proposition, or...part of a long-term strategy,” Comey stated that “it is a long-term practice of [the Russians].” “They’ll be back,” he added.

As Comey asserted, the entire U.S. intelligence community holds the “high confidence” judgement that the Russian government interfered in the 2016 US election.

This systemic aggression carried out by Vladimir Putin must not stand. These attacks will be, at the very least, a distraction for our government going forward -- both domestically and in terms of foreign policy.

And this should not be a partisan matter. “It’s not about Republicans or Democrats,” Comey said. “They’re coming after America, which I hope we all love equally.”

I could not agree more.

As investigators, both in Congress and under the director of Special Counselor Bob Mueller, reach a conclusion on the Trump campaign’s role in Russian meddling, we must continue to work toward a broad public consensus that Vladimir Putin is an intolerable threat to our nation’s future.