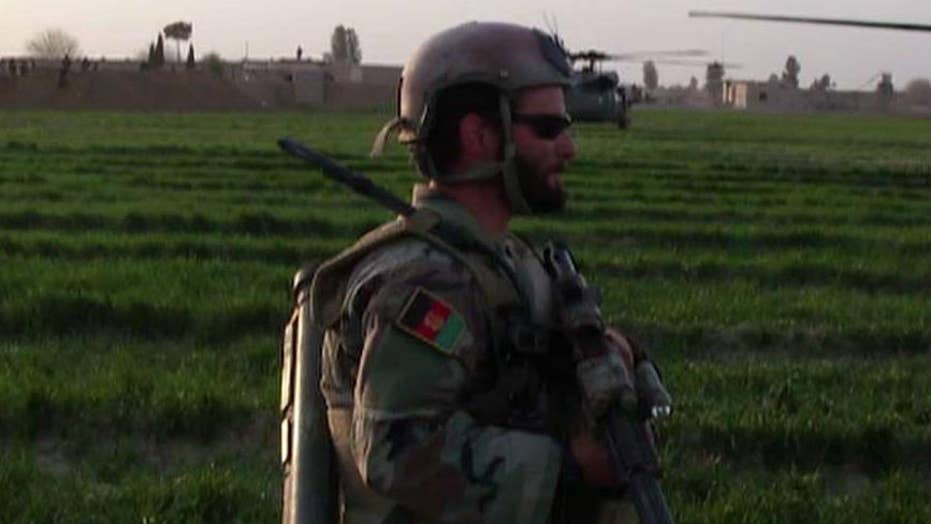 If anyone deserves a presidential pardon in this Christmas season, it’s Army Maj. Mathew Golsteyn, a heroic former Special Forces officer who risked his life for our country in Afghanistan.

Golsteyn is the victim of a grave injustice – now unbelievably facing a murder charge for the death of a Taliban bombmaker who built a bomb that killed two U.S. Marines.

President Trump should follow his instincts and give this brave officer a pardon now for a charge he never should have faced.

CLICK HERE FOR GEN. ANTHONY TATA: TRUMP IS PERFECTLY WITHIN HIS AUTHORITY TO REVIEW CASE OF GREEN BERET CHARGED WITH MURDER

What was Golsteyn’s “crime?” He prevented the bombmaker from killing more American service members and more of our Afghan allies. Would we be better off if the bombmaker were still on the loose, as we buried more Americans he was responsible for killing?

Golsteyn deserves the thanks of a grateful nation – not a murder charge.

After Golsteyn was unjustly and absurdly charged with murder, President Trump tweeted on Dec. 16: “At the request of many, I will be reviewing the case of a ‘U.S. Military hero,’ Major Matt Golsteyn, who is charged with murder. He could face the death penalty from our own government after he admitted to killing a Terrorist bomb maker while overseas.”

This review should not take long. As someone who spent over 29 years in the Army in special operations, counterterrorism and intelligence operations, I can tell you that this an open-and-shut case: prosecuting Golsteyn is crazy.

How on Earth do we expect anyone to volunteer for our military if they have to worry not just about being killed by hostile forces, but about being prosecuted for doing what they were assigned to do?

Soldiers have a mission to fight for our country and kill our enemies. Who in their right mind would say we are better off letting our enemies kill us?

Soldiers have a mission to fight for our country and kill our enemies. Who in their right mind would say we are better off letting our enemies kill us?

President Trump should not only pardon Golsteyn. The president should give this American hero back the Silver Star for valor that he was awarded before he was charged with murder and that the Army later took back.

Then the president should order the Army to promote Golsteyn and give him a letter of apology from the secretary of the Army. All this could be done in about two hours by changing Golsteyn’s records on a computer.

In addition, President Trump should direct incoming Acting Secretary of Defense Patrick Shanahan to investigate this eight-year fiasco of injustice against Golsteyn and direct Shanahan to fire and possibly prosecute everyone involved.

Here’s how Golsteyn came to be charged with murder:

During the Battle of Marja in southwest Afghanistan in 2010, Golsteyn (then a captain) was leading his Special Forces team to capture or kill a Taliban bombmaker who the CIA had identified as the man who built and planted a bomb that killed two Marines just two days earlier.

The Marines who were killed were Sgt. Jeremy R. McQueary, 27, and Lance Cpl. Larry M. Johnson, 19. Other Marines were wounded at the same time by explosives set as a booby trap on a garage door.

The Special Forces soldiers did their jobs, as they always do, and captured the bombmaker and turned him over to the Afghan military. It is important to note that there were no detention centers, jails or other facilities nearby, so turning over the terrorist to Afghan forces was the smart tactical option.

Unfortunately but predictably, the Afghan forces then released the Taliban bombmaker, who would have most certainly then set out to kill more Americans. The Special Forces unit then learned that the terrorist bombmaker they just captured had been released.

The American soldiers did their job, found the bombmaker and killed him. By doing so, they unquestionably saved American lives.

Since this successful operation eight years ago, Golsteyn has been investigated twice and cleared by the Army. And yet, astoundingly, the secretary of the Army has taken back his medals and now charged him with murder.

The investigation was reopened after Golsteyn spoke to Fox News' Bret Baier in 2016 and told the story of killing the Taliban bombmaker.

Less than 1 percent of the people in our great nation serve in the military. Less than 10 percent of that 1 percent have seen sustained life-threatening combat. Those who serve do not ask for parades, not even a thank you. They serve and they volunteer for certain danger for many reasons – but they serve.

I promise you that there is at least one thing they do not want or need – and that is our judgment.

What did Golsteyn face in Afghanistan?

Imagine your worst day, exhausted, scared, surrounded by competent men who want to kill you. You are in lung-crushing terrain, altitude that most only fly in. Add in the responsibility of the safety of men you are leading, add a mission to capture or kill a terrorist who only days before had killed two Marines with whom you had worked.

This is a rather typical day for leaders and soldiers in war.

This is not something that 99 percent of the people in our country can really comprehend. But none of that has stopped blithering idiots from giving their uniformed opinion and judgment and criticizing Golsteyn – one of the true heroes of this country.

If the Special Forces had allowed the Taliban bombmaker to go back to making bombs and he killed more Americans, the same idiots who are now yelling about Matt Golsteyn would be saying he was derelict in his duty for letting the bombmaker go free.

The Constitution gives the president of the United States the power to pardon “for Offenses against the United States.” In the case of Golsteyn, the interests of justice cry out for President Trump to use this pardon power to throw out the murder charge against a brave soldier and patriot who has been treated disgracefully by the Army.