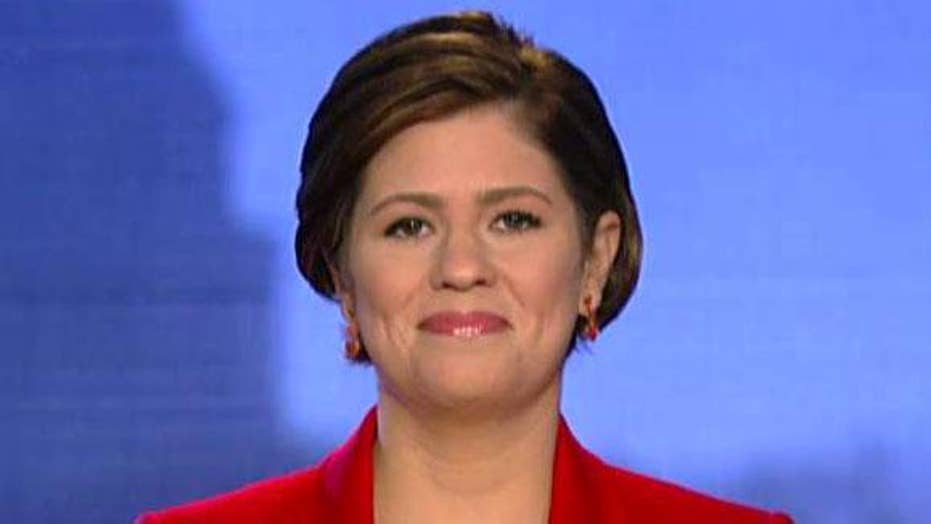 Wife of Green Beret charged with murder defends her husband

Julie Golsteyn, whose husband Maj. Mathew Golsteyn has been charged with murdering a Taliban bomb maker in 2010, blasts the 'disgusting' characterization of her husband.

The wife of a former Green Beret -- who's being charged with murder in the death of a suspected Taliban bombmaker -- is slamming the Army, suggesting to Fox News her husband's fate is being handled in a different manner compared to controversial but high-profile figures such as Bowe Bergdahl and Chelsea Manning.

The comments from Julie Golsteyn, the wife of Maj. Matt Golsteyn, come just days after President Trump announced he would review the matter. Bergdahl was spared jail time after leaving his post in Afghanistan and Manning, a convicted leaker, had her 35-year prison sentence commuted in 2017 by then-President Barack Obama. Golsteyn, on the other hand, could face the death penalty if he is found guilty of a murder charge filed against him last week.

“This is the Army of Manning and Bergdahl,” Julie Golsteyn told Fox News’ "America’s Newsroom" on Tuesday. “And if those are the kinds of people that we want in the Army that’s what we are going to end up with because who are we going to have in our ranks if this is what we do to our good men?”

Julie Golsteyn also spoke out against the way the media is portraying her husband's role in the death of the suspected bombmaker, who she described as a “known, enemy combatant.

“The characterization of my husband that is out there is absolutely incongruent with the person he is,” she said. “This is someone who tells me that I’m intense. This is someone who tells me when someone cuts me off in traffic to bless, not curse…that maybe that person is having a bad day. This is absolutely disgusting how they are portraying him as a cold-blooded murderer.”

Golsteyn, a once-decorated soldier, was recalled to active duty last week only to be charged with murder stemming from an alleged incident during his 2010 deployment in Afghanistan. The nature of that killing remains in dispute and the murder charge facing Golsteyn comes after years of on-again, off-again investigations by the Army.

A military tribunal that probed the incident years ago initially cleared Golsteyn -- but the investigation was reopened after Golsteyn spoke to Fox News' Bret Baier in 2016 and admitted he killed the suspected Taliban bombmaker.

The lawyer representing Golsteyn, meanwhile, told Fox News on Tuesday that he hopes Trump takes a look at the plight of one of his other clients – Navy SEAL Edward Gallagher.

Gallagher, who is alleged to have killed an injured ISIS prisoner of war in Iraq – among other war crimes -- is set to be arraigned in the coming weeks, attorney Phillip Stackhouse said.

“As much as I would love for the president to look at Matt’s case, I would very much appreciate the president taking a look at Eddie Gallagher’s case,” Stackhouse told Fox News on Tuesday.

The lawyer said he has “not heard from anybody in the White House” yet, but would very much look forward to "hearing from someone.”

The Navy’s three-page criminal count sheet against Gallagher lists a slew of alleged offenses, including premeditated murder, drug abuse and willfully firing off his weapons “under circumstances such as to endanger human life” and “of a nature to bring discredit upon the armed forces.”

He, his brother Sean and his legal team are denying the charges, and top Iraqi military officials have spoken out against what is alleged to have transpired.

Stackhouse also appeared Monday on "The Story with Martha McCallum," where he downplayed some of the criticisms of Trump speaking out about Golsteyn’s charges.

“Additionally as you know the president has the power of the pardon and he could issue a pardon to Matt for these charges and those are the things we are hoping that he is looking at doing,” he added.

A Pentagon spokesperson, responding to questions after Trump's announcement of a review, has said “the allegations against Major Matt Golsteyn are a law enforcement matter."

“The Department of Defense will respect the integrity of this process and provide updates when appropriate,” Army Col. Rob Manning told the Associated Press.