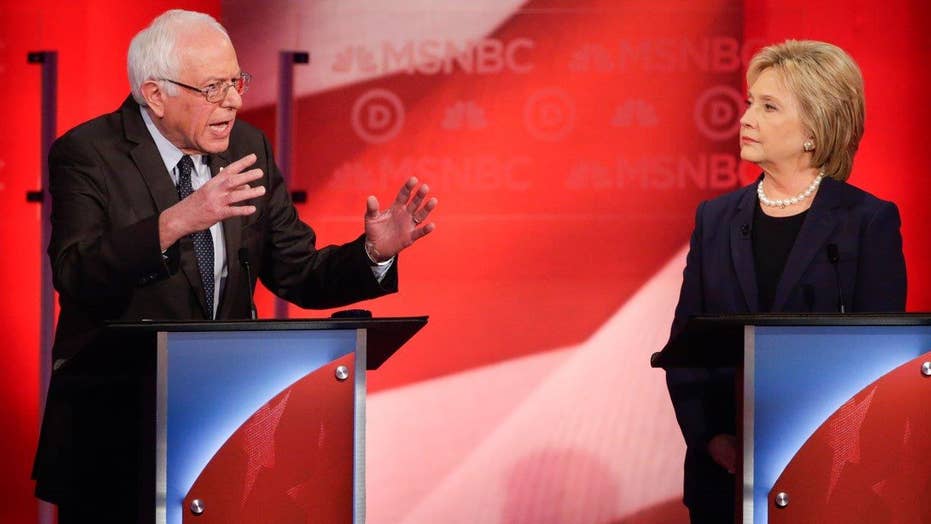 Reaction from the 'Special Report' All-Stars

It means no credibility leapfrogging as in 2008 when, following a third-place humiliation in Iowa, she told a New Hampshire debate audience: “I’m running on 35 years of change.”

Or, on Thursday night in Durham, New Hampshire, with Clinton repeatedly invoking the Bin Laden raid – be it her hard work on behalf of President Obama -- or her hard work, post-Obama, on the speech circuit.

A Damsel. In Distress? Eight years ago in New Hampshire, Hillary’s back was against the wall: another decisive loss to Barack Obama and her campaign would come to an abrupt end. We remember it now as the week in which Hillary departed from her icier norm and shed a tear.

The question in 2016: is Clinton’s current position anything to cry about? Yes, she ended up in a dead heat in Iowa with Sanders despite enjoying a 40-point lead there last summer. New Hampshire is problematic: it’s a 20-point deficit, if this post-Iowa NBC News/Marist poll is to believed.

But Sanders is no Obama – neither in his organizational skills or ability to build a majority coalition among Democratic voters. Unlike 2008, when she was on the wrong side of history (with a party and a nation looking to make a larger statement), Clinton needn’t panic in the moment.

Which begs this question about the candidate – other than if and when she’ll shed a tear between now and Tuesday:

Why Can’t She Be Herself? As the Clinton team ponders how to move on post-New Hampshire, it might want to place a call to the past campaigns of Mitt Romney, John McCain and Bob Dole.

All were presidential nominees in their 60’s or 70’s, running a second (in Dole’s case, a third) and final time as their party’s establishment choices. All made the tactical error of election-year conversions to more ideological personae that rang hollow with their party’s grassroots activists. Of course, all three lost.

The same’s true of Hillary at present: atop the Democratic pyramid longer than Americans have owned iPhones, she’s a known quantify – resume-solid, most likely a dealmaker like her husband should she get his former job.

Yet her oft-repeated “I’m a progressive who likes to get things done” sounds too much like a catchphrase when stacked up against a 74-year-old fervent socialist who says what he means and means what he says, Leninist though it may be.

From the debate’s outset, an edgy-looking Clinton was intense – and intent on making the point that Sanders’ 18 trillion wish list of expansive government is but pipe dream.

She’s right, of course. But she’s missing the point: Successful Democratic presidential candidates thrive on personality and passion. The party’s most fabled standard-bearers – JFK, Bill Clinton, Obama – ran as optimists, not scolds. The sooner someone convinces Clinton that it’s time to shift from upbraid to upbeat – and stop trying to beat up Bernie – the better her long-term prospects.

Sanders didn’t use Clinton’s Willie Sutton-like defense of accepting $675,00 from Goldman Sachs for three speeches (“that’s what they offered”) against her – MNBC’s Rachel Maddow had to bring it up. As Clinton repeatedly invoked unspecified “hedge-fund billionaires” vested in her political demise, Sanders passed on any mention of Clinton’s son-in-law who is a hedge-fund manager.

Making a quick buck is a Clinton family trait. Bill and Hillary have amassed over $25 million in speaking fees since 2014. Daughter Chelsea earned $600,000 annually as an NBC News “special correspondent" – by one estimate, she made about $26,724 for each minute she appeared on air (then again, probably a sore subject at a MSNBC-run debate).

But it ties to a larger point that will haunt Hillary come the general election: as with the server controversy, the Clintons have a penchant for cutting corners, offer strained justifications and live by a different set of standards and rules. It’s part of why voters struggle with Hillary’s trustworthiness, yet Sanders lacks the cutthroat skill to exploit it. Clinton’s lucky a more adroit rival’s not in this race.

In what may be a campaign first this election cycle, America was spared any talk of Donald Trump.

Trump wants a recount in Iowa, as do some Democrats. To its credit, MSNBC raised the topic – though it should have been in the debate’s opening moments, not 80 minutes later.

MSNBC missed the chance to press Sanders on whether he’ll endorse Clinton should she prevail.

She dodged a question about making him a running mate, but said Sanders would be her first courtesy call should she become the nominee.

Earlier this week, Gallup released this analysis finding that 20 U.S. states are “red” (solidly or leaning Republican) versus only 14 “blue” Democratic states. In 2009, Gallup painted 33 states blue and only five red.

As the two candidates argued over which one of them would be the more devoutly progressive after eight years of a decidedly liberal president, the irony was front and center – and to the left: Hillary or Bernie will win this Democratic battle.

Meanwhile, their party’s losing the war.