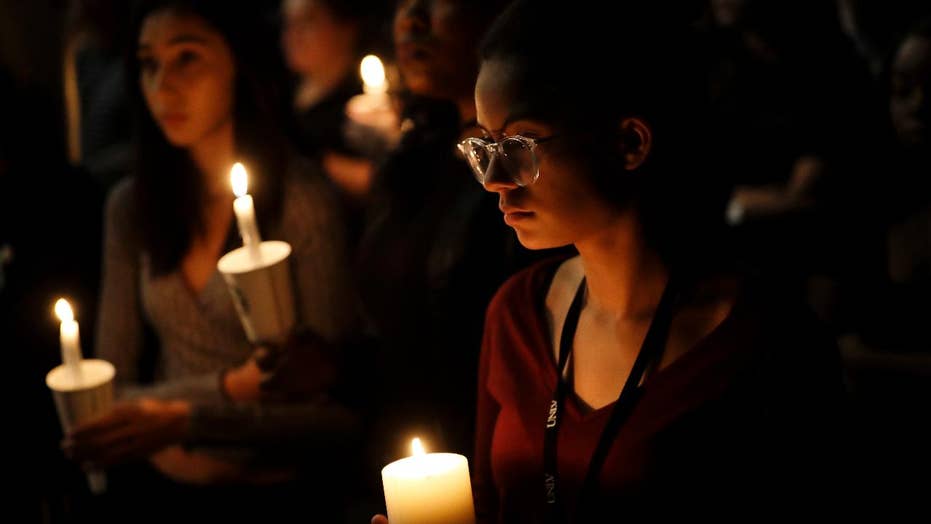 Pastor talks about healing during a crisis.

On Sunday night a shooter rained gunfire on 22,000 music fans along the Las Vegas Strip. The gunman, Stephen Paddock, fired from the 32nd floor of a Mandalay Bay Resort hotel, killing 58 people and wounding more than 500 others. Paddock’s motives are unknown.

Most importantly, we want to know what we should do in response. Let me suggest five things we can do as we are processing this tragedy.

First, we should weep with those who weep. When Jesus stood by Lazarus’ grave with Mary and Martha, he wept. He mourned the loss of Lazarus’ life and expressed sympathy for his loved ones. Similarly, we should mourn. We should express genuine love and concern, opening ourselves up to experience some of the sadness and grief experienced by the victims and their families.

Sit with people. Cry with them. Express sympathy for them. Take a moment to reflect on the horror of sin. Say to the person next to you, “I don’t know why this happened, but God is present with us even when we can’t see him, even in the midst of a tragedy like this. And we are promised that he will return one day to make things right, to rid the world of sin and its consequences.”

Second, pray for the victims, for civic leaders and for Las Vegas churches. Several times this year, social media flash mobs mocked evangelicals for saying we would pray in the aftermath shootings or other harrowing events. In their view, our tweets about prayer were simply a means of circumventing difficult issues instead of acting upon them. The Las Vegas shootings are no exception, with the #ThoughtsAndPrayers hashtag trending in a negative way after the shootings.

For our part, however, we’d turn the criticism around and say that prayer is a more powerful form of activism than social media flash mobbing. Our obedience to the biblical command to pray for our society is more important than the sum total of our Tweets or opinion pieces. So, as Ed Stetzer wrote this week, let’s determine to pray for the civic leaders, churches, and charities who are serving victims, family members, and communities in the aftermath of this horror.

Third, reject the speculations of self-appointed prophets. Often our neighbors and Facebook friends will reach out to us during moments like this, looking for a theological explanation or wanting to justify God’s goodness in light of such a horror. But the Bible doesn’t give easy or neat answers, so we shouldn’t either. We don’t know why God intervenes to stop some tragedies but doesn’t intervene in others. For that matter, we don’t know whether or not he intervened in this particular tragedy. What we do know is that God doesn’t sin but people do. Let’s stick to what we know.

We should be especially careful to dismiss the speculations of self-appointed prophets. It never fails that, after a terror act or natural disaster, some Christian leader will claim that the event is God’s judgment on a particular individual or nation or political faction. Yet, as Russell Moore wrote yesterday, “Jesus told us specifically not to do this, after his disciples asked whether a man’s blindness was the result of his or his parents’ sin. Jesus said no to both (Jn. 9:1-12). Those self-appointed prophets who would blame the victims for what befalls them are just that, self-appointed. We should listen to Jesus and to his apostles, not to them.”

Fourth, don’t try to score political points. Inevitably in the aftermath of terror incidents, political partisans try to score points. Let’s resist the temptation to join them in capitalizing on the tragedy. The time will come for debates about gun control and gun rights. But the week of the tragedy is not that time. So, during this time of mourning, let’s refuse to take cheap shots at people on the other side of the aisle whose policy views you think are harmful or foolish.

Fifth, point people to the day when Christ will return to make things right. During a time like this, people need to know that life is not a meaningless chaos. They need to know that God is at work even during a time of tragedy. In other words, they need us to be Christians, to be people who remind the world that God has promised to return one day to make things right.

As He told his disciples immediately after having been beaten, stabbed, and crucified, “I am with you always, even to the end of the age” (Mt. 28:20).

So, let’s remind the world that even—and especially—when it seems like the world is falling apart, Christ is present with us. And not only is he with us now, but he will be with us in the future when he returns to rid the world of tragedy once and for all.