Pentagon warns China likely training for strikes on US

Every year the Pentagon releases a report detailing how China’s military capabilities are growing deadlier and more technologically sophisticated. This year, the media jumped on the notion that China is likely training for bombing strikes against American targets and also strengthening its nuclear capabilities.

That sounds scary – but it’s just the tip of the iceberg.

In fact, China’s military has much bigger aspirations. Beijing has been preparing for decades for what seems almost impossible: an all-out war against America if relations were to take a turn for the worse or if Washington threatened what the Chinese leadership considers its core interests.

Since the mid-1980s, China has slowly rebuilt its armed forces for a struggle against America. The Chinese correctly predicting that the Soviet Union – while a threat at the time – was in decline, and that Washington would challenge any move by Beijing to dominate Asia. 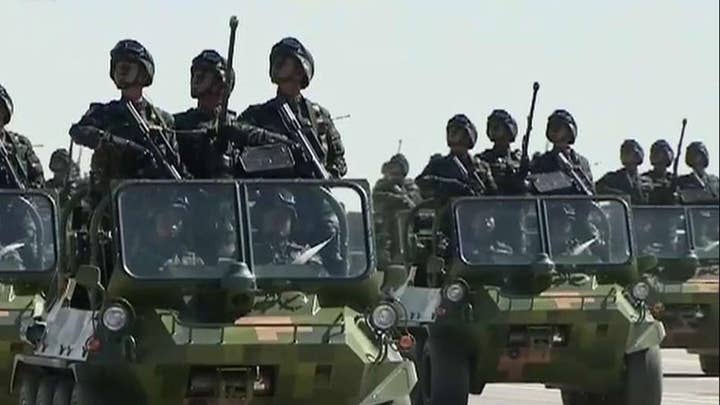 From China’s perspective, events have proven that its leaders made the right decision. In the mid-1990s, Washington and Beijing clashed over Taiwan in an incident that was quite embarrassing for China. As the U.S. Navy deployed aircraft carrier battlegroups to the region, China had no way to respond. In fact, China could not even reliably locate the American naval vessels in the region, ensuring military defeat if war had come.

Fast forward to 2001, when a U.S. spy plane and Chinese fighter collided off the coast of China in international airspace. Beijing, once again, had few military options to respond if the incident had turned into an armed confrontation.

How times have changed. Thanks to hundreds of billions of dollars spent on a modernized military that is ready for war against any opponent on land, sea, air, space or cyberspace, China would clearly give America a run for its money in any sort of conflict today. Some scholars have even offered scenarios in which Beijing would come out on top.

Perhaps the centerpiece of China’s efforts is a multi-decade effort to develop technologies and weapons platforms to mount a strong and effective military response if the U.S. attempts to access areas near Taiwan, the South or East China Seas, or along China’s coast.

Going by the name Anti-Access/Area-Denial, Beijing has determined the best way to win a war against America is to fight asymmetrically – or deter Washington from ever fighting in the first place.

By building stealthy submarines that are hard to detect – along with tens of thousands of sea mines, and thousands of ballistic and cruise missiles – China wants to guarantee that any attempt by America to attack or militarily deter Beijing would be met with an overwhelming response.

China’s strategy attempts to place at risk our most prized military assets: our Navy and specifically our aircraft carriers. To do this, Beijing has developed a weapon that has gained a near mythical status in the defense community over the last decade. Known as the “carrier-killer missile,” or DF-21D, Beijing has created a weapon that could, at least in theory, attack a naval vessel on the open ocean as far away as 1,000 miles.

And even more terrifying, China has already deployed a more advanced version of the missile that could strike a ship as far away as Guam. This missile could also carry a nuclear weapon to attack land targets. You can even see how effective these weapons are, because they have been tested extensively over the last few years.

The good news, if there is any when it comes to the potential of a U.S.-China war, is that America has been preparing for China’s growing military might for at least a decade. The Trump administration thankfully understands the challenge and has responded quite aggressively.

First and foremost, Team Trump has not been shy about warning the public and allies about China’s growing military power. Specifically, the U.S. is calling out Beijing’s abilities in multiple administration policy documents such as the National Security Strategy, stating in no uncertain terms that “China seeks to displace the United States in the Indo-Pacific region.”

While this might seem obvious, such actions help create general awareness of the problem in the media and outside of the Beltway, making sure the public is conscious of the issue and demands something be done about it.

Also, knowing that Obama era cuts in military spending not only hurt overall readiness but the simple ability of our forces to train against threats like China, President Trump has aggressively expanded our military budget, with a big focus on naval power and missile defenses.

This expansion ensures that our warfighters not only have the equipment and training they need, but can match-up with the Chinese in military domains where they are growing strongest.

And while some so-called experts think the idea of a Space Force proposed by President Trump is silly, a clear focus on warfare in this emerging domain is clearly important. This is especially true considering how Beijing is developing weapons to destroy U.S. satellites – to make sure we would be militarily blinded if war ever came.

But there is much more that needs to be done. Going forward, the Trump administration must work with likeminded nations in the Asia-Pacific and broader Indo-Pacific region to ensure that China can never use the possible threat of military force to bend other nations to its will.

America should help nations like Taiwan, for example – whose very existence is under threat thanks to Beijing’s aggressive efforts – to gain access to all the military hardware they can, like the F-35 fighter.

If our allies and partners enhance their own defensive capabilities, China might think twice about trying to threaten military force in a crisis or trying to bully its neighbors, as it has done in the past. Clearly, peace through strength is not just a smart choice for America, but for our friends in Asia as well.

The U.S. knows how to confront, contain and outcompete any nation that thinks its own rise should come at the expense of others. The Chinese Communist Party leadership should read up on recent history, and specifically what happened to the Soviet Union. When America is united behind a single foreign policy objective, well, as they say, the rest is history.