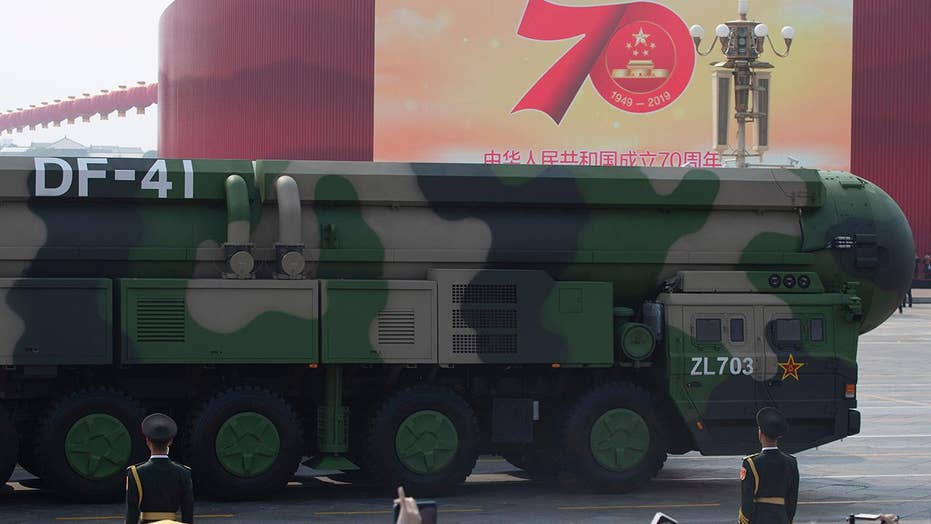 In Beijing, they are partying like it’s 1949. And there’s no better way to celebrate the 70th Anniversary of the Chinese Communist Party than with a massive military parade and a speech by President Xi Jinping.

Certainly the party has reasons to party. They control everything: the government, the armed forces, and the economy. They rule over a country that stands as a world-class diplomatic and economic power and a rising military one.

On the other hand, the party faces some rising problems, too. Here are the top five.

ROGER ZAKHEIM: US MUST FOCUS MORE ON ECONOMIC AND MILITARY CHALLENGES POSES BY CHINA

Wreaking havoc in Hong Kong. Months of protests and rioting continue, with no signs of stopping. To explain the discontent, Beijing is pushing a new line: The cries for freedom, it seems, are rooted in the high-cost of housing.

There is no doubt that steep housing costs weigh heavily on the younger generation, but that’s not what has brought people to the streets and kept them there. The protests are rooted firmly in the legitimate fear that Beijing’s heavy hand will encroach on their political and economic freedom.

The Hong Kong protests have sullied China’s brand. The regime continues to undermine the integrity of the Basic Law, which requires Beijing to respect the freedoms of the Hong Kong people. Every day of protest reminds the world that China doesn’t keep its promises.

Oppressing the Uyghurs. The party has thrown a million members of this Muslim minority community into heavily guarded camps. A million! This brutal treatment places China among the globe’s leading oppressors of religious liberty and other human rights.

Hijacking the U.N. Human rights abuse wasn’t the only charge leveled at Beijing at the General Assembly meeting. Many are waking up to the fact, that the Chinese Communist Party has been systematically placing its people in U.N. organizations with the express purpose of bending the agencies to advance China’s preferred polices.

Letting the Mask Slip from the BRI. China sold its Belt and Road Initiative (BRI) as Beijing’s gift to the world — a way to help others share in China’s prosperity. That narrative is wearing thin. Increasingly, BRI looks like economic imperialism.

Alarmed, more and more countries are blocking BRI investments. Others are looking to counter balance Chinese presence by increasing U.S., European, and Japanese investments in their countries.

And it’s not just BRI that has made the world suspicious of Chinese economic activity. Corporations like the telecom giant Huawei are increasingly viewed as instruments of Chinese power, not just benign global companies that sell stuff cheap.

The Communist Chinese Party has no one but itself to blame for sullying the reputation of Chinese economic activity. Rather than introduce an alternative to the free market system, all they have done is demonstrate how to be the world’s biggest global cheat, exploiting the markets through intellectual property theft, corruption, unfair trading practices and non-tariff barriers.

China’s economic growth has been slowing down. Despite two decades of increased trade and investment, China’s economic development will plateau before ever reaching high-income status. With an aging population, significant amounts of debt, and few economic allies, China’s economy is in severe need of reform.

Put another way, the Communist Party’s economic policies are running out of runway. They won’t be able to steal, cheat, and bully their way to a world-class economy. That means China will have to make some hard choices in the not-too-distant future.

They won’t be able to meet the rising expectations of their citizens, continue to fund a military build-up to threaten the U.S. presence in the Indo-Pacific, and pay for all their global meddling. Something has to give. And, ultimately, if they want to keep their economy growing, they will have to adopt the free market reforms and fair practices the party has been actively suppressing.

Let the regime parade and party all they want. But if the party rules for the next 70 years like they govern now, its members will wind up with a massive hangover and the sad realization that they have fewer friends, less wealth and less power.