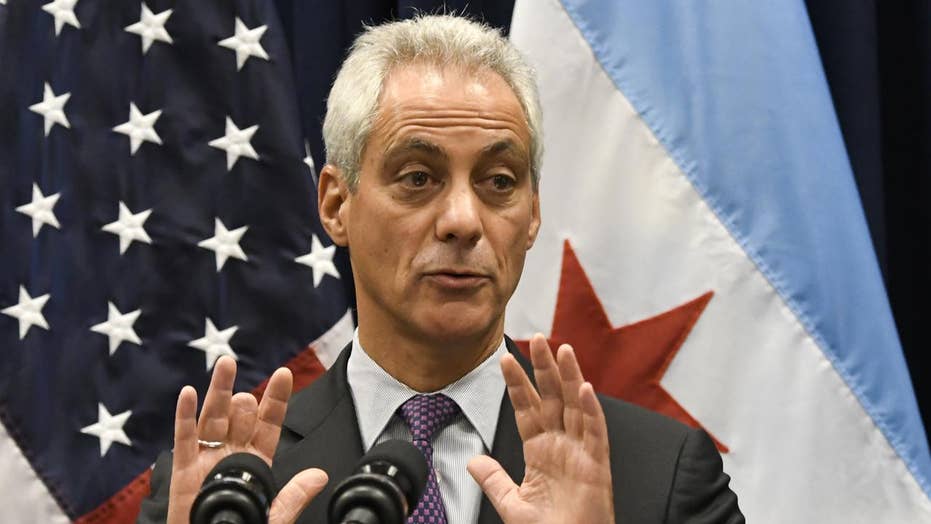 Chicago is plagued with violent crime. It suffered nearly 800 homicides last year, and that’s only part of the picture. So why is Mayor Rahm Emanuel fighting so hard to make sure that immigration authorities don’t pick up and deport criminal illegal aliens from his not-so-fair city?

Emanuel announced last weekend that Chicago would sue the Department of Justice over its guidelines concerning sanctuary cities and federal grant money.  On Monday, the city did just that.

What’s Emanuel upset about? On July 24, Attorney General Jeff Sessions made it clear that if cities want to receive discretionary Justice Department grants intended to fight crime and improve local law enforcement, they must demonstrate that they are interested in fighting crime, not in obstructing enforcement of federal law--including immigration laws.

Specifically, Sessions’ memo states that only cities that “comply with federal law, allow federal immigration access to detention facilities, and provide 48 hours’ notice before they release an illegal alien wanted by federal authorities” will be eligible for the Edward Byrne Memorial Justice Assistance Grant Program. Last year, Chicago received a $2.3 million grant through this program.

As Sessions noted, the so-called sanctuary policies of cities like Chicago “make all of us less safe because they intentionally undermine our laws and protect illegal aliens who have committed crimes.”   In fact, such policies “encourage illegal immigration and even human trafficking by perpetuating the lie that in certain cities, illegal aliens can live outside the law,” according to Sessions.

Why would Emanuel even want to keep criminal aliens on the already mean streets of Chicago?  One 2005 Government Accountability Office (GAO) study of 55,322 criminal aliens found that they had been arrested 459,614 times and committed almost 700,000 criminal offenses—an average of 13 offenses per illegal alien.  The crimes included everything from murder to robbery to sex-related assaults.

A 2011 GAO report told a similar sad story. Reviewing the records of 251,000 criminal aliens in federal, state, and local prisons and jails, it found they had been arrested nearly 1.7 million times for close to three million criminal offenses.

Had these offenders not been in the country, their victims would have been spared much suffering.  Or if cities and states had notified Washington that they were about to release these repeat offenders, the feds could have picked them up and removed them from the country.

The sanctuary policies championed by Rahm Emanuel make that impossible. Yet he arrogantly boasts that Chicago will not be “blackmailed into changing our values.”

The “value” he seeks to uphold is the self-proclaimed right to flout federal law to protect known predators.  Only the most twisted logic could equate withholding federal agency grants from a city that refuses to allow the federal agency to do its job to some form of blackmail.

Emanuel’s lawsuit makes the false argument that the federal government would “force the City to detain individuals longer than justified by probable cause, solely to permit federal officials to investigate their immigration status.”  In fact, the Justice Department is simply asking the city to give the federal government 48 hours’ notice of its intent to release a criminal alien. That will give the feds time to pick up the offender.

The lawsuit also claims without foundation that this new DOJ memo “effectively federalizes” local detention facilities because it requires the city to give “federal immigration officials access to local police stations and law enforcement facilities in order to interrogate any suspected noncitizens held there.”

Giving federal authorities access to criminals in custody in no way “federalizes” local detention facilities.  Under that absurd claim, local police and sheriffs would have to bar FBI agents and all federal law enforcement officers from interviewing prisoners in their facilities who are suspected of committing federal crimes.

The city’s lawsuit demands that the federal court stop the Justice Department from imposing these “unlawful and counterproductive conditions” on applying for a DOJ grant.  But if Chicago doesn’t like these conditions, it should not apply for the money.  To say there is any substance to this lawsuit is to give it too much credit.

In talking about the lawsuit, Rahm Emanuel misleadingly conflated legal immigrants with illegal immigrants, a common tactic of the left.  Emanuel said, “Half the patents at the University of Illinois come from immigrants, and so we want to continue to welcome people, welcome their ideas, welcome their families to the city of Chicago, who want to build the American dream for their children and their grandchildren.”

There is no question that immigrants over many generations have made great contributions to, and have had lasting impacts on, American society. But contrary to the mayor’s narrative, that is wholly irrelevant to the discussion at hand. ICE is not going after legal immigrants. And the grant requirements that he is fighting concern only illegal aliens already in jail for committing crimes on top of entering the country illegally.