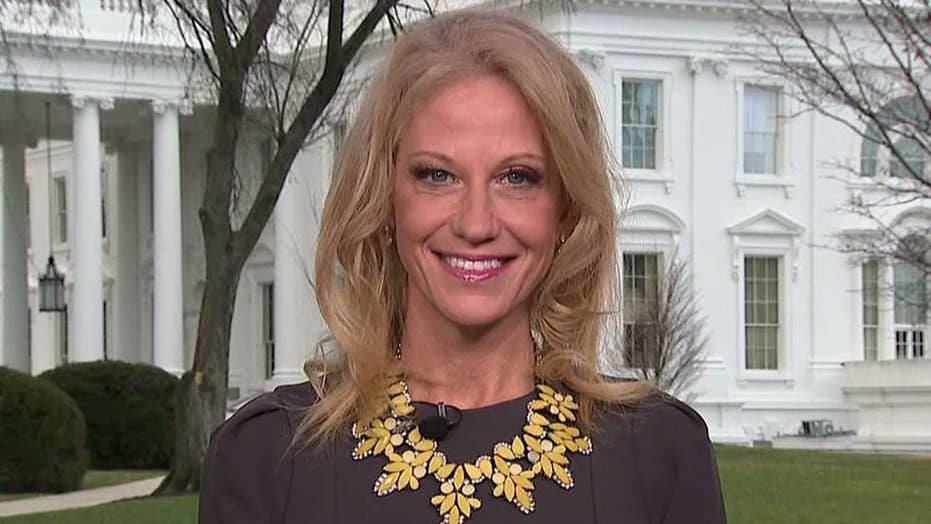 Conway: Trump took his case on border security directly to the American people, many hearing it for the first time

Counselor to the president Kellyanne Conway says that President Trump sees the issues at the southern border as a humanitarian crisis.

Tuesday night President Donald Trump made his first national prime-time address from the Oval Office. It was a direct message to the American people about the urgent need for $5.7 billion in funding for a barrier on our southern border. He had to face the nation because Democrats have refused to provide the funding, and thereby have partially shut down the government.

The confrontation has spawned a full-frontal assault of propaganda from the mainstream media, and a continuous flow of lies and disingenuous claims from Democratic politicians.

As has been the case since his election, it seems as though our president is all alone out there fighting this fight. But he must not forget that this wall was the original and driving force behind his supporters’ loyalty to him in the first place. And he must keep fighting for it.

There are a couple of different ways to look at this epic clash. The first is through a political lens; the second is through the lens of leadership.

Regarding the political, President Trump has the Democrats in a position they are not accustomed to – the defensive.

Tuesday night’s Democratic response to the president, delivered by House Speaker Nancy Pelosi and Senate Minority Leader Chuck Schumer, was a classic example of Democrats trying to explain how they are for border security, but simultaneously against securing the border. It also showed how anxious they are to spend our taxpayer money on all their favorite programs, but unwilling to spend $5 billion on border security.

“The president has chosen fear. We want to start with the facts. The fact is, on the very first day of this Congress, House Democrats passed Senate Republican legislation to reopen government and fund smart, effective border security solutions … The fact is, President Trump has chosen to hold hostage critical services for the health, safety and well-being of the American people and withhold the paychecks of 800,000 innocent workers across the nation — many of them veterans … The fact is, we all agree that we need to secure our borders, while honoring our values.”

Interesting to note Speaker Pelosi’s concern for “facts” when just last week she interrupted Homeland Security Secretary Kirstjen Nielsen during a report to Congress by saying “I reject your facts.”

But back to Tuesday night. How about this from Senator Schumer:

“President Trump has appealed to fear, not facts; division, not unity. Make no mistake – Democrats and the president both want stronger border security … There is no excuse for hurting millions of Americans over a policy difference. Federal workers are about to miss a paycheck. Some families can’t get a mortgage to buy a new home … Mr. President, reopen the government and we can work to resolve our differences over border security.”

The president has placed the Democrats in an uncomfortable political position – one which past Republican presidents have been too intimidated by the media to create. He is essentially forcing them to say: We support border security and we support reopening the entire federal government, but we don’t support border security enough to take action to reopen the entire federal government.

So politically, the president has them. But he also has them on the matters of leadership and courage and taking action that is right and just in this moment.

The great political philosophy debate over the centuries has been between the idealism of Plato and the realism of Machiavelli. In our times this translates to the debate between the aspirational and the pragmatic.

While it might be aspirational, especially for freedom-loving people like me, to believe that America – the greatest and freest nation of all time – should welcome all those who wish to enter so that they might enjoy the gifts of this land, it simply isn’t pragmatic.

We live in a welfare state society – one that is already bloated and overburdened. We cannot continue to absorb and support an endless stream of people who will inevitably need legal residents to subsidize their lives.

Furthermore, we live in a very dangerous world where we fear not only the entry of deliberate terrorist elements but also the entry of proven criminals and those not readily able to fend for themselves and who might, therefore, turn to crime as a means to survive.

The president was spot on Tuesday night when he spoke about the violence and drug crimes happening along our southern border. The Heritage Foundation has done a masterful job fact-checking the president on those points. Crime associated with our border is a serious threat to the general welfare of real citizens, and after all, isn’t it the general welfare of citizens that the Constitution calls upon government to promote?

In this moment, in this case, Machiavelli wins. Pragmatism wins.

The United States has been turned into a mindless true-false test, instead of the complex essay exam, it should be. You are either for open borders, or you are racist and anti-immigration. It just doesn’t work that way. I couldn’t be more pro-immigration. I want people to come here legally and enjoy and contribute to this great American experiment.

But I also want a wall. So do the other voters who supported the president during the election, or have since come around to his position. That base of people is firmly behind him in this shutdown fight.