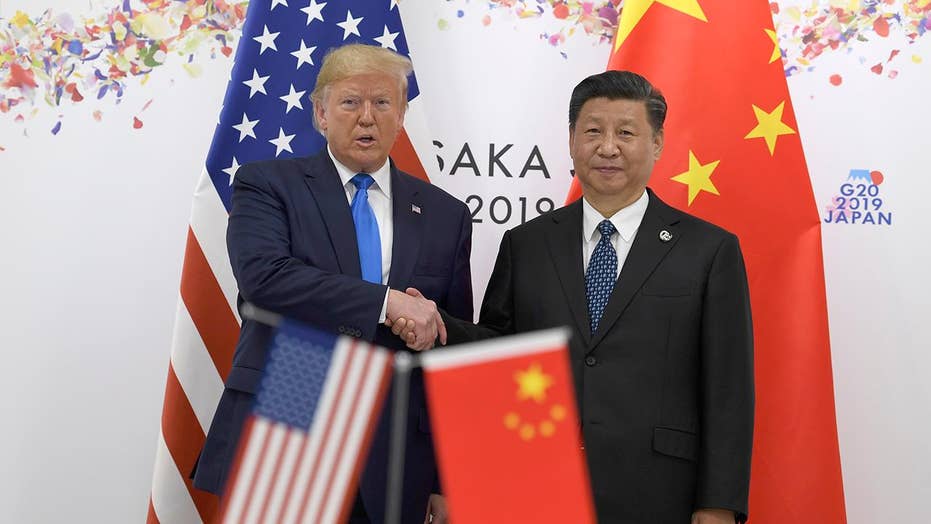 China is using tariffs to try to create regime change in US: Curtis Ellis

While President Trump lashed out in tweets Friday criticizing both Federal Reserve Chairman Jerome Powell and Chinese President Xi Jinping, there is only one focus that is truly an issue, and the resolution is entirely under Trump’s control. That’s China – not the Fed.

After the stock market closed, the president tweeted that he would again raise tariffs against China, escalating the trade war between the two nations.

The Trump tweet came after China announced several hours earlier that is would increase tariffs on $75 billion in imports from the U.S.

The president’s attack on China followed his Twitter attack earlier in the day on Fed Chairman Powell for failing to lower interest rates as a way of strengthening the economy, as Trump has demanded.

“As usual, the Fed did NOTHING!” the president tweeted. “It is incredible that they can ‘speak’ without knowing or asking what I am doing, which will be announced shortly. We have a very strong dollar and a very weak Fed. I will work ‘brilliantly’ with both, and the U.S. will do great... My only question is, who is our bigger enemy, Jay Powell or Chairman Xi?”

While Trump has been a vocal advocate for lower interest rates, any lowering of interest rates would have little to no effect on the broader economy. However, it would come at the expense of future monetary policy tools that might be needed if our economy goes into a recession and would further inflate assets.

Think of it this way: When the Federal Reserve lowers interest rates, it is supposed to juice demand for investment. However, after years of incredibly low interest rates and still historically low rates today, investment demand from consumers and businesses alike is not being held back by interest rates.

China, on the other hand, presents a bigger issue. China’s announcement of retaliatory tariffs was countered with Trump’s tweet about President Xi being an “enemy” – an escalation of language that culturally creates a barrier to get negotiations back on track.

Now, with the Trump’s tweet Friday night that he is responding to the Chinese tariffs with higher tariffs on Chinese goods above what was already planned, he is creating a real barrier to investment demand.

Trade wars are long and hard. While small and positive developments are welcome, the disintegration we witnessed Friday is a disaster that sent the Dow into a tailspin.

Trade uncertainty makes planning nearly impossible for businesses that source products or components in China, sell to China, or are just worried about the international fallout from the ongoing U.S.-China trade war. The dispute also doesn’t help to spur business confidence in making significant investments.

While the president has called on U.S. companies to get out of China entirely, this is an impractical request for large and small businesses alike.

This uncertainty cycles through both the economy and the stock market, as today’s sentiment becomes tomorrow’s reality.

While the president has called on U.S. companies to get out of China entirely, this is an impractical request for large and small businesses alike.

Other developing countries like Vietnam and India don’t have the infrastructure in place and also have weak corporate governance, intellectual property rights and other challenges that make them no better partners than China – or at least an unrealistic alternative today.

Not to mention that the U.S. benefits by having access to China – a huge market with nearly 1.5 billion people. Cutting that off is not helpful to our future prosperity.

Tariffs have been a tool of choice for Trump in other situations where there is pressure – for example, his tariff threats against Mexico related not to trade but to the illegal immigration crisis. So no one knows if the president could start a new trade war at the drop of a tweet – increasing uncertainty in the business community and stock market.

While we need a president who is tough on China, the tariff route Trump is pursuing is headed toward a dangerous line he may not be able to pull back from.

If investment is held off for too long, consumer and business sentiment becomes self-fulfilling and we enter a recession that we cannot get out of. That is not the fault of Jerome Powell. The responsibility rests squarely with President Trump.

The president can get our economy back on track by resolving the tariff situation with China and working to strengthen ties with U.S. allies to create a unified front to resolve disputes we and other nations have with China regarding intellectual property, investment and other issues.

For example, America and our allies could agree to not enforce Chinese company patents and other intellectual property protections, limit investment in China, and use the same tactics China uses against us. This would put pressure on China without it directly impacting the U.S. economy and stock market.

As the markets hope for some trade peace, buckle up for more crazy times. The best thing President Trump can do now is to seek stability and a unified front with our allies in dealing with China – something he would be wise to bring up at the G-7 summit with allied nations this weekend.