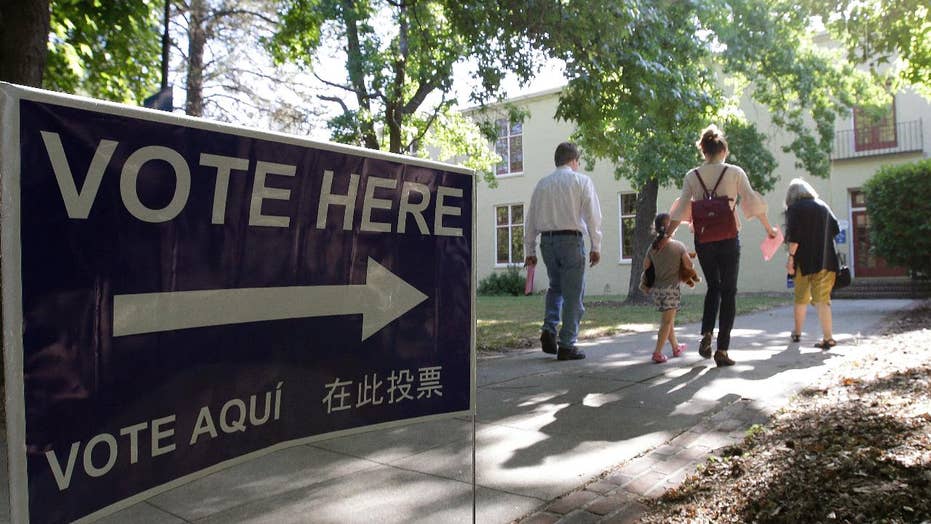 On a busy night of elections, voting took place in Alabama, Mississippi, New Mexico, New Jersey, South Dakota, Iowa and Montana. Here’s a look at some of the biggest takeaways.

Neither party managed to land any knockout blows in California Tuesday as voters went to the polls there and in seven other states to pick candidates who will face off in the Nov. 6 midterm elections, when control of the U.S. House and Senate will be up for grabs.

The fate of President Trump’s legislative priorities will hang in the balance in November. Right now Republicans control both the House and Senate, but a swing of just 23 seats would give Democrats a House majority. The GOP holds a narrow majority of 51 seats in the Senate, with Democrats controlling 47 seats and independents who caucus with Democrats holding two seats.

California, home to the nation’s largest congressional delegation with 39 Democrats and 14 Republicans, has a so-called “jungle primary.” All candidates initially competed on a single ballot Tuesday. The two who come out on top go on to the general election, regardless of political party. This makes it possible for two Democrats or two Republicans to face each other in November.

The Democrats had hoped the jungle primary might give them a leg up on their campaign to win back control of the U.S. House of Representatives by capturing at least a few of the 14 seats the GOP currently holds in California – half of which Hillary Clinton carried in the 2016 presidential contest.

What analysts have missed all over the country is that while the Democrats are able to maintain political power in places like the Golden State, they’ve not be able to stop the state’s slide into economic and social oblivion.

Going into Tuesday it looked like there might be a few seats – notably the Anaheim-area seat of retiring Republican Ed Royce – where the Republicans might be shut out of the general election.

That appears not to have happened – not in the Royce seat, not in the San Diego-area seat of retiring GOP Rep. Darrell Issa, and not in Huntington Beach where Republican Dana Rohrabacher, a former speechwriter for President Reagan seeking a 16th term, easily made it into the next round.

The failure to achieve what some were calling a “big, blue shutout” also didn’t extend to the gubernatorial contest. Democratic Lt. Gov. Gavin Newsom easily advanced to the second round of balloting as did Republican businessman John Cox, who had the endorsement of President Trump.

Former Los Angeles Mayor Antonio Villaraigosa – whom some hoped might make it into the runoff in place of Cox, setting up an all-Democratic general election contest that could have had a depressive affect on GOP turnout statewide – drew only about half as much support as Cox and finished a distant third.

This is quite a turnaround from what people were expecting even just months ago. The Trump presidency, in the considered opinion of some political experts, should have been the final nail in the coffin of the once robust, Reagan-producing, California GOP.

It might still. The latest figures show there are more voters in the state who’ve chosen to register as unaffiliated than who signed up as Republicans, with people blaming everything from the national party’s stance on immigration and abortion to the Trump tweets for the GOP’s weakness.

What analysts have missed all over the country is that while the Democrats are able to maintain political power in places like the Golden State, they’ve not be able to stop the state’s slide into economic and social oblivion.

Another factor is President Trump himself. His national approval numbers in polls have risen to a point somewhere in the mid-to-upper 40s, much higher than many analysts thought and most Democrats believed he’d ever be.

That means the suburban, college-educated, mostly white, Republican married women who appeared to desert Trump in droves in November 2016 (and who either voted for Clinton or just didn’t vote) may be starting to come home to the GOP, at least as far as voting for other Republicans is concerned.

This analysis is supported by two other figures, both of which presage a competitive, perhaps even victorious national GOP effort in the fall. The Real Clear Politics average has nearly 40 percent of those surveyed saying the country is “on the right track.” That’s about 13 points better than what it was during President Obama’s last year in the White House.

The number of people who say America is “headed in the wrong direction” is also down by about a third from where it was at the end of the Obama era.

That’s not a ringing endorsement for things as they are, but it does suggest the next national election will not be a “change” election like the last one was. Voters seem to like their tax cut and approve of the fact the country’s economic engine has restarted.

People are going back to work, the unemployment rate among all Americans is the lowest in decades and the black and Latino unemployment rates have never been this low since statistics have been compiled.

All that news helps incumbents, which this year means the GOP. The generic ballot test, where voters are asked whether they intend to vote for a Republican or a Democrat in the next election, is now just about even. Several months ago, before the tax cut passed and in the thick of unending daily chaos coming out of the White House, the Democrats had a double-digit advantage.

All this carries over into other states that held primaries on Tuesday. This was true in places like New Jersey, where the president has problems, and in the “Trump Country” states of South Dakota, Alabama and Montana.

Alabama interim GOP Gov. Kay Ivey – who took office upon the resignation of her Republican predecessor – easily won nomination for her own term. She goes into the general election a heavy favorite against Democrat Walt Maddox.

In the closely watched Republican primary in the state’s 2nd District, which runs from Dothan and the Gulf Coast up to the suburbs of Montgomery, incumbent Martha Roby – who upset some Republican voters after she condemned President Trump for his “Access Hollywood” tape – was forced into a runoff against the man she beat when first elected, former Democrat turned Republican Bobby Bright.

In Iowa, interim Republican Gov. Kim Reynolds – who replaced Terry Branstad as governor when President Trump appointed Branstad U.S. ambassador to China – ran unopposed for the GOP gubernatorial nomination and is a heavy favorite to win a term on her own.

The Hawkeye State has no U.S. Senate race this year. Only one of the state’s four incumbent House members – Republican Steve King – is considered safe. GOP incumbents David Young in the 3rd District (in the southwestern corner of the state) and Rod Blum (in northeastern Iowa’s 1st District) may have tough contests in the fall, even though both were unopposed in the primary.

In the 2nd District, which is in the southeastern part of the state and includes Iowa City, Democrat Dave Loebsack – who, like his Republican general election challenger Chris Peters ran unopposed it the primary – will have to contest with an electorate that sent him to Washington for sixth time, while Donald Trump carried for the district by just over 4 points.

Mississippi has two U.S. Senate seats to be decided in November, but only the seat held by Republican Roger Wicker was affected by Tuesday’s primary. Wicker easily prevailed in his primary and enters the race favored to win against either Democrats Howard Sherman or David Baria, who will fight it out in a runoff election later this year.

The contest for the seat that came vacant upon the retirement of longtime Republican U.S. Sen. Thad Cochran will be decided at a later date.

In Montana, state Auditor Matt Rosendale emerged from a field of four to win outright the chance to take on two-term incumbent Democrat Jon Tester in the race for U.S. Senate.

President Trump carried the state in 2016 by more than 200,000 votes and has singled out Tester as someone he’d like to see replaced. But Tester’s numbers are good. Absentee balloting and turnout in the primary were both high, meaning voter enthusiasm may be carrying forward from the last election to the next.

Menendez may be tainted by ethics problems that should render him vulnerable, but the state GOP is still in disarray after the drubbing it took in last year’s gubernatorial elections. It also doesn’t help that there are at least 10 seats in the U.S. Senate currently held by Democrats that are just better targets.

The Garden State is also home to two seats which went one way for Congress and the opposite way for president in 2016. In one, the 5th District, which sits like a cap across most of the top of the state, Trump beat Hillary Clinton by a single point while Democrat Josh Gottheimer was picked to go to Congress. This time Gottheimer will face Republican John McCann, who won the GOP primary 53 to 47 percent.

In the 7th District in 2016, Republican Leonard Lance won his seat on the Pennsylvania side of the state by 11 points, as Clinton was carrying it 48.6 to 47.5 percent. In November he’ll face Democrat Tom Malinowski.

These seats are on the watch list kept by both parties, at least for now, as is northern New Jersey’s open 11th Congressional District. That’s a longtime GOP stronghold where voters picked former state Republican Chairman Jay Webber and Democrat Mikie Sherrill as the nominees for November.

In New Mexico, Republican Rep. Steve Pearce from the 2nd Congressional District, which covers the southern half of the state, and Democrat Rep. Michelle Lujan Grisham from the Albuquerque-centered 1st District will face one another in the fall contest to replace term-limited GOP Gov. Susanna Martinez, the nation’s only currently serving Hispanic chief executive.

The seats Lujan Grisham and Pearce are vacating are reliably partisan, so the outcome of the congressional primaries will likely determine who the winner will be in November. The U.S. Senate race, where Democrat Martin Heinrich is seeking a second term, is not expected to develop into much of a contest.

Finally, in South Dakota, GOP voters picked Republican Kristi Noem, the state’s lone member of the U.S. House of Representatives as their candidate for governor. Noem easily defeated state Attorney General Marty Jackley in a race that started ugly and ended even uglier. If elected she would become the state’s first woman governor.

Democrat Billie Sutton ran unopposed for his party’s nomination for governor, as did the party’s congressional candidate, Tim Bjorkman. Looking to replace Noem in the House is Republican Dusty Johnson, who starts the race a prohibitive favorite, given Trump carried the state by better than 30 points and 100,000 votes in 2016.