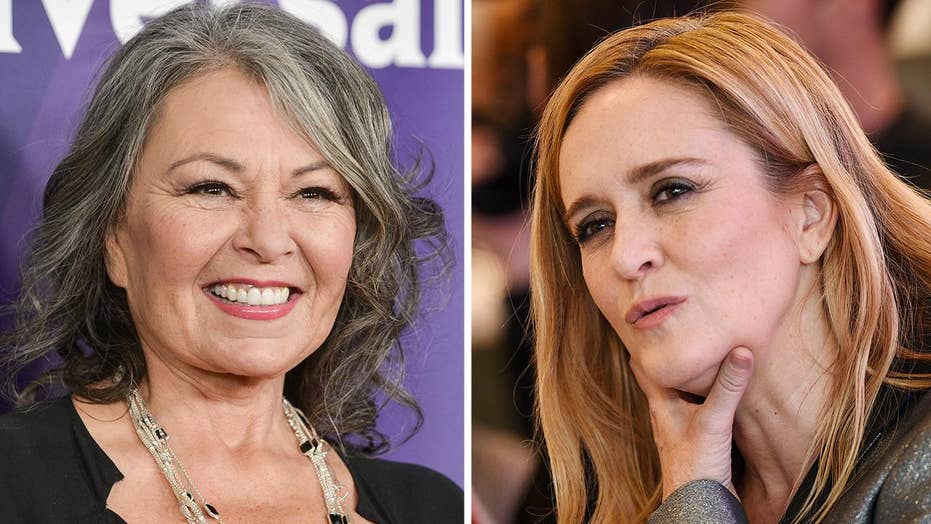 Both comedians apologized both so far only one has lost her television show; reaction from Fox News contributor Ellen Ratner and Larry O'Connor, opinion editor at The Washington Times.

We’ve come a long way from harmless playground jibes like “your mother wears combat boots,” to those of today from the likes of Samantha Bee and other leftist “entertainers” who say things about President Trump and his family that are so vulgar they can’t be printed in a newspaper or quoted on television.

Some of President Trump’s critics blame his harsh rhetoric for the language they use to attack him. Perhaps he bears some responsibility, but that is poor justification for bad behavior from others who might set a better example. People of a certain age may recall what their mothers told them: “If Johnny’s mother told you to jump off a building, would you do it?”

While setting a good example would be a better way to go, some liberals appear to feel so threatened that their failed ideology is being exposed, that all they can do in response to the president is haul out hateful retorts. When you are losing on issues, the last stop is name-calling.

The right is not immune to this horrendous behavior either, as evidenced by the crass, sexist, violent vitriol Trump supporters hurled at Hillary Clinton during the 2016 presidential campaign. It has to stop.

Does anyone seriously believe any Republican president, including one who used the King’s English in ways acceptable to polite company, would be free of harsh rhetoric from the left? Remember “Death of a President,” a movie about the imagined assassination of President George W. Bush? Bush endured many pointed slurs during his presidency. Ditto Ronald Reagan.

Among other examples of disgusting labeling and rhetoric is one from Google, which listed “Nazism” as the ideology of the California Republican Party. That posting came less than a week before the California primary.

The double standard applied to entertainers who insult the president and those who support him became glaringly evident in the differing responses to Roseanne Barr’s racist tweet about former Obama aide Valerie Jarrett and Bee’s vulgarity against Ivanka Trump, for which she was eventually forced to tender an apology. As New York Times reporter John Koblin wrote: “The different consequences for the two politically minded entertainers — Ms. Barr is an outspoken supporter of the president, while Ms. Bee is a full-throated opponent of the Trump administration — provided conservatives with a fresh opportunity to accuse the media industry of having a liberal bias.”

The president says he is still waiting for an apology from Disney CEO Bob Iger for insults directed at him by people on various ABC programs, insults that mocked Christianity and accused the White House of supporting white supremacists, among other slurs.

Trump shouldn’t hold his breath waiting for that apology.

Among other examples of disgusting labeling and rhetoric is one from Google, which listed “Nazism” as the ideology of the California Republican Party. That posting came less than a week before the California primary. Google later told The Daily Caller News Foundation that it happened because sometimes “people vandalize public information sources, like Wikipedia, which can impact the information that appears in search.”

Two White House statements summed up the outrage over the increasing number of insults from the left. This from Press Secretary Sarah Huckabee Sanders, herself the target of recent attacks by supposed feminists about her personal appearance: “The language used by Samantha Bee … is vile and vicious. The collective silence by the left and its media allies is appalling. Her disgusting comments and show are not fit for broadcast, and executives at Time Warner and TBS must demonstrate that such explicit profanity about female members of this administration will not be condoned on its network.”

Stephanie Grisham, spokesperson for first lady Melania Trump, said: “The double standard is truly astounding. Time and again the Trump family and members of this administration are subjected to false reporting, hateful rhetoric and outrageous lies all in the name of freedom of speech or comedy, yet the mainstream media stays silent.”

As talk radio host Chris Plante is fond of saying, “If the left did not have double standards they would have no standards at all.”