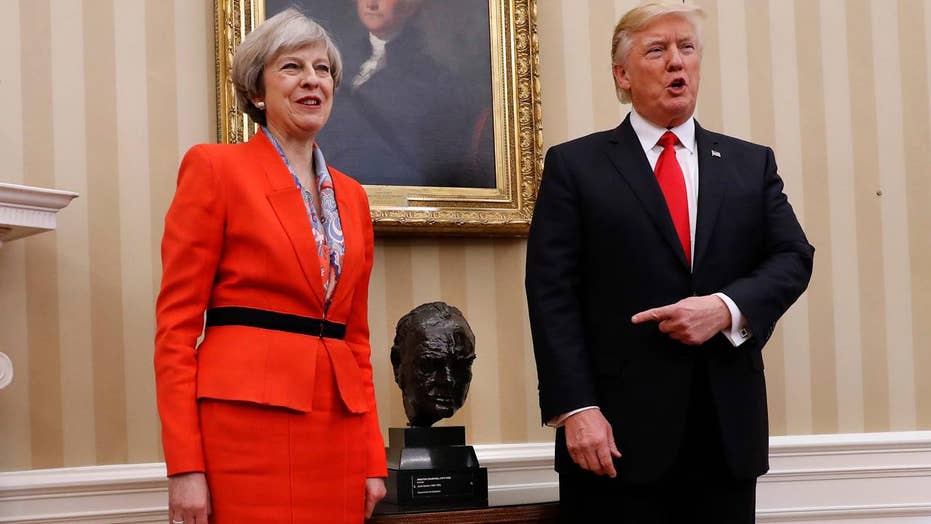 Trump: It's a great honor to have Winston Churchill back

President Trump meets with PM Theresa May in the White House

In September of 1939, Prime Minister Neville Chamberlain appointed Churchill as First Lord of the Admiralty for the War Cabinet. The message “WINSTON IS BACK” was signaled to all naval ships and installations announcing this appointment in which Churchill stepped back into a role he had held decades before.

President Trump has, for his part, signaled his own “WINSTON IS BACK” moment, by symbolically returning the bust of Churchill to the White House, that Obama sent back to the UK when he assumed office. Far beyond symbolism, Trump is signaling, with Prime Minister Theresa May, his own reset of the Special Anglo-American Relationship, and it couldn’t have come at a more propitious time.

Mrs. May arrived in the U.S. on Thursday, as the coveted first government head to officially visit the U.S., post-election.  This is a proud and promising moment for both leaders and one that bodes great potential for the nations they lead respectively and the partnership that they have expressed interest in resetting and strengthening.

Her introductory speech in Philadelphia was inspiring.  In it she tackled many of the issues foremost on the minds of Americans—threats from Islamic terrorism, cyber terrorism, our role within international organizations such as the U.N. and NATO.  She spoke of the opportunities for her nation and our own in a post-Brexit, outward-looking “Global Britain.”  She referenced the great friendship that was the apogee of the Special Relations—the Reagan-Thatcher friendship—and drew a parallel to their efforts to free the countries of Eastern Europe shackled by socialism, that Churchill identified as “the Iron Curtain.”  She ended this speech on a hopeful note that our better future is within reach and that we, Britain and America will build it together.  Mrs. May sets the tone for a greatly enhanced bi-lateral alliance, moving forward.

While the sheer global importance of the Special Relationship has historically transcended personalities, the last eight years have been challenging. President Obama’s approach of one global community, where Britain and other traditional allies enjoyed no special status, but were simply colleagues in the community of nations, challenged our strongest alliances.  Not to mention Obama’s intervention into the Brexit debate where he predicted a “back of the queue” position for the UK were it to leave the EU.

This attitude and approach must and likely will be altered. Judging by Mr. Trump’s statement during his inaugural address that the U.S. will “unite the civilized world against radical Islamic terrorism, which we will eradicate completely from the face of the earth,” it is clear that he intends to recommit to a traditional post-WWII role of ensuring stability. In order for the new administration to do so it needs a steady partner in the UK, a nation, unlike many of its European colleagues, that takes its military and financial obligations seriously.

In a world where ISIS is rampaging, mercilessly slaughtering innocents, with especial enmity towards Middle East Christians, America needs its allies more than ever – and America has no better ally than Great Britain. Britain needs America, too. From the First World War to the War on Terror, the world is safer when the Anglosphere is aligned and working harmoniously.

Indeed, the Brexit decision is part of a larger global re-asserting of national sovereignty and personal responsibility of nations, perhaps crowned by the election of Mr. Trump. Moreover, a central theme of this momentum includes direct trade negotiations and agreement between nations and will surely come to light as Mrs. May hopes to score a bi-lateral US-UK trade pact which would strengthen Britain’s unsure road as it leaves the EU.  It seems she has a willing ally in President Trump, for, as the London Times reported:  “Donald Trump will offer Britain a quick and “fair” trade deal with America within weeks of taking office to help make Brexit a “great thing.”’

There is good reason on both sides of the Atlantic to pursue this trade agreement. The figures alone are compelling: the US is the largest investor in the UK and bi-lateral trade mounts to nearly $187 billion. Furthermore, a strong US-UK agreement will be a powerful arrow in May’s quiver when she eventually must negotiate with Brussels.

The current Prime Minister has already spoken forcefully on this issue, “So as we rediscover our confidence together – as you renew your nation just as we renew ours – we have the opportunity, indeed the responsibility, to renew the special relationship for this new age. We have the opportunity to lead, together, again.”

Though history has moved on and so much has changed, the global importance of the Anglo-American partnership has endured and even increased. Churchill, first coined the phrase “Special Relationship,” as far back as 1946 in his “Sinews of Peace” speech at Fulton, Missouri, in which he explained: “…not only the growing friendship and mutual understanding between our two vast but kindred systems of society, but the continuance of the intimate relationship between our military advisers, leading to common study of potential dangers, the similarity of weapons and manuals of instructions, and to the interchange of officers and cadets…”

Seventy-five years hence, Theresa is here and ‘WINSTON IS BACK’ and is proving to be more relevant more inspirational than ever.

Amanda Bowman is founder of The Anglosphere Society. The Society's mission is to promote the Special Relationship between the United States and the United Kingdom across a broad spectrum.