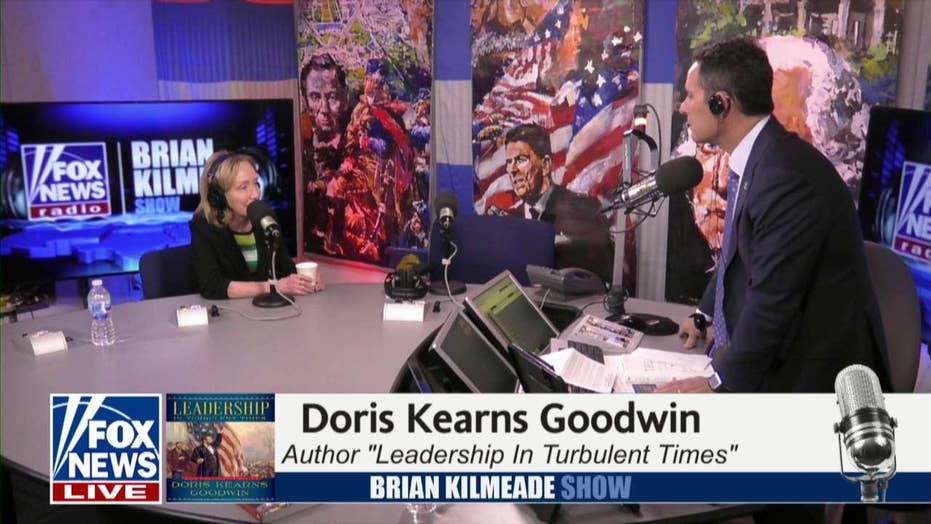 In our second season on the Fox Nation series "What Made America Great," we stop at a monument to possibly the most important and noble American who ever walked the Earth – President Abraham Lincoln.

Without Lincoln, the United States might not be united today. America might have broken into two nations, and maybe even more after that. But Lincoln held our nation together through the horrors of the Civil War that claimed somewhere between 620,000 and 850,000 lives – the deadliest war in our history.

YOU CAN WATCH "WHAT MADE AMERICA GREAT" EXCLUSIVELY ON FOX NATION. SIGN UP FOR YOUR FREE TRIAL NOW.

We emerged from that terrible war with staggering losses, but our wounds healed and we became one nation.

Thank Abraham Lincoln for forging our separate states into a single country.

And thank Lincoln for ending the immoral institution of slavery in America – where people were held as property because of the color of their skin, denied their basic human rights, treated as if they were farm animals who could be bought and sold. The achievement of ending slavery alone qualifies Lincoln as a great man who our changed history for the better.

You could spend a lifetime studying Lincoln. So what can we show our viewers and tell them that they don’t already know about this great man?

We decided to visit the Lincoln Memorial in Washington to find out.

Congress created a commission in 1867 – two years after Lincoln was assassinated – to erect a monument to our 16th president. But there was seemingly endless debate about the design and the cost – imagine, folks in Washington debating on and on and not getting anything done. So construction didn’t actually begin until 1914 and wasn’t completed until 1922.

How do you adequately show respect for a humble man who changed the course of American history and generations of Americans? Ultimately, the designers and workers who built the memorial created a structure that looks like it always belonged on the famed National Mall.

When you watch our episode on Fox Nation, the Lincoln Memorial will come to life. I will bring you to a place few people have gone before, which one day could very well be open to the public.

So much thought went into the memorial’s construction that wherever you look you will spot something with hidden meaning. For example, the columns surrounding the giant statue of President Lincoln number 36 – the exact number of states at the time of his death.

And the statue of the seated president truly is giant. It is 19 feet from Lincoln’s foot to his head – meaning that the statue would be 28 feet tall if it were standing. That statue is on a pedestal 10 feet high and 16 feet wide.

The memorial reminds me of a structure you might find in ancient Greece. A lot of people say the same thing. That’s no accident, because it was modeled after the Parthenon in Athens.

Appropriately, Lincoln is shown staring out across the reflecting pool onto the Capitol, while just behind him is Arlington National Cemetery – the final resting place for more than 400,000 active duty members of our military, veterans and their families.

Like Lincoln, so many Americans have given their lives so future generations of Americans could live free. We owe the more than 1.3 million members of our military who died in our wars throughout history a debt of gratitude for their patriotism and sacrifice.

The fascination with Lincoln remains strong in country. His memorial continues to be one of the most visited in the nation. And so many great moments have taken place on its steps.

None were bigger or more important than Dr. Martin Luther King’s famed “I Have a Dream” speech, delivered on Aug. 28, 1963 before a crowd of about 250,000 at the March on Washington for Jobs and Freedom. It has been viewed by millions of people since.

It was so fitting that this great speech – a call for racial justice and reconciliation and an end to hatred and discrimination – was given under the gaze of a statue honoring the president who ended the racist institution of slavery.

When you watch our episode on Fox Nation, the Lincoln Memorial will come to life. I will bring you to a place few people have gone before, which one day could very well be open to the public.

We go down below the memorial. There we show you the complex construction and view undiscovered amateur artwork from the men who built this monument for the ages to a president who will be remembered for the ages.

Perhaps the construction workers thought that one day their art worked would be viewed by generations yet unborn. They lived long before the TV, the Internet and computers, but thanks to these modern tools we can take you under the memorial on a journey that’s like entering a time capsule that preserves the America they left behind.

There are a slew of things we disagree on in this country today. But you have search far and wide to think of another man in our history who brings us closer together than Abraham Lincoln. The monument to his life and legacy does the impossible – it rises to the occasion and does justice to represent his life’s achievements.

Abraham Lincoln has not walked this Earth for over 150 years – long before anyone alive today was born. But we can’t bear to say goodbye to this man who played such a vital role in making America great.

New generations continue to discover Lincoln, and all of us need to learn more about him to better appreciate all he did to make our nation what it is today.

Be sure to watch this episode of five brand new features on Fox Nation and check out my Fox News Radio show – “The Brian Kilmeade Show” from 9 a.m. to noon ET, and “Fox & Friends”  from 6 to 9 a.m. on the Fox News Channel, Monday through Friday.