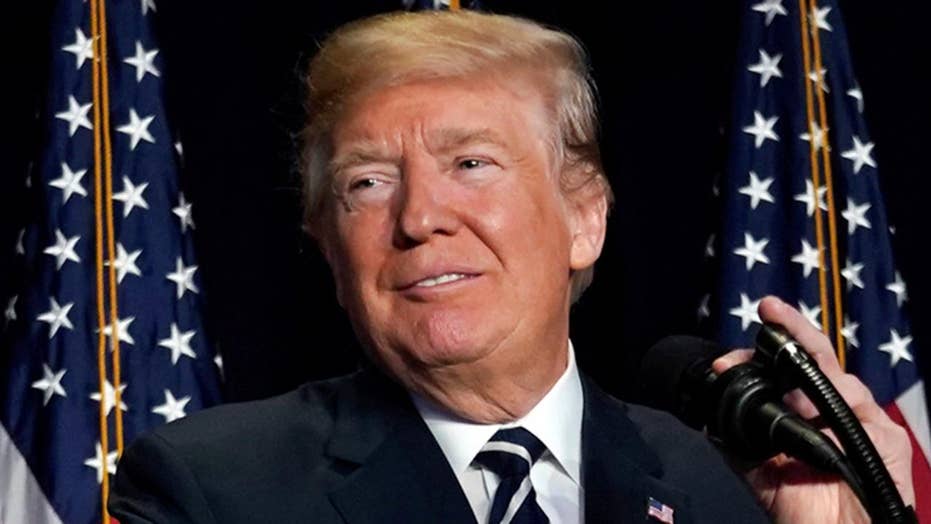 Trump: Power of God seen in the courage of Americans

In a tradition dating back to the Eisenhower administration, President Trump addressed the National Prayer Breakfast on Thursday, reminding Americans of our nation’s Judeo-Christian roots and the centrality of religious faith. From our citizen’s dreams, to the nation’s founding documents, to our monuments, our mottos and even our money, the president said that God rests at the center of all.

“Our rights are not given to us by man,” the president said. “Our rights come from our creator.”

As he did in last week’s State of the Union address, President Trump made ordinary people the heroes and heroines of his speech at the Prayer Breakfast. He again mentioned Ji Seong-ho, the North Korean defector who when acknowledged during the State of the Union speech dramatically thrust his crutches into the air.

The president also lauded members of our military, law enforcement and mothers and fathers rescuing babies from the clutches of opioid addiction.

In watching the president deliver his remarks, I was reminded of another American who once upon a time regularly invoked the Almighty and in doing so, captured the imagination of the nation’s heartland and, at times, irritated those in the social elite.

The late radio newsman Paul Harvey, who passed away in 2009, was a colorful and creative communicator who held court on our nation’s airwaves for over six decades across the ABC Radio Network. I got to know him when I had the privilege writing his official biography, “Good Day! The Paul Harvey Story,” published in 2009.

Just as President Trump did at the prayer breakfast, Harvey often referred to our Declaration of Dependence – our nation’s reliance on God for every good thing.

Now, in some ways, Paul Harvey was everything that President Trump is not – he was gentle, simple, sincere and humble, with no measure of braggadocio. He nicknamed his wife of 68 years “Angel,” and their storybook marriage shaped and assured his climb into the ranks of radio royalty. Harvey had the voice but Angel had the business acumen that helped make him a star.

In contrast, even by his own accounting, President Trump is a proud streetfighter with sharp elbows. He can be decidedly crass in conversation and blunt and bold in business dealings. Over the years, his high profile divorces have become tabloid fodder.

But setting stylistic differences aside, the parallels between Paul Harvey and President Trump are quite startling, and explain, in large part, how both men were able to garner such a strong and loyal populist following.

Consider that both men became famous for:

Being unapologetically pro-American. Before President Trump was touting his America First agenda, Harvey practically wrapped his newscasts in the American flag. When ABC asked him to change his signature opening of “Good morning, Americans!” to simply “Good morning!” in order to make international syndication easier, he adamantly refused, citing his patriotic allegiance.

Never fearing to be controversial. As the North Korean nuclear crisis heats up, it might be helpful to remember that a decidedly hawkish Paul Harvey often lamented the fact that “our best weapons” – code for nuclear – were being kept in their silos while our soldiers fought hand-to-hand combat on the ground. When the United States was accused of killing civilians in Iraq and Afghanistan, Harvey empathized, but said that after the Sept. 11 terrorists attacks “there are no civilians anymore.”

Loving and highlighting American greatness. Harvey, like President Trump, championed mom and pop businesses as well as Fortune 500 companies. He regularly lobbied for the exploration and export of domestic energy, from oil and gas to coal and corn. And in the process, like President Trump, he was an unabashed raconteur who was often accused of being an un-objective “homer” cheerleader. It was a charge to which he proudly pleaded guilty.

Being proud salesmen and negotiators. Long before he ran for the presidency, Donald Trump was a bestselling author, whose book “The Art of the Deal” extolled his smart business skills. Likewise, Harvey garnered $40,000 for a 60-second spot on his radio program. His ads often blended into the broadcast. When he was accused of mixing sales with news he was defiant. “In a day of dark news,” he once said, “the commercial is often the best part of the newscast.”

Being white collar guys with blue collar sense. Though fabulously wealthy with numerous homes and estates, both men never lost touch with the common man and woman. Farmers listened to Paul on their tractors; cab drivers in New York City high-fived Donald Trump.

Being students of stagecraft: President Trump’s major speeches often play out like a reality television show. He loves to turn the focus on others, making them the heroes of the story. Harvey’s newscast was regularly filled with folksy and charming stories of regular people doing interesting things.

Being brief: President Trump’s ascent to the presidency was built upon 140-character tweets. Paul Harvey was known as the journalist who wrote an entire paragraph in a single sentence.

Paul Harvey’s charm and appeal never dimmed until the day of his death at age 90. It remains to be seen how the rest of President Trump’s presidential story will unfold. But, for what it’s worth, if he’s able to continue channeling the principles of the late broadcaster, there may be many good (though volatile) days ahead for our nation’s 45th president.