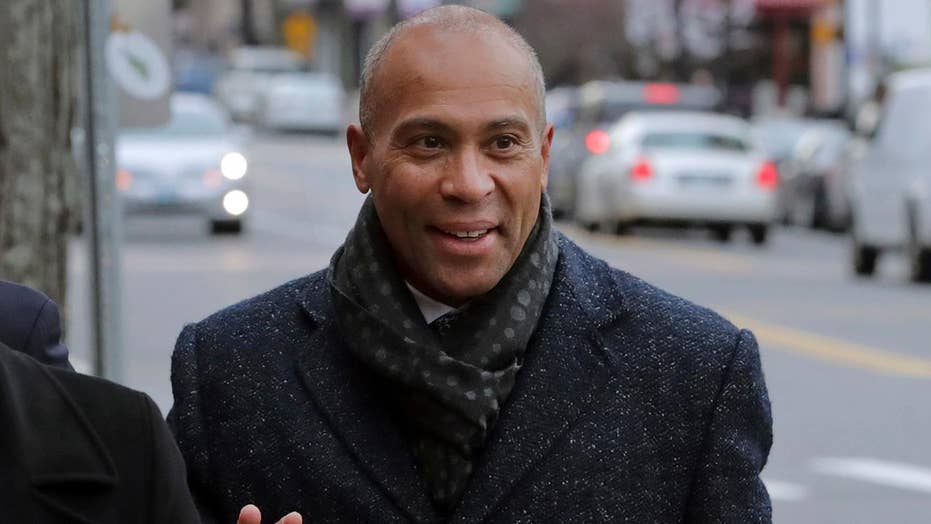 The historically large and competitive field of Democratic presidential candidates grew even larger Thursday with the entry of former Massachusetts Gov. Deval Patrick into the race, further dividing Democrats in their battle to pick a nominee to challenge President Trump in 2020.

This is good news for Trump, especially if it causes the crowded field to devolve into a bitter negative campaign. The more time Democrats spend attacking each other, the less time they have to attack the president.

In addition, Trump would be able to use the attacks by Democrats on their eventual nominee in ads when he runs against that person next year.

Patrick is a former assistant U.S. attorney general and was governor of Massachusetts from 2007 to 2015, becoming the first African-American to hold that position.

Former New York City Mayor and multibillionaire Michael Bloomberg hasn’t made an official declaration of his candidacy yet, but seems certain to do so in the near future. He’s already filed to run in at least two states and is reportedly hiring staff across the country.

And 2016 Democratic presidential nominee Hillary Clinton told the BBC that she’s “under enormous pressure” to run again in 2020, and has refused to rule it out. But it seems unlikely that the former first lady, senator and secretary state will make a third presidential run at this late date, although it’s understandable why she could find it tempting.

Not counting Bloomberg and Clinton, 17 Democrats remain in the race for their party’s presidential nomination, though most have virtually no chance of winning the contest. Eight other Democrats have dropped out of the nomination race even before the first votes are cast.

Former Vice President Joe Biden, Sen. Elizabeth Warren of Massachusetts, Sen. Bernie Sanders of Vermont and Mayor Pete Buttigieg of South Bend, Ind., are atop the polls in the presidential contest. Right now it looks like only a handful of other candidates have even a longshot chance of capturing the nomination.

Patrick joins the Democratic race with the rumored tacit blessing of former President Barack Obama, who may be frustrated by the failure of any other candidate – particularly Biden, his vice president – to both consolidate the field and demonstrate a clear ability to defeat President Trump.

But there is evidence that Democratic primary voters are actually happy with the current crop of candidates.

More moderate Democrats appear slightly less satisfied than liberals. The polls suggest they’d be fine with Biden, particularly given his apparent strength against Trump in the general election.

While it’s unlikely that either Patrick or Bloomberg will be the Democratic nominee facing Trump in November 2020, neither candidate can be written off.

However, there’s a nagging feeling about Biden. Yes, he was exceedingly effective in both the 2008 and 2012 vice presidential candidate debates. But that was a long time ago. He will turn 77 on Wednesday and is showing his age, stumbling a few times in past debates and appearances and sometimes looking like he is past his prime.

The age issue has also been raised with Sanders, who is 78 and is back on the campaign trail after recently suffering a heart attack. It would certainly be raised with Bloomberg, who is 77, and could be raised with Warren, who is 70. However, the 73-year-old Trump would have a hard time attacking any of these candidates as being too old to be president.

Despite Biden’s imperfect performance to date, none of the other center-left candidates – I call them the “junior Bidens” – has managed to achieve real prominence.

That leaves running room – or at least dreaming room – for Patrick and Bloomberg. Can you blame either one for looking in the mirror each morning and thinking he can beat Biden?

Patrick had a strong and moderate, record as governor of Massachusetts. Though he starts with no organization and little money, he is hoping for a solid showing in Iowa and to then eclipse Biden in New Hampshire, which borders Massachusetts.

If Patrick makes a credible showing in Iowa and New Hampshire, he’d be in a position to win the South Carolina primary, where about 60 percent of the Democratic electorate is black. However, right now Biden enjoys very strong support among black voters – outpacing African-American candidates who joined the race months ago – so it would be premature to assume Patrick would come out on top in South Carolina.

One potential weakness for Patrick is that he just left a partnership at Bain Capital, the private equity firm founded by Mitt Romney. Yes, Romney, the former Massachusetts governor, former GOP presidential nominee, and current senator from Utah.

Patrick will certainly get attacked for his work at Bain by Sanders and Warren, who have proposed a slew of new taxes on wealthy individuals and on businesses, along with new regulations on the private sector.

However, I have trouble seeing how a caricature of a “rich fat cat” will stick to Patrick, who is the son of a single mother living in the Chicago projects, and who won scholarships to a fancy prep school and Harvard.

Still, the polls in New Hampshire suggest Patrick is not well-known there, despite an eight-year track record as governor next door.

And unlike Bloomberg, Patrick will need to expend significant time and effort raising money.

The smart money says it’s too late for Patrick to become the Democratic presidential nominee.

My own sense is that if Patrick can raise the contributions and hit the poll numbers needed to get into one of the upcoming Democratic presidential candidate debates, his optimistic message might enable him to beat the odds. Primary politics is a strange beast – and, yes, lightning does sometimes strike.

Remember that when then-Sen. Barack Obama first announced his presidential candidacy, many “experts” said America was not ready to elect a black president. And when Trump first announced he was running for president many pundits wrote him off as a publicity-seeking reality-TV star with no chance of getting the Republican nomination.

Bloomberg, whose net worth is said to be north of $50 billion, has the advantage of being able to write a check to amply fund his campaign and mount a multistate effort. However, his intention to self-fund will keep him out of Democratic presidential debates unless the rules to qualify are changed. That would present him with a big disadvantage.

At the same time, Bloomberg’s opposition to many of the far-left proposals of Sanders and Warren may wind up helping those two candidates more than hurting them with the liberal Democratic electorate.

“With enemies like Mike, he’ll wind up deepening their support,” one wag joked, about Sanders and Warren, “and here we thought they’ve renounced super PACs.”

The recent Fox News poll suggested that only 6 percent of Democratic primary voters would definitely support Bloomberg, while 32 would “never vote for him.” That’s a big disadvantage to overcome.

Bloomberg’s strategy is based on not entering any contests until the Super Tuesday primaries March 3 – after Iowa, New Hampshire, Nevada and South Carolina vote.

Sixteen states – including the two most populous, California and Texas – hold primaries on Super Tuesday. They will divide up roughly 36 percent of delegates to the Democratic National Convention. The four early states will have only about 4 percent of convention delegates.

Bloomberg’s hope is that no two candidates will emerge as strong contenders after the first four nominating contests. Given how quickly previous nomination contests have been defined by the initial results, I wouldn’t put too much stock in that hope. Few things are certain in politics, but Iowa will winnow the field, and New Hampshire will likely define it.

While it’s unlikely that either Patrick or Bloomberg will be the Democratic nominee facing Trump in November 2020, neither candidate can be written off. This unpredictability is one of the things that makes politics so interesting.