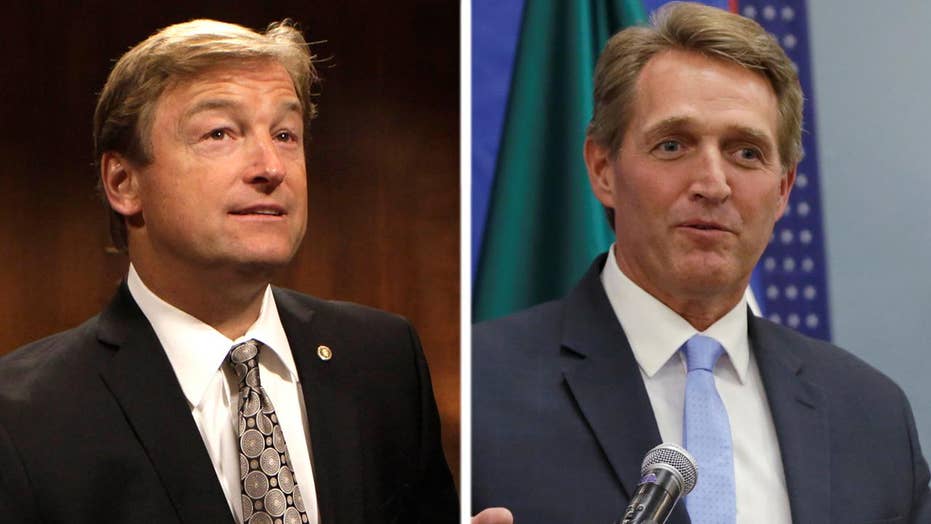 Trump vs Congress: GOP senators at odds with the President

Isn’t it time the president stage an intervention to save Congress from itself? As leader of the Republican Party, the president has every right, even a duty, to intervene when it becomes clear his own party leadership is not only obstructing the will of the people, but is doing damage to the country.

While congressional leadership positions are voted on by party members in Congress, the president can use his significant influence and weigh in both publicly and privately about his own party’s leadership, and whether it’s time for a change.

Considering what the public thinks about Congress, and Senate Majority Leader Mitch McConnell’s own plunging approval rating in Kentucky, the president’s arguments for new congressional leadership should not be a hard sell.

There’s a reason Republicans control the House and the Senate and the White House. Americans want action on Mr. Trump’s agenda and the most basic of conservative issues: improving the economy, jobs, domestic and national security. Finger-pointing is not what the American people voted for.

A new Quinnipiac poll reveals the GOP-led Congress has a 10 percent approval rating. This is just one point higher than Congress’ all-time low of nine percent, in November 2013. One might think the anti-Trump Republican leadership has something to do with an agenda that, in the end, despite all their theater, is anti-Trump.

In March, while still pathetic, they had an 18 percent approval rating. Then their hostility to the president’s agenda became apparent when they killed the effort to ameliorate the scourge of ObamaCare. Exposing themselves as frauds, Congress’ approval crashed to 10 percent. A 44 percent plunge in five months is worth noticing, and acting on.

Oh sure, we’re all supposed to think it was that wild rogue SenatorJohn McCain who, with his one vote, doomed the ObamaCare replacement bill. How convenient — the congressional GOP can say they tried but for that one guy. Yeah, no. While this columnist is no fan of Mr. McCain (who also campaigned and raised money on repealing ObamaCare), it’s difficult to believe Mr. McConnell has so little influence over what happens in the Senate. Yet, that is what we are supposed to believe.

Either Mr. McConnell, after decades in the Senate, has no influence when it counts, or he’s in complete control of the obstructionist agenda.

This is also not working out so well for Mr. McConnell at home. A new poll by Public Policy Polling found just 18 percent of Kentuckians approve of the job he’s doing. Just 37 percent said they would vote to re-elect him.

Despite the shockingly low congressional approval number, historically Americans tend to vote on an individual basis for their senators and representatives. But the correlating crash of Mr. McConnell’s state approval and an 18 percent approval for Arizona Sen. Jeff Flake, who has become one of the more vocal anti-Trumpers, should sound warning bells for all obstructionist Republicans.

Still, perhaps Mr. McConnell and House Speaker Paul D. Ryan simply believe the constant media hectoring about how evil Mr. Trump is, and how he must be stopped. It’s a common mistake made by the Masters of the Universe inside the Beltway and in media — their world is driven by what’s said by their television pals, and not what is really happening in America.

If anything wakes up the Republicans, it should be the condition of the Democratic Party. They ran in 2016 against Mr. Trump. Since his election, their only message has been “Against Trump.” Oh, and that Mr. Trump is a Russian poodle-spy-colluder. That seems to have run dry, now it’s Mr. Trump is a crazy-Nazi-racist-colluder. This, too, is running dry.

Mr. Trump, despite being smeared all day every day by an increasingly frantic legacy media, has seen his approval ratings rise. A few days after the Charlottesville riot, the president had a 40 percent approval according to Rasmussen’s Daily Tracking poll.

Now? Mr. Trump’s approval has risen to 43 percent. It appears Americans don’t like the political and media establishment using the obscene event to declare the president himself a Nazi. They also especially don’t appreciate the same desperate media and political efforts to conflate Trump supporters with white supremacists and racists. Go figure.

In the meantime, the GOP has a chance to actually do their job by accepting we need new congressional leadership that is not blinded by political jealousy of the president or anger at the American people for sending a message that we want real action and change.

The congressional leadership of both Mssrs. Ryan and McConnell has obviously failed. They should resign their leadership posts. In defense of himself, Mr. Ryan points to “hundreds of bills” the House has passed, and how they passed an ObamaCare bill and then, like a child, points to the Senate as the problem (as good a foil as Mr. McCain was for Mr. McConnell).

Yet, there’s a reason Republicans control the House and the Senate and the White House. Americans want action on Mr. Trump’s agenda and the most basic of conservative issues: improving the economy, jobs, domestic and national security. Finger-pointing is not what the American people voted for.

For Mr. Trump’s agenda to be pursued, he needs leadership partners in Congress. It’s time Mr. Trump used his considerable influence with the American public and his own party to help facilitate a leadership change.

If congressional Republicans instead double-down with their current obstructionism, then so be it. They will then own the damage done to the country, and can then look to the destruction of the Democratic Party as they lay waste to the party of Lincoln and Reagan.