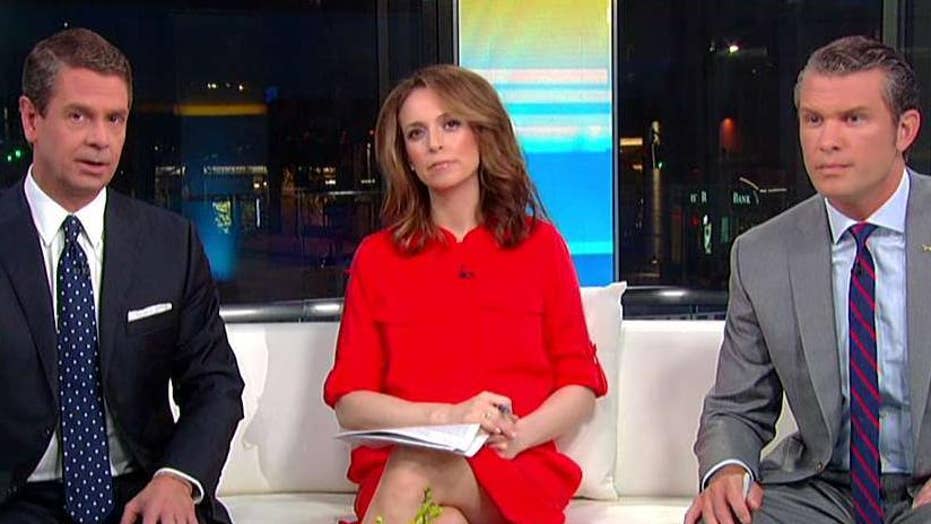 The escalation in the U.S.-China trade war Friday – with each country slapping new tariffs on the other – is part of a larger fight that will decide which nation will shape the economic and geopolitical future of the 21st century. President Trump is right to refuse to raise the white flag of surrender.

Thankfully, few expect a shooting war to erupt between China and the U.S. Instead, our two countries are waging economic warfare, with trade policy being central to the battle. And like escalation in a shooting war, hostile actions taken by one side in our trade war with China will typically prompt the other to retaliate.

That’s why when China announced Friday that it would increase tariffs on $75 billion in imports from the U.S., President Trump was right to respond the same day.

CAROL ROTH: YES, TRUMP SHOULD BE TOUGH ON CHINA, BUT THE TARIFF ROUTE IS THE ROAD TO DISASTER

Some Trump critics are saying America should back off this fight. They argue that Trump shouldn’t take on a rising China, because bilateral trade benefits both nations and because tariffs will hit U.S. consumers and businesses with higher prices and destroy American jobs. Some even warn the trade war could lead to a dangerous and deadly military confrontation.

I say the Trump critics are wrong.

The Trump administration has now set on a course to ensure that whenever Beijing acts like a rogue regime there will be costs.

In fact, now is the time for the U.S. to push back against China for years of trade violations, intellectual property theft and unreasonable demands that past American presidents have complained about but failed to do anything about.

It’s about time we finally have someone in the White House who is bold enough to take on the China challenge and has the right foreign policy ideas to do it.

President Trump is fond of calling his brand of foreign policy “America First.” This policy is really a matter of simple common sense. America – like every other nation – should place its own interests and those of its citizens ahead of other nations or secondary concerns.

That means that China must be confronted and stood up to, like the international bully it is has become.

Faced with a policy of weakness and appeasement when President Obama was in office, China’s power, economic might and military muscle grew exponentially in the eight years before President Trump took office. If Trump simply continued the Obama policies, China would grow stronger still at U.S. expense.

For Trump, there is simply no other choice. There will be costs in the form of higher prices for products American buy and we will suffer because of reduced exports to China due to the tariff increases. But in the long run, these costs are worth short-term pain to achieve long-term gain.

If only President Obama had stood up to a rising China starting in 2009, President Trump would not be in the position that he is in today of asking the American people to make some tough sacrifices.

Clearly, Obama had ample opportunities to put Beijing on notice. For example:

Obama did nothing to match or deter China from building an awesome military machine. China developed weapons that can sink U.S. Navy aircraft carriers, along with missiles that can destroy most U.S. bases throughout Asia and negate the military capabilities or our allies. Instead of spending more on defense, Obama cut military spending to the bone – something Trump has had to correct at great cost.

Obama failed to stop China from making territorial claims all throughout Asia. Whether it was in the South or East China Sea, over Taiwan or over small islands and reefs, China’s goal was to turn the broader Asia-Pacific into its very own giant sphere of influence. In response, Obama proclaimed a so-called “pivot to Asia.” The pivot sounded great, but never happened. It was under-resourced, devoid of any strategy and accomplished nothing. China pushed even harder in the face of Obama’s weakness, building islands to cement its claims in the South China Sea and constructing military bases.

Obama did nothing after China hacked the U.S. government’s Office of Management and Budget. China stole an astounding 23 million personnel records of federal workers – including many who work in the national security and intelligence establishment.

Obama failed to respond when China broke World Trade Organization rules. China gave hundreds of billions of dollars of illegal subsidies to domestic industries to try and dominate the global economy. Named Made in China 2025, this initiative was designed to ensure that China’s electric cars, solar panels, 5G equipment and artificial intelligence technologies not only dominate the Chinese domestic market, but the global economy. At the same time, China – along with its state-owned enterprises – used all sorts of methods to steal U.S. intellectual property worth hundreds of billions of dollars through cyberespionage or making access to the Chinese market contingent on getting access to such information.

While the above list is far from complete, the point is clear: the Chinese government is a bad actor that has gained from aggressive behavior that enhances its power at the expense of others – especially the United States.

The Trump administration has now set on a course to ensure that whenever Beijing acts like a rogue regime there will be costs.

The American people should know, as the president has tried to explain, that this test of wills could cost them economically. The good news is that the American people know their history and understand the need for shared sacrifice for the greater good.

An earlier generation of American leaders stood up to the Axis powers in World War II when they tried to dominate the world. Then American presidents stood up the Soviet Union during the Cold War. And most recently, our leaders began the fight against international terrorism after the attacks of Sept. 11, 2001.

Now President Trump is standing up to China’s efforts to dominate the 21st century through economic, military and diplomatic thuggery. He deserves the support of every American, regardless of political party, in this vital endeavor.

Nothing can beat an America that is united under one goal and a common vision. China needs to understand that, or learn the lesson the hard way.