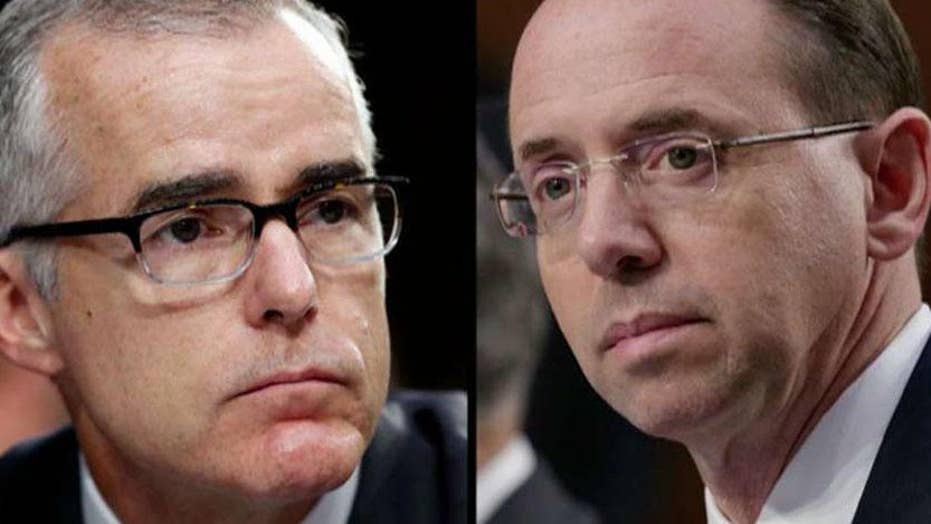 Ever wonder why people hate lawyers? Consider Deputy Attorney General Rod Rosenstein’s non-denial denial of his participation in discussions of an attempted coup against the duly elected president of the United States.

The story is being given a second life thanks to the hype surrounding the rollout of a new book by Andrew McCabe, the former deputy director of the FBI.

McCabe, of course, was fired after an inspector general investigation found that he leaked investigative information and then lied about it. He has been referred to the Justice Department for consideration of a false-statements prosecution.

ANDREW MCCARTHY: MUELLER’S REPORT IS FOR AN AUDIENCE OF ONE, BUT IT ISN’T PRESIDENT TRUMP

There is no doubt that, when he was acting FBI director after President Trump’s May 2017 firing of Director James Comey, McCabe huddled with Rosenstein to mull over options for removing the president from office.

But we have known this for six months – ever since The New York Times published its bombshell report. Indeed, at the time, I wrote a column about it for National Review titled “Rod Rosenstein’s Resistance – weasel words, weasel moves from an emotionally overwrought deputy AG eager to ingratiate himself with Democrats.”

There are really no new revelations in this week’s breathless reporting. The story is a retread, trotted out again because CBS is hoping to generate ratings for its “60 Minutes” interview of McCabe on Sunday night, the launch of the McCabe book tour.

There has been a good deal of commentary this week about whether McCabe and Rosenstein were seriously brainstorming about a coup attempt; or whether, instead, discussions about invoking the 25th Amendment and possibly “wiring up” against the president (i.e., covertly recording him) were just graveyard humor.  The truth is somewhere in the middle: The conversation was no joke, but the idea was lunacy.

Let’s put things in perspective. There has been a good deal of commentary this week about whether McCabe and Rosenstein were seriously brainstorming about a coup attempt; or whether, instead, discussions about invoking the 25th Amendment and possibly “wiring up” against the president (i.e., covertly recording him) were just graveyard humor.

The truth is somewhere in the middle: The conversation was no joke, but the idea was lunacy.

No one was in a joking mood when these discussions took place. McCabe was in the midst of formally opening a criminal investigation of the president, and Rosenstein was handwringing over the possible appointment of a special counsel.

McCabe and the FBI’s leadership had been trying to make a criminal case against Trump for months, and McCabe thought – wrongly – that the firing of Comey might be a sound legal basis for an obstruction prosecution. 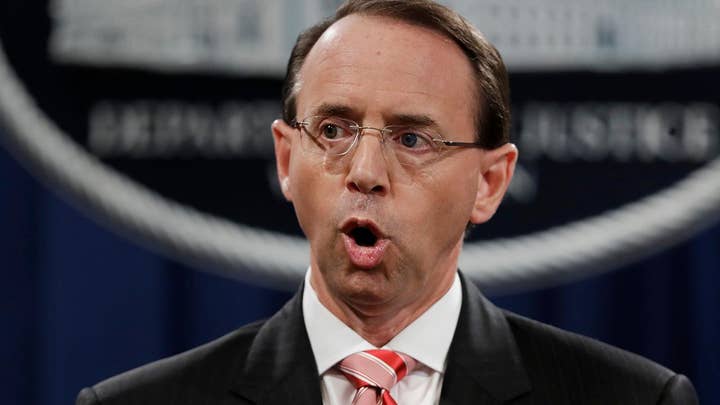 Rosenstein, meanwhile, was reeling. He had foolishly thought the memo he wrote justifying Comey’s dismissal would win broad bipartisan praise.

Instead, Democrats strategically framed the dismissal as an attempt to obstruct the Russia investigation, and they lashed out at Rosenstein for his part in it.

The deputy attorney general became despondent: convinced that Trump had made him the fall-guy; desperate to get back into the good graces of the anti-Trump Washington establishment, with which Rosenstein had heretofore enjoyed good relations. (At a time when it was difficult for Trump to get his nominees confirmed by the Senate, Rosenstein’s nomination to be deputy attorney general was approved by a lopsided 94-6 vote.)

That is the context of the McCabe-Rosenstein discussion of the 25th Amendment. It was no laughing matter.

Right after he fired Comey, Trump intensified the controversy by rebuking the former director in a White House meeting with Russian diplomats.

Rosenstein and McCabe both concluded that the president was either unhinged or had possibly removed Comey in order to derail the Russia investigation (notwithstanding McCabe’s Senate testimony, right after Comey’s firing, that “There has been no effort to impede our investigation to date”).

That is why the two men talked about “wiring up” against Trump – i.e., having someone covertly record him. This was neither idle talk nor dark humor. It was a logical aspect of their 25th Amendment brainstorming.

If you’re going to convince people that the president is unfit, you need evidence of his unfitness. McCabe and Rosenstein were clearly considering whether they could secretly capture Trump saying things that were incriminating or crazy (or both). They could then use such recordings to try to convince top administration officials that the president needed to go. 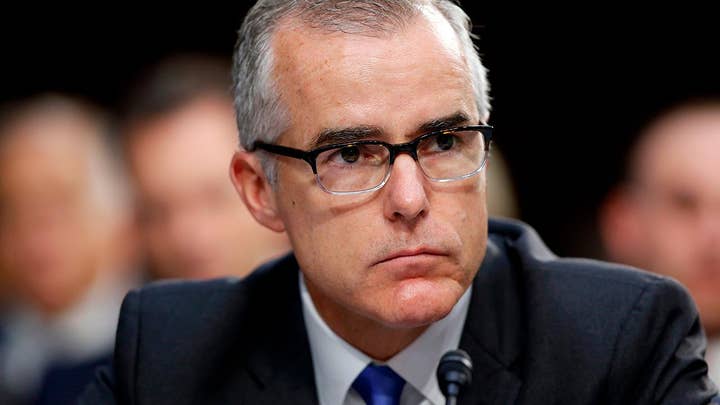 On the other hand, while talk about invoking the 25th Amendment was serious, it was also ridiculous. The amendment has nothing to do with the situation McCabe and Rosenstein believed they were confronting: a president who is either potentially obstructing an investigation or not up to the obligations of the office.

The 25th Amendment was adopted in the years shortly after President John F. Kennedy’s 1963 assassination to address the potential problem of a president who is rendered physically or mentally unable to perform his duties – as, for example, President Woodrow Wilson was by a stroke.

The amendment is not a substitute for the Constitution’s impeachment process: If you believe a president is guilty of maladministration – of criminal, abusive, or incompetent behavior – the remedy is for Congress to impeach him, not to declare him physically or psychologically unfit.

Moreover, McCabe and Rosenstein were in no position to invoke the 25th Amendment. By its own terms, it can only be invoked by the president himself, or by the vice president in conjunction with a majority of the Cabinet (or a congressionally authorized committee).

Neither McCabe nor Rosenstein was a Cabinet officer. All they could do was speculate about which Cabinet officials might be amenable to considering a 25th Amendment ploy; and they quickly dismissed the idea because they realized they were nowhere close to a Cabinet majority, let alone to a green light from the vice president.

So yes, it was a serious discussion; but it was also an ill-conceived discussion.

That brings us to Rosenstein’s denial of McCabe’s acknowledgment of their 25th Amendment chatter. As the Washington Examiner reported (the italics are mine):

Could this statement possibly be more disingenuous? Consider:

1. Rosenstein says he never authorized recordings. But no one claims that he did. The question is whether he and McCabe discussed the possibility of authorizing them. If he could do so, Rosenstein would deny that this discussion happened at all. But he can’t do that because the FBI memorialized it at the time. Since he can’t credibly deny McCabe’s admission that the two of them talked about recording the president, Rosenstein resorts to the shopworn tactic of distorting the allegation.

It is understandable that the deputy attorney general wishes he hadn’t talked about removing the president. Legally, it was a harebrained idea. As a matter of civics – unelected bureaucrats brainstorming about how to reverse a democratic election – it was remarkably arrogant. But it happened, nonetheless. Rod Rosenstein’s lawyerly evasions can’t change that.