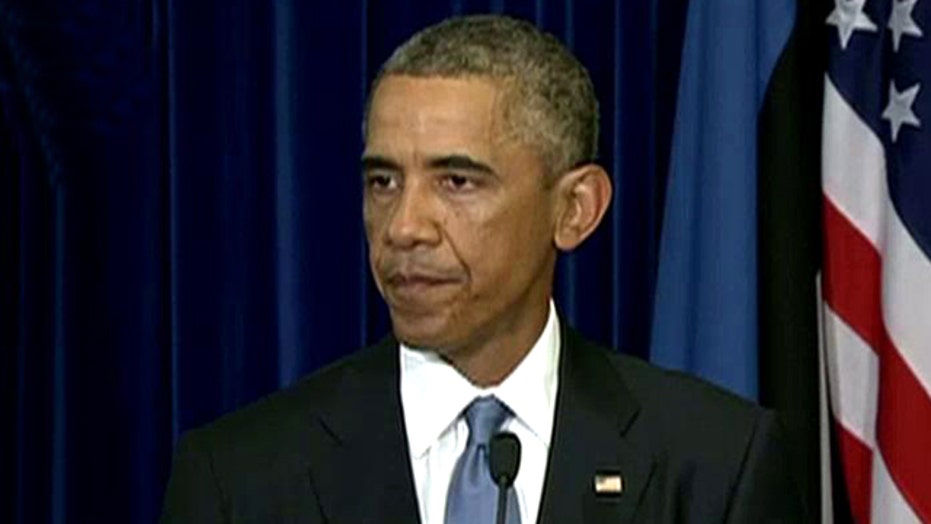 Obama: Prayers of American people are with Sotloff family

It’s been quite a summer. The world is not a pretty place right now but I see you have had a chance to play golf. In fact you’ve played golf through the worst of it. Right after announcing that American journalist James Foley had been beheaded.

Now I play golf and I enjoy it. But I’m not president of the United States… so I have a little more time.

But I digress. Let's skip on down to the really important part... I hope you’ll read closely. There will be a quiz.

"Hostilities exist. There is no blinking to the fact that our people, our territory and our interests are in grave danger. As commander in chief of the Army and Navy, I have directed that all measures be taken for our defense. I ask that that congress declare that since the unprovoked and dastardly attack by Japan on Sunday, December 7th, a state of war has existed between the United States and the Empire of Japan. No matter how long it may take us to overcome this premeditated invasion, the American people in their righteous might will win through to absolute victory. With confidence in our armed forces, with the un bounding determination of our people-we will gain the inevitable triumph--so help us God."

Franklin Delano Roosevelt uttered those words on a December day almost 73 years ago.

In the name of that same God invoked so eloquently and powerfully by that president, I ask that you, Mr. President -- if you're not too busy playing golf, campaigning, orchestrating the cover ups of all the "phony scandals," and just being cool -- could again declare war on the enemies who have unleashed "unprovoked and dastardly attacks" on the United States.

This summer we have now seen two American journalists beheaded by the “Islamic State” – ISIS or IL or IS. We are at war, sir, whether you like it or not.

That war would last for 4 long years and would kill 60 to 80 million people, including 291,557 American soldiers, sailors, airmen and Marines.

That terrible toll was exacted in a war wherein the enemy combatants of the Axis powers, Japan, Germany, and Italy, had no means whatsoever of successfully mounting  a military strike against the United States homeland.

Even if we hadn't won the war, and even if we hadn't captured/liberated Werner Von Braun and the other German scientists at  Peenemunde before the Russians got to them, it would have been at least 10-15 years before Germany would have had a rocket/missile capable of reaching the U. S. mainland. And yet President Roosevelt galvanized, mobilized, and energized, and united the American people like never before.

Then America, in its "righteous might" unsheathed and unleashed the most devastating war machine in the history of mankind.

Guess what Mr. President, THE GOOD  GUYS WON!! They won because President Roosevelt had the "cojones" to "pull the trigger," giving no thought to his legacy, but giving thought only to the preservation of the American way of life.

Forget the fun on the golf course, Mr. President. Does that way of life mean anything to you, sir,  or are you still so hell bent on "fundamentally changing" the American way of life that you cannot, or will not, change course and "pull the trigger?"

Israeli Prime Minister Benjamin Netanyahu has repeatedly said that, for Israel, the question of the current conflict with the enemies of Israel is an existential one.

In my opinion, sir, and in the opinions of most of the grown-ups in our military apparatus, and other expert military analysts, the United States is now engaged -- or not really engaged -- in no less an existential conflict.

Please pay attention sir. It's not your shot yet. It's Alonzo's shot.

We are being told every night on TV that the American people don't have the stomach for more war 10,000 miles away. Well sir, I think you should conduct another of your seemingly endless polls and ask those Americans a few simple questions:

Do Americans have the stomach to see planes crash into our buildings again, or citizens running through the streets of New York City with the residue of those buildings and the ashes of those who were burned alive on their faces again, or a man and wife holding hands and jumping out of an 80th story window, together, to keep from being burned alive again?

Sir, why don't you ask Americans these simple questions and see what their answers are.

Whether you like it or not sir, World War III has already started and it is time for America to "take arms against a sea of trouble, and by opposing," try to keep 9/11 and other attacks on America from happening again.

From 1941-45, 291,557 American soldiers, sailors, airmen and Marines died to defeat an enemy  that had  absolutely no means of attacking the United States mainland. And now, we are being told that after more than 10 years of fighting those ruthless bastards in Iraq and Afghanistan where "only" 6,802 of our warriors have been killed, America doesn't have the stomach to go do what needs to be done?

Please understand the context of the word "only." With all my heart I thank all thank these warriors and their families for the sacrifices they have made, and continue to make. And now we are giving up the fight? We are surrendering? We are  being told that AMERICA DOESNT HAVE THE STOMACH TO DO WHAT NEEDS TO BE DONE????????

Well sir, you need to have enough stomach, GUTS, COJONES for all of us. It's called LEADERSHIP!!

If that is so, that America doesn't have the stomach to do what needs to be done, I say shame on us, and especially, shame on you, Mr. President. We deserve what we will get.

I believe that it is time for America to go on wartime footing, all the way up to and including a "peacetime" draft if necessary. Heck, pay the soldiers what congressmen, senators, and your White House spin doctors make.

Go save Iraq -- AGAIN. Take 20% of their oil revenue until the money we have spent freeing them -- TWICE -- is paid back. Leave a residual force there to keep this from happening again (see Japan, Germany, and Italy) and tell anyone who doesn't like it to kiss AMERICA's happy, safe rear end.

I am 66 years old, I'm in pretty damn good shape and I will go right now. I've lived a good life and I want my granddaughters to have the chance to live one too.

I will go now if called… Unfortunately, I know that I never will be called, so I will answer a different call.

I will call on you, Mr. President. Do you have the stomach to lead our scared, uncertain, worried, "tired of war" American citizens in a fight to the death against the Islamic murderers, even if the "tide of public opinion" is against it?

We have trained them, fed them, housed them, equipped them, armed them, and stationed them in close proximity to hot spots all over the world, in order to be ready for the start of World War III.

It's high time we turn our troops loose to let them GO KILL THE BAD GUYS. Turn them loose, sir, and give America another, "righteous might, so help us God" moment.

Larry Gatlin is a country music singer and songwriter.
ADVERTISEMENT