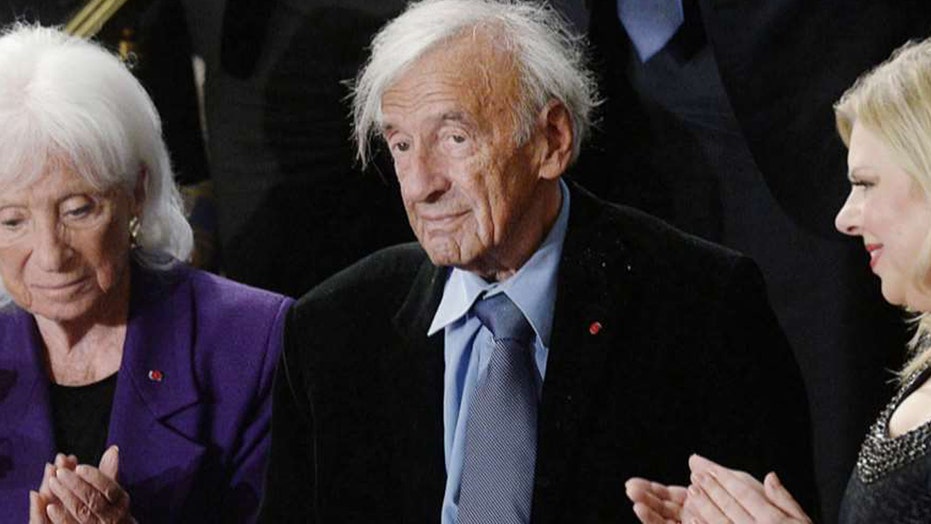 'Night' author was awarded the Nobel Peace Prize in 1986

Elie Wiesel the voice of 6 million Jews who were murdered during the Holocaust at the hands of the Nazis may be gone but he will never be forgotten.

Wiesel was born on September 30, 1928, in Sighet, Romania in the Carpathian mountains.

As the New York Times reported in his obituary “his idyllic childhood was shattered in the spring of 1944 when the Nazis marched into Hungary. With Allied troops fast approaching, many of Sighet’s Jews convinced themselves that they might be spared. But the city’s Jews were swiftly confined to two ghettos and then assembled for deportation.”

Elie dedicated his life to remembrance, reflection and principle. Elie made sure that the statement “Never Again” was not just directed toward Jews but it was meant for all innocents targeted because of who they are.

In March of 1944, Hungary was occupied by Germany and the Final Solution to exterminate Jews of Eastern Europe was underway. Elie was just 15 years old when he and his family along with his Jewish neighbors were rounded up and sent to locally set up ghettos.

Once settled in the ghettos the Jews of Hungary in May of 1944 were sent to Auschwitz concentration camp and shortly after their arrival 90 percent were exterminated in Auschwitz ovens or Birkeneu gas chambers. Elie’s mother and one of this three sisters were killed there. Wiesel and his father were sent to the Buchenwald concentration camp. His father died just a few weeks before liberation. Elie was freed after the camp was liberated by the U.S. 3rd Army on April 11, 1945. Elie survived the Holocaust with his two sisters and they were reunited in a French orphanage. Elie finally made his way to America in the mid 1950’s.

Elie dedicated his life to remembrance, reflection and principle. He vowed to tell the story of the Holocaust to the world and he did just that through his writings and speeches and through prayer. Elie made sure that the statement “Never Again” was not just directed toward Jews but it was meant for all innocents targeted because of who they are.

Elie was a deep thinker, a philosopher, poet, humanitarian, academic, author, Nobel laureate, but above all he was a loving husband, father and a proud American Jew. He loved his adopted country and contributed greatly to our society.

As a former U.S. Ambassador to the Republic of Hungary from 2001-2003 and a Jew, I was touched when in 2009 I read that Elie returned to Hungary for the first time since the Holocaust. He was welcomed and embraced by thousands of proud Hungarians. There he participated in conference with the Parliament and met with Prime Minister Bajnai and President Solyom.

The sad fact is that every day we lose Holocaust survivors. Soon there will be no more. There is nothing more powerful than victims of one of the darkest periods of human history telling of their first hand accounts of evil and to bear witness to a world that has not fully learned the lessons of extremism and evil masquerading as legitimate governments and society’s.

Elie may have been born in Europe but he was an American treasure. His life was lived for others. His words and deeds made a difference.

His contributions to our nation and the world were selfless and he leaves behind a legacy that will never be forgotten.

My wish is that Elie is now reunited with his family and friends and he can now fully enjoy the peace he so dearly deserves.