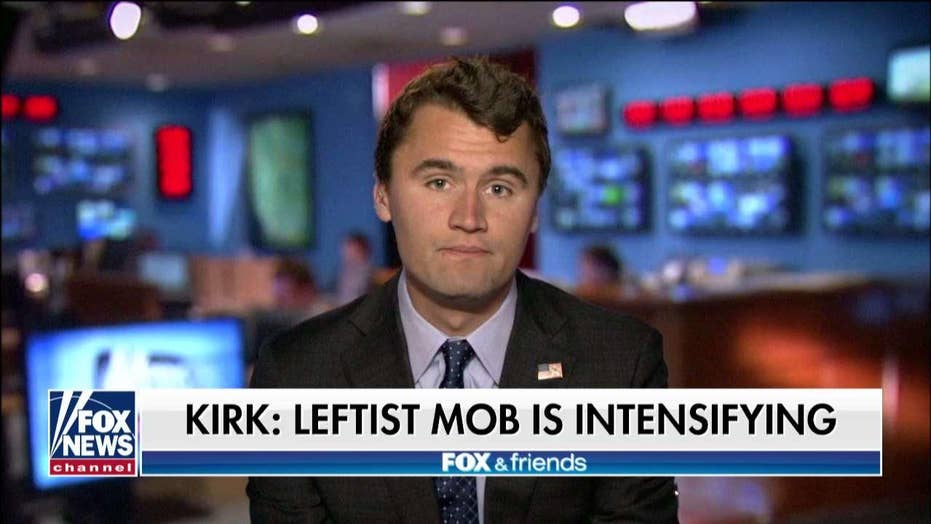 'Losing the Battle of Ideas': Kirk Says the Left Is Resorting to 'Mob Tactics' With GOP Harassment

As the campaigning for Tuesday’s midterm elections draws to a close, Democrats are seeking to gain political advantage by falsely accusing President Trump of motivating some unbalanced people to take violent actions. The charge is absurd.

Yet Democrats are ignoring their own angry calls to “resist” the president by protests at the homes of members of his administration, angry confrontations at movie theaters and restaurants, and other harassing behavior.

In the midst of the investigation into the mailing of pipe bombs to high-profile Democrats and to CNN, President Trump responded with heartfelt concern, issuing a firm condemnation from the White House that made clear he will not tolerate politically motivated violence of any kind.

“In these times we have to unify, we have to come together," the president said, calling mailing of the pipe bombs "abhorrent to everything we hold dear and sacred as Americans" and vowing that “we will get to the bottom of it.” Fortunately, none of the bombs went off and no one was hurt.

In addition, the president strongly denounced anti-Semitism in several appearances in the wake of the horrific murders of 11 Jews at a Pittsburgh synagogue one week ago. He visited the synagogue to join in mourning of the dead and to make it clear that religious prejudice has absolutely no place in our country.

“This wicked act of mass murder is pure evil, hard to believe, and frankly, something that is unimaginable. Our nation and the world are shocked and stunned by the grief,” the president said of the synagogue massacre. “This was an anti-Semitic act. You wouldn’t think this would be possible in this day and age.”

President Trump added that “anti-Semitism and the widespread persecution of Jews represents one of the ugliest and darkest features of human history.”

Despite the president’s actions, Democrats and their allies in the liberal media looking for political advantage just days before the elections ratcheted up the fearmongering, insisting that President Trump is ultimately responsible for somehow motivating the mail bomber and the synagogue gunman.

“The president, and especially the White House press secretary, should understand their words matter,” CNN President Jeff Zucker said after a pipe bomb was mailed to CNN.  “Thus far, they have shown no comprehension of that.”

Former Hillary Clinton spokesman Philippe Reines – whose old boss recently told Democrats that they have no obligation to be civil towards Republicans – went even further off the deep end. In a tweet about the mailed pipe bombs he addressed the president and said “this is on you.” Reines added: “With every fiber of your rotten being you’ve incited & condoned hate,” and complained that “Never in 643 days have you discouraged people from unleashing the violence inside them.”

That couldn’t be further from the truth.

It is in fact the Democrats who are the real architects of an environment of political hate, encouraging their supporters to abandon civility and aggressively harass Republican officials. When liberal activists predictably responded to these calls by harassing Republican officials, Democratic leaders didn’t utter a peep of disapproval.

The silence of Democrats has been similarly deafening when it comes to Antifa, the domestic terrorist movement that has made premeditated political violence its calling card.

But the Democrats’ hypocrisy runs even deeper. A Bernie Sanders supporter shot and seriously wounded House Majority Whip Steve Scalise, R-La., at a Republican baseball practice last year – screaming “this is for health care” as he fired round after round at Republican members of Congress. At the time, House Minority Leader Nancy Pelosi, D-Calif., denounced the idea that the shooter’s obvious political motives were relevant.

"Outrageous," Pelosi said, adding that it is "beneath the dignity" of members of Congress to blame Democrats for the actions of a "sick individual" simply because he supported Democrats.

When Hillary Clinton said that civility can only resume if Democrats gain control of Congress in Tuesday’s elections, she was really giving voters an ultimatum – vote Democrat or the harassment, intimidation and possibly even violence will continue.

Perhaps that’s the mentality behind the Democrats’ demands that President Trump accept responsibility for despicable crimes by two deranged men that the president immediately denounced. Or perhaps the Democrats are just so accustomed to hypocrisy at this point that they don’t even notice it.

The best way the American people can respond to the political incitement by Democrats is to vote for Republican candidates in the midterm elections.