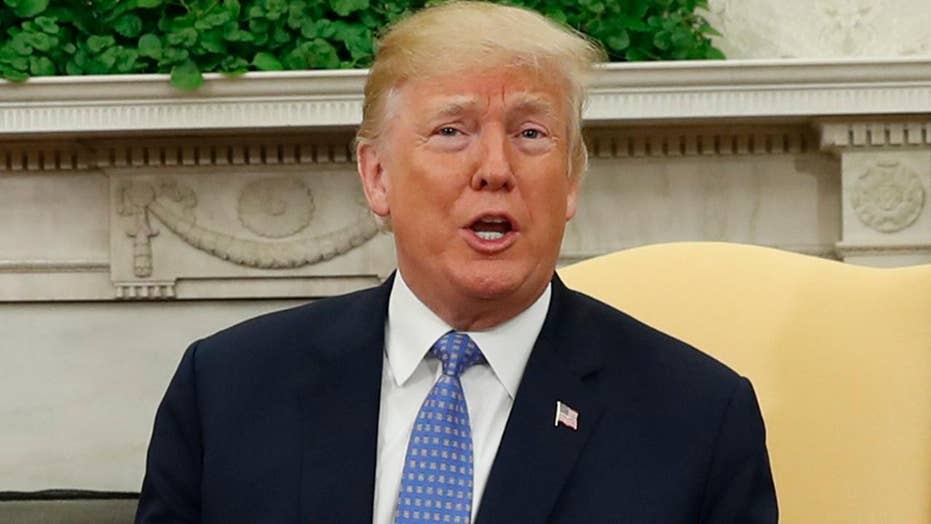 At the conclusion of the day-long summit between North Korean dictator Kim Jong Un and South Korean President Moon Jae-in Friday, one thing was clear: the meeting would never have taken place if not for President Trump. And for this achievement, President Trump deserves the Nobel Peace Prize.

It’s true that we won’t really know for weeks or months whether the North-South Korean summit will bring about better relations between the two Koreas and result in Kim getting rid of his small arsenal of nuclear weapons.

We shouldn’t naively believe any promises Kim makes without verifiable proof, because he has a history of lying. His promises may last as long as a snowman in August.

But President Trump’s tough stance against a nuclear North Korea and his success in winning approval of international economic sanctions against the North at the United Nations that have crippled the country’s economy clearly succeeded beyond expectations in pushing Kim to the negotiating table.

North Korea and South Korea’s historic meeting: What to know

A look at what happened during the historic meeting between North Korea’s Kim Jong Un and South Korea’s Moon Jae-in . Donald Trump also weighed in, a look at what he said.

And President Trump’s willingness to hold an unprecedented summit with Kim in coming weeks gave the dictator the incentive to recently announce he was halting nuclear weapons testing, closing an underground test site, and ending tests of long-range missiles.

In 2009, President Obama won the Nobel Peace Prize for… um … for ... well, for giving good speeches and having big plans for making the world a more peaceful place.

In 2015, the former secretary of the Nobel Institute, even acknowledged that the prestigious prize was awarded prematurely to President Obama – for achievements the institute hoped Obama would achieve, rather than for what he had actually accomplished.

“Many of Obama’s supporters believe it was a mistake,” Geir Lundestad wrote in his memoir. “As such it did not achieve what the committee had hoped for.” He added that awarding the prize to President Obama “was only partially correct.”

In contrast, President Trump has concrete accomplishments to his credit early in his term – the summit Friday and his upcoming summit with Kim.

I’m no Pollyanna. I realize Kim will likely never agree to give up all his nuclear weapons – though he could agree to limits on his nuclear and missile programs and other actions to make him less of a threat to his neighbors and to the U.S.

And I realize that there is every reason to believe the inter-Korean summit was nothing more than a giant PR stunt on the world stage – big on photo ops and short on any real substance.

But give President Trump the credit he deserves – he has successfully de-escalated the biggest of threats: the possibility of a war with North Korea where nuclear weapons could have been used in mass, with millions of people dying as a result. This is no small accomplishment – and certainly worth the Nobel Peace Prize.

In addition to setting the aspirational goal of working toward the removal of all nuclear weapons from the Korean Peninsula, Kim and Moon said they would seek talks with the U.S. to officially end the Korean War with a peace treaty. The war ended in 1953 with an armistice, meaning that the North and South remain technically at war.

Will there ever be a real peace treaty between the divided Koreas and the U.S.? We don’t know – but we’re a lot closer to one now than we were before President Trump took office. And realistically, I bet Kim will never try to open his country to the world in any meaningful way.

The summit we just witnessed, at least to me, feels like the geopolitical equivalent of Bill Murray’s movie “Groundhog Day” – Pyongyang makes big promises and nothing happens besides negotiations that go nowhere. The North – then led by Kim’s father – did the same during similar summits in 2000 and 2007. Indeed, the photo-ops look nearly identical.

But in all honesty, if that is indeed the case, who cares? That is what we should have expected, because North Korea’s playbook is clear. Promise the world, stall for time, and string the world along until it has a bigger problem to deal with. It worked in the past, and it will most likely work again.

But none of that matters. We need to focus on the results that President Trump has achieved so far. And they are – to use his phraseology – 'yuge.'

The Trump administration has successfully contained the North – militarily, economically and diplomatically – and put the hermit kingdom in a vise that would be hard to escape from.

With an economy worth only $14 billion annually – only one-third the size of Ethiopia – we need to understand that North Korea is a problem that we can now manage. That’s an important point to remember, even if we aren’t ever able truly get Kim to give up all his nuclear bombs.

So while the inter-Korean summit was no game-changer, we need to see the positives of what has been achieved. The danger from Pyongyang, while not entirely removed, can now be handled – likely for decades. Thanks to President Trump.

History tells us we can do this. If we were able apply a maximum pressure campaign on the mighty Soviet Union – which had thousands of nuclear weapons – for 40 years, we can certainly contain a small impoverished nation that can’t even feed its own people.

Combine that with President Trump’s campaign to nearly destroy the Islamic State – freeing millions of people from what can only be described as enslavement by a fanatical terrorist organization – and you see the President Trump has achieved some big things on the world stage.

For all these reasons, I say give President Trump the Noble Peace Prize. And if it were possible, maybe the Nobel Institute should strip President Obama of his prize and give that to President Trump as well.