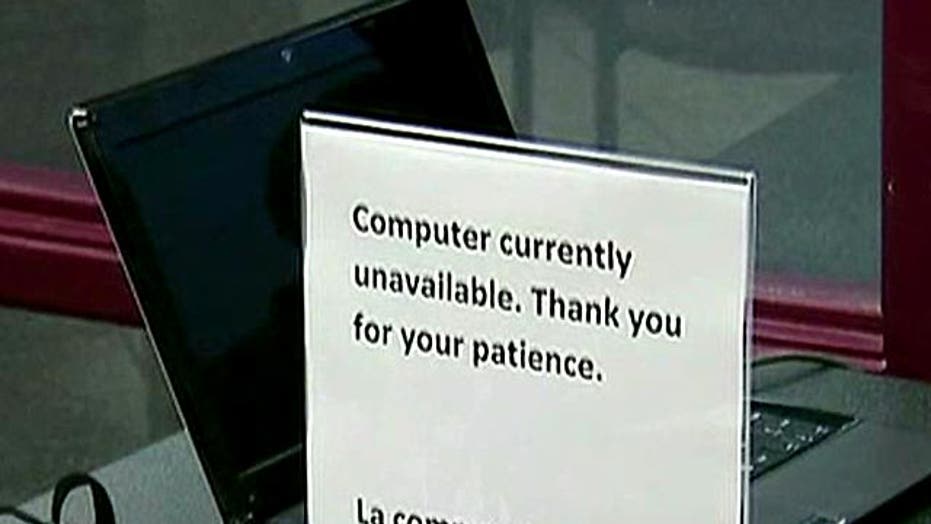 ObamaCare's 'waiting room of the future'

Reported difficulty getting through online, phone on second day of health care law

If Republicans were smart (I know, but stay with me) their focus during the ObamaCare debate should have been less on blocking its implementation and more on a page they might have taken from the Democrat’s playbook, which is to rally the country to its side by use of sentimentality and the threat of impending doom. The good news for Republicans is that there’s still time.

It’s a sure bet Democrats are right now writing sob stories of tearful children barred from the Lincoln Memorial because of the government “shutdown.”

The National Zoo in Washington inexplicably turned off its unmanned Panda Cam, which showed video of the newborn panda cub on the Internet. Boohoo.

A recent CBS News poll found that 54 percent of Americans disapprove of ObamaCare. Republicans should respond with a campaign to encourage citizen outrage.

The Republican Party might create a series of TV and radio ads to run in states where Democrats are vulnerable in next year’s Senate and House races. Here are a few suggestions as to what these ads might highlight:

— Doctors who have quit their practices because they can no longer make a living under the voluminous federal requirements and rising costs of the new health care law would tell their stories. Similarly, because with ObamaCare you may not be able to keep your old doctor, depending on the network you choose, show people lamenting this loss.

Yes, the Democrats could counter with ads showing people who say they had no insurance before ObamaCare and they can now have their chronic diseases treated.

Republicans might respond by saying the insurance “cure” may be worse than the disease and could ultimately reduce the quality and affordability of treatment for many others.

For example, instead of saving $2,500 per person as President Obama promised, according to Forbes magazine, “ObamaCare will add $7,450 to average health care spending for a family of four between 2014 and 2022.”

— People can be shown opening envelopes from their private insurance companies that announce higher premiums, contradicting the president’s promises regarding the low-cost benefits of the Affordable Care Act.

— Show young people who had planned to become doctors choosing other professions, claiming ObamaCare has made the practice of medicine less desirable.

— Provide testimonials from the British, who languish under the weight of a ponderous universal health system, about long waits to see general practitioners, additional waiting time to see a specialist and still more delays for any kind of government-approved medical procedure. The tagline might be, “Take it from us, America. You don’t know what’s coming. We do.”

— Disseminate headlines from British newspapers that report on unnecessary deaths, substandard treatment and unavailable hospital beds in conditions that most Americans would not accept.

If the United Kingdom, whose population of slightly more than 62 million people, is experiencing severe problems and potential insolvency with its 65-year-old National Health Service (NHS), why would anyone believe a government-run health insurance system in the United States and the health care monstrosity that must inevitably follow will be any more successful with a population more than 300 million?

Government, lumbering and inefficient at best, should not be the arbiter of health care.

This battle will not be won in Washington. It must be won in the states. Only when Americans awaken to where ObamaCare inevitably leads will Republicans have a chance of winning the Senate in 2014 and the White House in 2016. Only then might ObamaCare be repealed.

With most diseases, early detection is important. An early repeal of ObamaCare is equally vital — before it has a chance to metastasize.

Ads will help bring the issue home to a wary public.