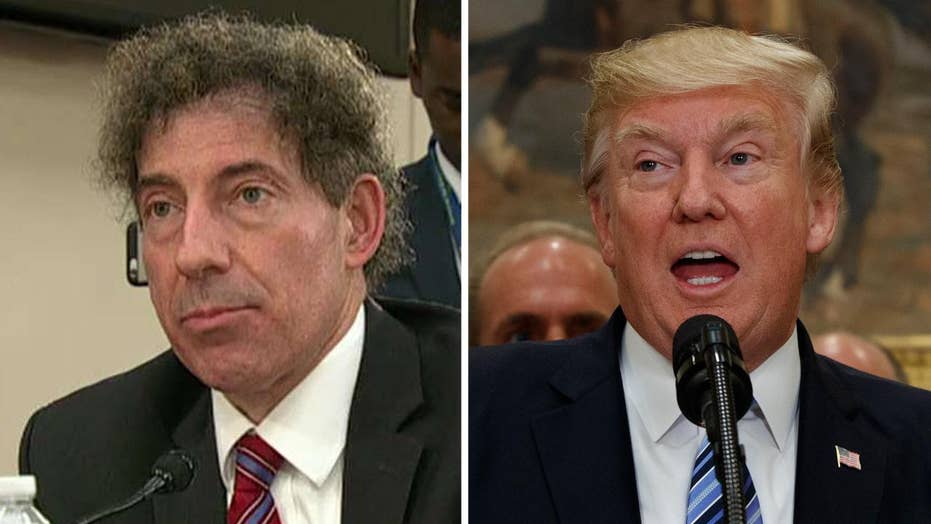 About 25 Democratic lawmakers have signed on to a bill that would create an Oversight Commission on Presidential Capacity.

Their goal: declare the President of the United States mentally incompetent under Section IV of the 25th Amendment and remove him from office.

This is a distraction on so many levels, but it is disingenuous of those lawmakers – ini part, because they know they can’t get bi-partisan agreement, and also because they would need the vice president to sign off on it, too. That won’t happen.

Particularly disturbing is the fact that lawmakers would turn to this as Americans are coming together to celebrate the birth of our nation, this Independence Day.

When accusing the president of Russian collusion and misogyny didn’t stick, it looks as though Democrats have sought a new low: declaring the President of the United States insane. This is a dangerous and petty sideshow. Not to mention it is unethical for anyone except health care professionals to give medical diagnoses.

John D. Feerick is a former Dean of Law at Fordham University who was a chief architect of the Section of Article 25 that the lawmakers are attempting to use. He cites the original congressional debate on the section that he spearheaded, and he says that policy and political differences are not grounds for enacting Section IV of Article 25 to declare the president mentally incompetent.

Only 24 percent of Americans approve of the job Congress is doing. Tactics like this are part of the reason why Americans don’t trust Congress.

These lawmakers are 100 percent Democrat, and this is a partisan effort designed to undermine the work of this president.

In 1964, Democrats used this tactic against Barry Goldwater during his campaign. A news magazine called Fact published a pictorial of mental health professionals who declared Goldwater was unfit for office. Though his presidential bid did not prove victorious, his libel suit against the magazine was. This is commonly referred to as "The Goldwater Rule," and it is the reason why the mental competence argument is almost never asserted against a serving president.

It is unethical to attempt to make diagnoses on living public figures one has not clinically evaluated. This is commonly accepted across the medical and mental health professions.

This is low-brow, even for Democrats who worked with Russian nationals to create a now discredited dossier on the president. This is low for a party who has lost more than 1,000 state and local elections in the past eight years, and is 0-5 in special elections since this Republican president was inaugurated.

Democrats continue this witch hunt because as long as they do that, they excuse themselves from tending to the work of the American people in a bipartisan way. Their problem, in reality, isn’t with this president. It is with the American people who elected him, and continue to support him despite their relentless smears and collusion against him.

This blatant, partisan attack speaks more to the despair of a broken Democratic party than it does to the sanity of a very productive president of the United States.

Dr. Loudon is a behavior analyst and bestselling author who often appears to talk about mental health issues on FOX News and FOX Business.