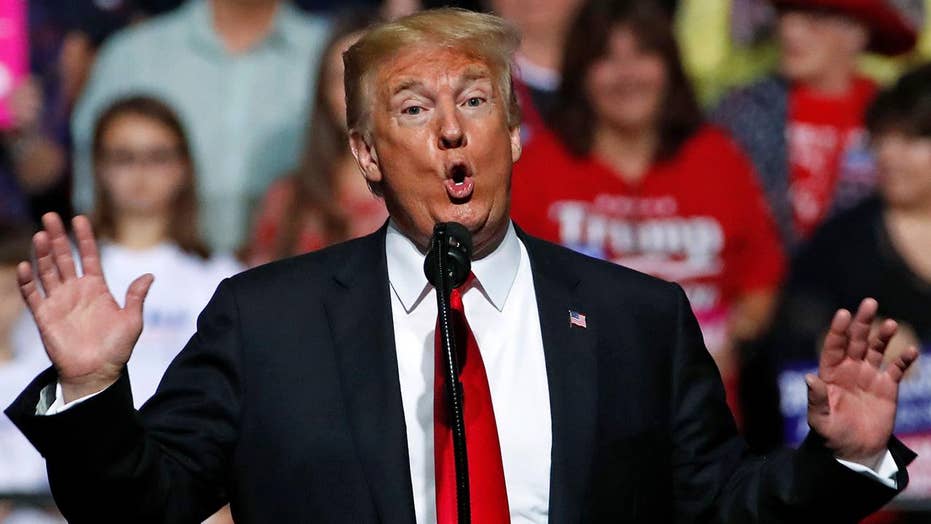 What impact will President Trump's campaign efforts have on the midterm elections? Talk radio panel weighs in.

Rescinding the historic Trump tax cuts will merely be the beginning of the scorched-earth destruction that the Democrats will engage in should they become the majority party in the House and Senate in January.

Here are the 10 things that Democrats will take away from the American people if they win in November:

Your money. When House Minority Leader Nancy Pelosi, D-Calif., said that bonuses stimulated by President Trump’s tax cut were “crumbs” she meant it. And item No. 1 on the Democrats’ agenda will be to repeal the Tax Cuts and Jobs Act. For the 90 percent of Americans who have seen more money in their pockets this year because of tax reform, kiss it goodbye.

Economic growth. One of the first things President Trump did to stimulate the economy was to remove harmful regulations that left our small banks, energy companies and other businesses treading water to stay afloat. Democrats have admitted that they’ll bring back the regulations President Trump removed.

New jobs. If there’s one thing Democrats are good at, it’s killing American jobs. During President Obama’s tenure in office, roughly half a million jobs were shipped overseas to China, Mexico and other countries. According to Obama, those jobs weren’t “coming back.” The Democratic agenda will once again gut Middle America and leave blue-collar workers stranded.

Quality health-care. Democrats have proven that they’ll live and die with ObamaCare. It cost them the midterms in 2010 and 2014, and resulted in rising costs and harsh penalties for millions of Americans. Having ruined the American health-care system, the Democrats now want to impose Medicare-for-all – government-controlled, socialist health-care.

Funds to defend America. Democrats have been seething about military spending ever since President Trump announced his first defense budget. The Democrats apparently have no problem putting our military in harm’s way by cutting defense funding, thereby preventing members of our armed forces from getting the equipment necessary to do their jobs and protect themselves.

Progress on peace. Before leaving office, President Obama told President-elect Trump that North Korea was the most urgent problem he would face – largely because Obama failed to face it. If the Democrats get their way, we can’t count on the backing of Congress for Trump’s peacemaking with North Korea. Progress against Russia’s aggression in Syria – along with moves to rein in Iran’s meddling in the Middle East and its support for terrorism – will also be jeopardized. The progress toward peace that President Trump has fostered in the last 20 months will be undermined by Democratic interference and warmongering.

Secure borders. Democrats simply don’t believe in borders. Much like the leaders of some European countries, Democrats believe that the more immigrants a country takes in, the better off that country becomes and the more altruistic it appears. Their calls to abolish the Immigration and Customers Enforcement agency (ICE) and prosecute ICE officers tells you all you need to know.

Our voices on social media. Time and time again, we’ve seen Democrats defend censorship on social media platforms. They side with the likes of Facebook CEO Mark Zuckerberg and Twitter CEO Jack Dorsey, who believe that the First Amendment only applies as far as they see fit. Our ability to engage in public discourse on online social media platforms will be restricted by their restrictive set of rules.

Stable government. The most dramatic step the Democrats will take if given the chance is to impeach President Trump. The Democrats have been talking about impeachment since before the president’s inauguration. They want to punish him for winning an election they thought was theirs to win. And without President Trump in the way, Sens. Elizabeth Warren of Massachusetts, Kamala Harris of California, or Bernie Sanders of Vermont will have a clear path to victory in 2020 on the Democratic presidential ticket.

The choice is clear for voters Nov. 6. America can continue in the direction it’s going, or backtrack to the ways of the past. We’ve gained so much since President Trump took office. Don’t let the Democrats take it away.