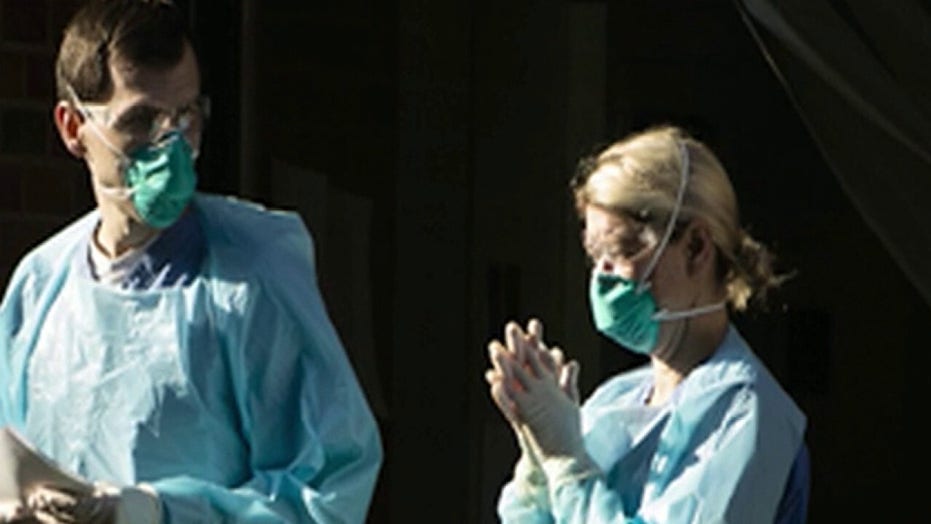 Trump pushes to reopen US economy by Easter

Will the country be ready by then? Dr. Ashish Jha, Dr. Keith Armitage, and Dr. Peter Hotez weigh in.

The Washington Post was criticized for reporting on what two elderly parents thought about a controversial coronavirus tweet written by their adult son.

Scott McMillan, a 56-year-old attorney based outside of San Diego, didn't expect to spark such viral backlash when he expressed solidarity with President Trump regarding the push to revive the economy. The president tweeted on Sunday, "WE CANNOT LET THE CURE BE WORSE THAN THE PROBLEM ITSELF. AT THE END OF THE 15 DAY PERIOD, WE WILL MAKE A DECISION AS TO WHICH WAY WE WANT TO GO!"

McMillan reacted to the president's tweet later that night, tweeting, "The fundamental problem is whether we are going to tank the entire economy to save 2.5% of the population which is (1) generally expensive to maintain, and (2) not productive."

Critics piled on the lawyer for being so dismissive of the older population, who are widely seen as more vulnerable to the virus, as well as for his math, accusing him of allowing roughly 8.2 million Americans to die to save the economy. And despite his small following on Twitter, having less than 400 followers at the time, his tweet exploded on the platform after a screenshot of the tweet was shared by ex-GOP strategist Rick Wilson to his over 766,000 followers.

TRUMP TEARS INTO MEDIA AT CORONAVIRUS BRIEFING: THEY WANT THE ECONOMY TO STAY CLOSED, 'WOULD LIKE TO SEE ME DO POORLY IN THE ELECTION'

"Watch how this becomes the mainstream view on the Trump right," the NeverTrump commentator captioned the tweet, which got over 8,000 retweets and 22,000 likes.

McMillan, a registered Democrat for over 30 years, deleted the tweet amid the viral onslaught he faced from the "alt-left" and "NeverTrumpers."

On Wednesday night, Washington Post senior editor Marc Fisher penned a report about McMillan's viral tweet, which Fisher described as a "lightning rod, a marker of a nation once again divided about the right way forward."

“I am not a coldhearted monster,” McMillan defended himself to Fisher. “I don’t want to take out the old people. But I don’t want the kids coming up today to be akin to the Depression kids. The longer this drags on without people working, the worse it’s going to be. We can’t allow our society to collapse over this.”

The report included the responses Fisher received from McMillan's parents, 78-year-old Jim McMillan and 75-year-old Gloria, who both agreed with their son's tweet.

“I have maybe 10 more years to live,” Jim told Fisher. “We shouldn’t sacrifice the economy to save the elderly. We’re on the short list anyway. To screw up my grandchildren’s future over this, what’s the point of that? Why be selfish?”

“It could sound a little harsh to people, but what he wrote is an accurate description,” Gloria similarly said. “Most people 75 and over have slowed down. We don’t have to go out. And the economy has to be rescued.”

The Washington Post article was slammed on social media with critics who hammered Fisher for going after a non-public figure's tweet and getting his parents involved.

SUNNY HOSTIN SAYS TRUMP ONLY WANTS TO REVIVE THE ECONOMY TO SAVE HIS HOTELS: 'THERE'S SOMETHING IN IT FOR HIM'

"Random person tweets something offensive, and the Washington Post calls the guy's parents and decides to make it a national news story? This is appalling," RealClearInvestigations senior writer Mark Hemingway reacted.

"You found a tweet from a guy with under 400 followers you didn’t like and called his mom & dad. You’re Edward R Murrow incarnate," conservative commentator Stephen Miller quipped.

"Wait. A rando made a bad tweet so you called his mom and wrote a piece attacking him?" Washington Examiner columnist Tim Carney asked.

Speaking to Fox News, McMillan defended Fisher, saying he was "sensitive" about the situation, although he was a bit reluctant when the Washington Post journalist first reached out to him on Tuesday.

"I thought that it was going to potentially be a hit piece," McMillan told Fox News. "It was a good article... It was a fair article. He did fair reporting."

McMillan said Fisher was "very respectful" when he asked if he could talk to his parents, which McMillan agreed after talking to them about it first.

"Marc was a professional, ethical reporter at least with me and my folks," McMillan described the Washington Post senior editor.

Looking back at what he wrote, while he remains unapologetic and still believes in what he said, McMillan told Fox News he regrets making the tweet itself.