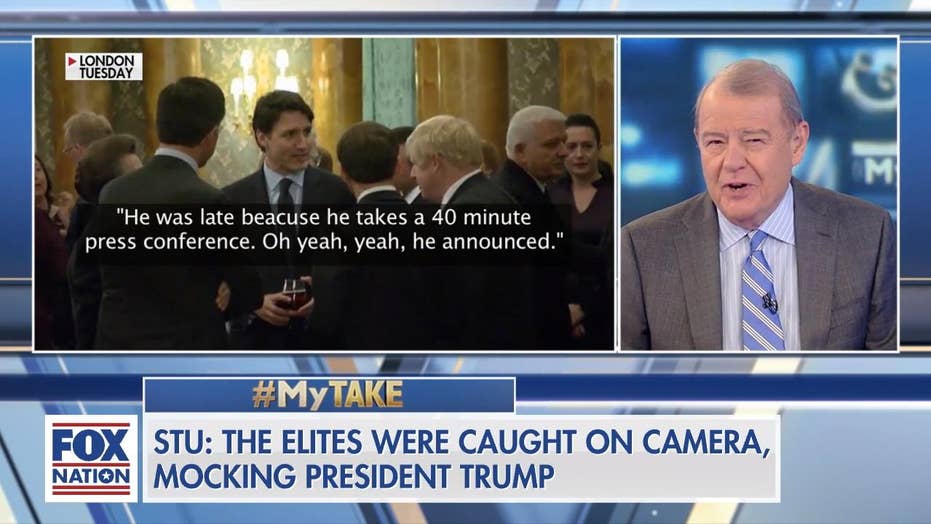 Fox Business host Stuart Varney had some strong words for world leaders, who were shown appearing to laugh at President Trump behind his back at the NATO summit in the U.K. on Tuesday.

"Well, they were caught on camera on mic mocking President Trump. Laughing it up. Chuckling away. Oh, they seem so suave, superior, looking down on our president," Varney said in Thursday's episode of Fox Nation's "My Take," later suggesting President Trump should issue one of his "famous counterpunches" in response.

In a video shared by the Canadian Broadcasting Company (CBC), Canadian Prime Minister Justin Trudeau, British Prime Minister Boris Johnson and French President Emmanuel Macron are seen with others, including Princess Anne, having a conversation at a reception at Buckingham Palace about a press conference earlier in the day.

Trump had given an impromptu news conference and weighed in on the ongoing impeachment inquiry, as well as the fiery exchange he had with Macron over France not taking back any Islamic State (ISIS) fighters.

"Is that why you were late?" Johnson says to Macron in the CBC clip.

"He was late because he takes a 40-minute press conference off the top -- 'Oh, ya ya ya,'" Trudeau said, later adding: "You just watched his team's jaws drop to the floor."

Responding to the now-viral video, Varney fired back at the world leaders, encouraging them to look for solutions within their own countries.

"Canada's Justin Trudeau -- maybe he's trying to recover from the humiliation of being forced to admit that Canada is not even close to paying its fair share to NATO back home. His approval rating is in the tank and his country underperforms America in every economic measure," Varney said.

"Emmanuel Macron, the president of France. He's back in Paris now bracing for a full-scale general strike. France will shut down as Macron's approval rate sinks to new lows," he continued. "And the woman on the left nodding away... That is Princess Anne, sister of the disgraced Prince Andrew, who has been banished from public life. Does she think that's funny?"

"Why Boris Johnson is joining in the merriment, I simply can't imagine," Varney added. "Doesn't he want a trade deal with the president that he's apparently laughing at?"

President Trump slammed Trudeau on Wednesday as "two-faced" when asked about the video during a bilateral meeting with German Chancellor Angela Merkel.

VARNEY: TRUMP IS 'NEGOTIATOR IN CHIEF' AT NATO, WORLD LEADERS ARE 'FEELING THE HEAT

Trump then abruptly canceled a planned news conference with reporters in London.

"When today’s meetings are over, I will be heading back to Washington," Trump tweeted. "We won’t be doing a press conference at the close of NATO because we did so many over the past two days. Safe travels to all!"

While some speculated that the sudden cancelation was due to the president's fragile ego, Varney pointed instead to the simultaneous impeachment proceedings going on in the House, where Stanford Law professor Pamela Karlan faced criticism for bringing up President Trump’s youngest son Barron in a joke, sparking laughs from some in the House Judiciary Committee audience.

"No wonder President Trump abruptly canceled his closing news conference and left town. Perhaps he came home to deal with the insulting treatment of his son Barron during the impeachment hearings," said Varney, echoing the furious response issued by first lady Melania Trump on the matter.

"The Constitution says there can be no titles of nobility, so while the president can name his son Barron, he can’t make him a baron," Karlan said in the committee room, prompting chuckles.

"Would you believe that some in the crowd laughed?" Varney asked. "Baron Trump is 13 years old. Fox News reports that Professor Karlan crosses the street to avoid walking past a Trump hotel. A constitutional scholar, no less. This is another occasion when the elites deserve one of the president's famous counterpunches."

Varney added, "We shouldn't have long to wait."