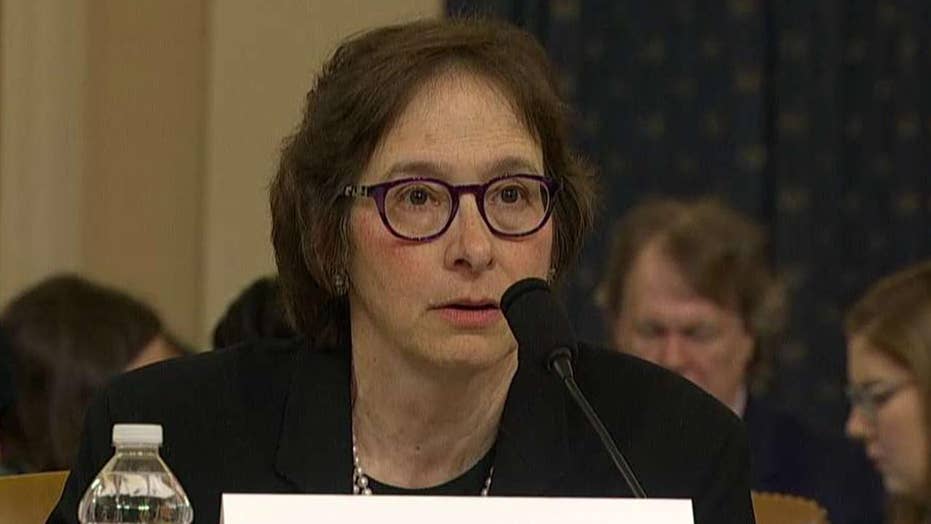 Professor Pamela Karlan: President Trump can his name his son Barron, he can't make him a baron

Impeachment witness Pamela Karlan answers a question from Rep. Sheila Jackson Lee on the differences between a president and a king.

A Stanford Law professor apologized hours after she brought up President Trump’s youngest son during Wednesday's impeachment hearing, sparking laughs from some in the House Judiciary Committee audience -- and provoking a furious response from the White House.

Lawyer Pamela Karlan invoked 13-year-old Barron Trump when trying to make a point that Trump can’t rule like a king.

"The Constitution says there can be no titles of nobility, so while the president can name his son Barron, he can’t make him a baron," Karlan said in the committee hearing room, prompting audible chuckles.

The White House blasted Karlan as “classless” and the Trump campaign called her joke “disgusting.”

"A minor child deserves privacy and should be kept out of politics," first lady Melania Trump tweeted. "Pamela Karlan, you should be ashamed of your very angry and obviously biased public pandering, and using a child to do it."

“Classless move by a Democratic ‘witness’. Prof Karlan uses a teenage boy who has nothing to do with this joke of a hearing (and deserves privacy) as a punchline,” White House press secretary Stephanie Grisham tweeted. “And what’s worse, it’s met by laughter in the hearing room. What is being done to this country is no laughing matter.”

Karlan later apologized, but put in another dig at the president. "I want to apologize for what I said earlier about the president's son. It was wrong of me to do that. I wish the president would apologize, obviously, for the things that he's done that's wrong, but I do regret having said that."

Kayleigh McEnany, the Trump 2020 national press secretary, called on all Democrats to repudiate Karlan and called for the professor to apologize to the Trump family.

“Only in the minds of crazed liberals is it funny to drag a 13-year-old child into the impeachment nonsense,” McEnany said in a statement. “Pamela Karlan thought she was being clever and going for laughs, but she instead reinforced for all Americans that Democrats have no boundaries when it comes to their hatred of everything related to President Trump."

McEnany accused Democrats of having a double standard for former Vice President Joe Biden's son, Hunter, whom the president wanted Ukraine to investigate.

"Hunter Biden is supposedly off-limits according to liberals, but a 13-year-old boy is fair game. Disgusting,” she said.

Karlan was one of three legal scholars testifying at the request of Democrats in the first Judiciary Committee impeachment inquiry hearing. Jonathan Turley, a professor at George Washington University Law School, was the sole GOP witness.

Karlan argued that Trump committed several impeachable offenses and said the president abused his oath of office for personal reasons when asking Ukraine for a “favor” to investigate Democrats.

But the Barron punchline came during questioning by Rep. Shelia Jackson Lee, D-Texas, on how Trump’s conduct compared to that of kings.

“Contrary to what President Trump has said, Article Two does not give him the power to do anything he wants,” Karlan responded.

Then she offered the Barron quip to “show you the difference between him and a king.”

"It does not lend credibility to your argument. It makes you look mean,” Gaetz said.