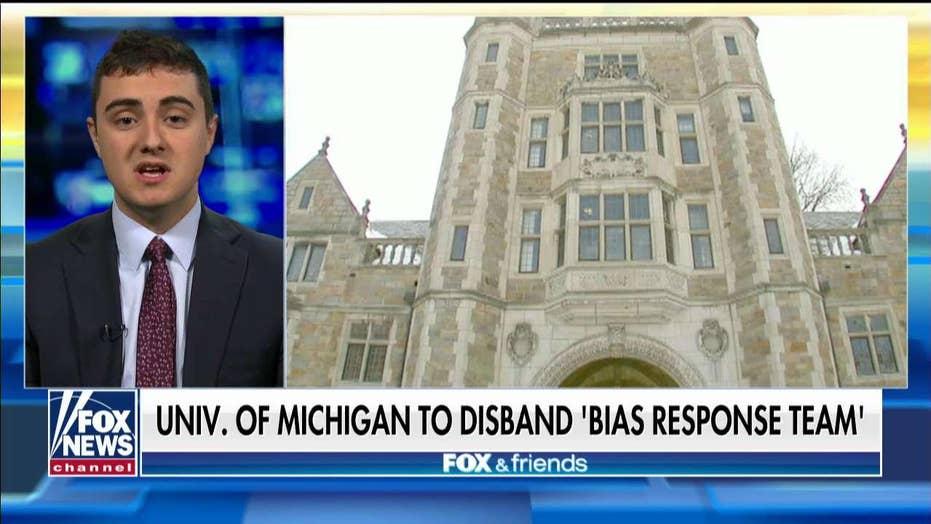 In a victory for free speech on college campuses, the University of Michigan announced it would disband its "Bias Response Team."

After a nearly 18-month legal battle, Judge David McKeague of the United States Court of Appeals for the Sixth Circuit announced that "The very name 'Bias Response Team' suggests that the accused student's actions have been prejudged to be biased."

First Amendment watchdog Speech First settled a lawsuit with the school over its "subjective" speech policies. According to the settlement, the university will maintain its new definitions of "bullying" and "harassing" and will eliminate the Bias Response Team. The team will be replaced with "Campus Climate Support" or CCS.

The Department of Justice (DOJ) also filed a Statement of Interest in the case.

Appearing on "Fox & Friends" with hosts Steve Doocy and Ainsley Earhardt, Campus Reform Correspondent and University of Michigan student Austin McIntosh said he was happy the Bias Response Team could no longer act as "language police."

"If somebody found something hateful, or if they understood it as hate speech or offensive, then they could report you and you could face punishment from some bureaucracy from the college," he explained.

He told Doocy he was attacked by a classmate last week just for sharing his conservative ideals, noting that campuses "aren't doing a whole lot to protect freedom of speech either."

In October, University of Michigan spokesperson Rick Fitzgerald said that the settlement "makes it 'abundantly clear' the lawsuit was unnecessary. ...Vigorous debate on all sides of an issue has been a hallmark of this campus before and during the lawsuit. We have confidence that true diversity of thought will continue to flourish on our campus."

McIntosh told the "Fox & Friends" hosts that he believes the campuses which still have Bias Response Teams "inhibit our freedom of speech."

"I think that these bias response teams create an environment where -- they live in this liberal bubble...and when you bring in your conservative morals and values it pops and people get upset. And, it's sad to see," he said.